For the past four decades, Larry Fessenden has been crafting some of the best, most personal and idiosyncratic movies on the independent horror scene, and has produced dozens more via his Glass Eye Pix. With a major retrospective of his and his company’s work now underway at New York City’s Museum of Modern Art, RUE MORGUE spoke to Fessenden about his history and influence in the genre, as well as his genre acting gigs and what’s coming next.

“Oh, the Humanity! The Films of Larry Fessenden and Glass Eye Pix” is showcasing both virtual and in-person screenings of Fessenden and co.’s features. The man himself is represented by the don’t-tamper-with-nature thriller NO TELLING, his semiautobiographical vampire drama HABIT, the mythological chillers WENDIGO and THE LAST WINTER, the killer-fish flick BENEATH and the FRANKENSTEIN variation DEPRAVED. Other notable movies in the lineup include his son Jack’s STRAY BULLETS and the new FOXHOLE, Ti West’s THE HOUSE OF THE DEVIL and THE INNKEEPERS, Jim Mickle’s STAKE LAND, Glenn McQuaid’s I SELL THE DEAD, Ana Asensio’s MOST BEAUTIFUL ISLAND, Joe Maggio’s BITTER FEAST, Jenn Wexler’s THE RANGER, James Felix McKenney’s AUTOMATONS, Graham Reznick’s I CAN SEE YOU and more. (For the full schedule and more details, click here.)

With such an expansive retrospective now playing in New York, how does it feel, looking back over Glass Eye’s filmography after all these years?

I like to imagine that the tone of our movies is sort of personalized horror, and that that was unique back in the ’90s, when we started. And then I was lucky enough to meet like-minded people such as Ti West and Kelly Reichardt; she doesn’t make genre films, far from it, but there’s a sense of observation in her work, and you see that in a movie like Ti’s THE HOUSE OF THE DEVIL (pictured below): the same fetishizing of detail and character motivating the stories. Obviously, HABIT is a very personal film of mine, and then WENDIGO is in a way personal as well, but I bring in mythologies and other horror tropes. 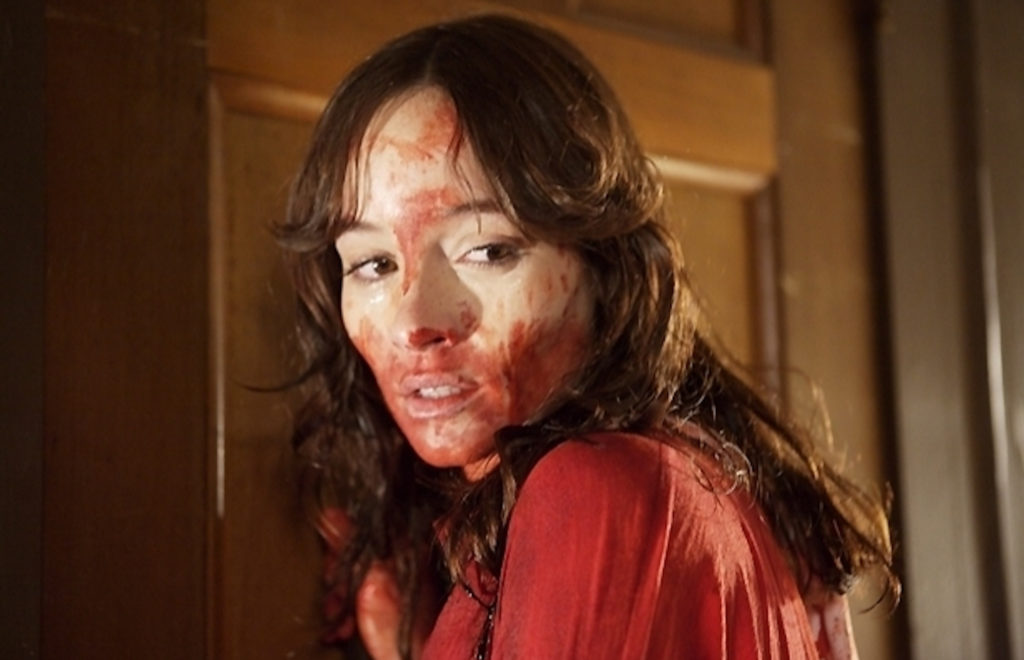 So what I like about Glass Eye is that all these movies are connected in some way, in approach and attitude. And then there’s always the aspect of craftsmanship and building a community of people who love the details in the work, like Graham Reznick, who did Ti’s early sound design in all his movies, and had great theories about that craft, and then he worked with Jim Mickle and Joe Maggio and some of the others. And Joe Maggio wasn’t a genre filmmaker either–he told personal, low-budget stories–but I loved his stuff and asked him to do a genre film. So I benefitted from meeting all these other filmmakers, and encouraging them to work at Glass Eye.

I really hate to use this word, but you were elevating genre cinema before “elevated horror” became a catchphrase. Do you see Glass Eye as ahead of the curve, and a predecessor of companies like A24?

Well, A24 of course is working with Ti West [on X], so there is a through-line. I love the recent horror films like THE BABADOOK, IT FOLLOWS, THE WITCH and HEREDITARY. Those are all remarkable recent genre films that are also dramas, and concerned with themes that are often associated with indie dramas: family deterioration, mental illness, all that sort of thing. Not that you want to become a hand-wringing sort of genre, but the reality is, that was what these movies were always about. When you see WHAT EVER HAPPENED TO BABY JANE?…that’s just a random classic, but you can go even further back, and these themes always existed in horror movies. ROSEMARY’S BABY, THE OMEN…these are films about families and struggling with darkness.

But yes, I believe Glass Eye was an early adaptive of this idea of the personal, elevated horror film, treating it not as a body-count genre–and in a way, to our detriment, not always for kicks. I mean, that’s essential to say: Not everybody likes our movies; they’re a little bit headier, they may be slow-paced, because their agenda is not simply the shocking and the gory. It’s more of a mood agenda. So they’re not for everyone, but I think it is an essential niche.

You mentioned Ti West and A24, and X, which employs a number of your past collaborators, is kind of the best Glass Eye Pix movie that Glass Eye never made. Did West ever discuss that one with you?

Oh, no, because I was never able to raise that much money. Of course, I raised money for THE HOUSE OF THE DEVIL with my fellow producers Josh Braun and Roger Kass, which is how I hooked up with Greg Newman’s company MPI, and that started a long relationship: We made THE INNKEEPERS, STAKE LAND, BITTER FEAST, LATE PHASES… But in general, I usually produce people’s early films, and then they graduate and move on, and take what they’ve learned and go off into the real world. The nice thing about Ti is that he always reaches back. He put me in his Western, IN A VALLEY OF VIOLENCE, and he always sends me scripts and we talk about whatever. And of course X was produced by Jacob Jaffke, who came up through Glass Eye, and Peter Phok, who did the same, and Graham did the sound on X. So there’s a continuity, always, and that’s what nice. Jim Mickle always picks up my calls; even recently, I asked him about an actress, and she’s in a new Glass Eye movie, someone he knew. These are relationships that were forged at the beginning, and they’ve lasted.

In recent years, you’ve been making more appearances in other directors’ movies, in larger parts. In JAKOB’S WIFE, you have the second lead, and you had a sizable role in WE ARE STILL HERE.

Yeah, well, JAKOB’S WIFE was wonderful, and that came about because I knew Travis Stevens and Barbara Crampton. We also have TALES FROM BEYOND THE PALE, the audio dramas I do with Glenn McQuaid, and that’s been a great way to meet other actors. I’ve met Vincent D’Onofrio on that; I don’t think he’s gonna call me for anything, but the point is, it’s a secret weapon to also be an actor, because you end up on bigger sets and you meet people, and it’s a thrill but it can also sometimes lead to a collaboration down the line. You know, I’ve worked with Bill Murray and Adam Driver [on THE DEAD DON’T DIE], and all kinds of stars, which is fun. But then I go back to my little camp, and they won’t take my calls [laughs].

And then I was just in BROOKLYN 45, Ted Geoghegan’s new film, which was a wonderful experience. It’s been tough with COVID, navigating through production, but we worked with protocols in place and had a great shoot this past December. I worked with Jeremy Holm, who starred in our movie THE RANGER, and I think he was cast because [director and Glass Eye vet] Jenn Wexler recommended him. So that’s nice; you see it just go on and on.

Can you say anything more about your role in BROOKLYN 45?

Just that I had very well-combed hair [laughs]. It’s a very special movie, because it was all on one set, it takes place all in one night; it sort of unfolds in real time. I think it was very personal to Ted, because he wrote it in collaboration with his dad, and it’s about themes of war and heroism. That’s interesting because my son just made a war movie called FOXHOLE, which I’ve been very involved with for a couple of years, because we shot it and then we were in COVID and it took a long time to finish. So it was funny to suddenly find myself involved in a couple of war movies, and really thinking about that sort of commitment in life, and what it takes and what bravery means, and what we’re fighting for and democracy and all that heady stuff. Ted’s movie, of course, will be great fun; there’s all kinds of ghostly things going on. 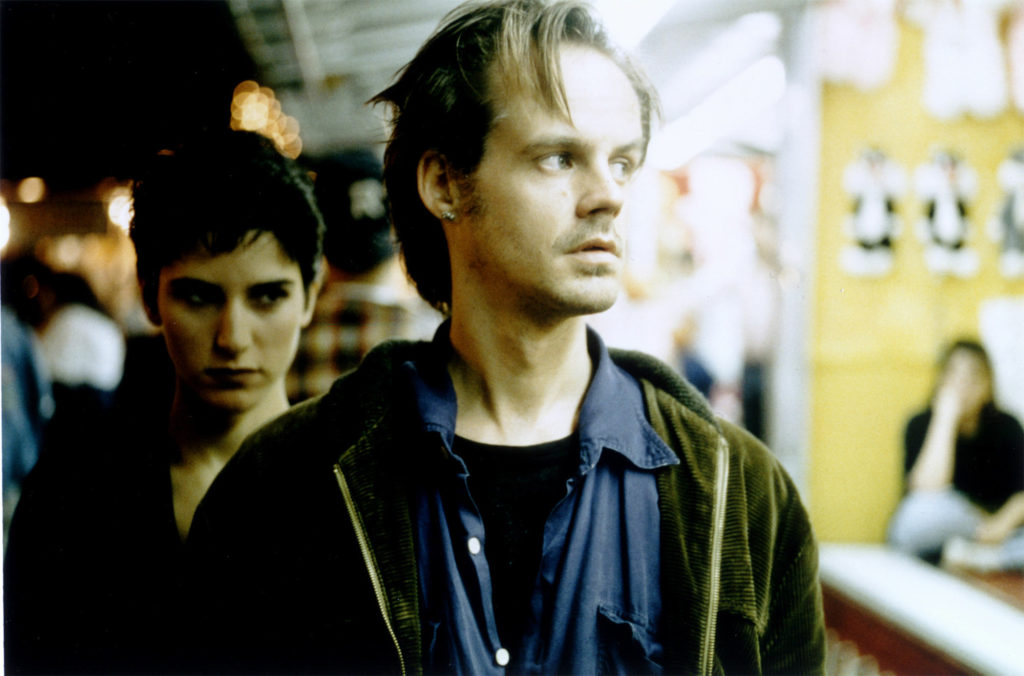 Would you ever want to star in and direct a film again, as you did in HABIT (pictured above)?

Oh, yeah! I’ve always threatened to remake HABIT, and I’ve lately thought that I really need to get on with it, because time is running out. You know, do people want to watch a 60-year-old traipsing around? Now, maybe I’m shortchanging audiences; obviously, there’s great movies with older leads, but that’s sort of the stumbling block. Personally, one reason I’ve stayed in the independent world is that I like having a certain amount of control, but also the interplay of all the jobs on a set. I like building the set, and I want to be in the art department, and then I want to act, so to me it’s a more personal, handcrafted medium than when you do a big film, and everything is designated. That’s a great talent as a director, to designate well, but sometimes I just want to get my hands in. So I really enjoyed making HABIT, because I was in it and I could direct from the inside, and kind of move the scene where I wanted. Subtly, of course; I was still working with the script.

You also did voiceover work on the animated horror/fantasy THE SPINE OF NIGHT.

Well, I really enjoyed meeting the two creators, the co-directors. That’s a special movie, though my stint on it was very brief, but it’s wonderful as an actor to be involved in interesting projects and meet the filmmakers, and gain the insight into how they make their movies. Everyone has an origin story; that’s the nature of movies.

Having taken part in the animation process with SPINE OF NIGHT, have you thought about Glass Eye doing animated films?

Well, my wife Beck Underwood is a stop-motion animator, so there’s always a great affection there. And actually, when I did CREEPY CHRISTMAS, a little holiday-themed, spooky film festival of 25 different artists offering their little Christmas movies, I’ve been lucky to get one of the 25, and I always do animation. I do my own stop-motion, alone; I made a short called WILD RIDE, and one called SANTA CLAWS, and I really love the process. We have a movie at MOMA called THE PAST INSIDE THE PRESENT that’s 7,000 hand-drawn pictures, really cool, almost a form of rotoscoping, which is what SPINE OF NIGHT was. And even in my own feature films, I use pixilation and animation; WENDIGO has a lot of those techniques.

So I love all the different textures that are possible in storytelling, and that’s why I love horror, since it allows for more surreal and visionary expression, because very often they’re subjective. They’re frequently about madness and the darkness, so you’re allowed to use more unusual cinema tricks that might not make sense in a normal drama, you know?