Few authors plumb the darker depths of history in a more thrilling, empathetic way than novelist Erika Mailman. This weekend there will be two opportunities to traipse amongst the shadows and time-hop with the author (pictured above).

From her brilliant, reality-refracting exploration of witch-hunting and perversions of faith in 16th-century Germany (THE WITCHES’ TRINITY) to a thrilling tale of cat and mouse between a wily prostitute and a serial killer in Gold Rush San Francisco (WOMAN OF ILL FAME) to her ingenious reappraisal of the infamous Lizzie Borden murders and a vision of how that violence might continue to reverberate in the present (THE MURDERER’S MAID), Mailman’s work is both revelatory and relevant, opening new windows into the past to help us better understand our present. Tomorrow night, September 25, Borden will spring into renewed, vivifying life via Zoom as part of the Stories on Stage Sacramento 2020 program, where the ultra-talented writer and actress Nicole Berry will perform excerpts from THE MURDERER’S MAID live. Then, on Saturday, Mailman herself will host a virtual workshop entitled “Delving Into the Past,” a “three-hour session on using research to craft a historical novel.”

Ahead of this dark historical-fiction double-header, RUE MORGUE spoke with Mailman and Berry about the often surprisingly porous wall between past and present, the challenges and joys of creative reinterpretation, discovering witches in the proverbial family closet and the feminist inspiration and fuel that drives Mailman’s work ever forward.

Erika, do you recall your first encounter with the Lizzie Borden story?

ERIKA MAILMAN: I can’t remember exactly when I first encountered this story, but I know I was young. As you know, morbid New Englanders jump rope to a rhyme about her and how many whacks of the ax she gave her father and stepmother, respectively. It’s actually a little humorous, because it involves a “pause” between the two murders where Lizzie contemplates what she has done, and then does more–and with more violence. There was a real-life pause, too, although interestingly, the murders were reversed in terms of when done and when discovered: Lizzie’s father Andrew was discovered first, but the stepmother Abby had actually been killed hours before he was. And Abby was given more blows, nearly twice as many as Andrew–although not as many as the rhyme claims–and one was even on her face, which means at one point she faced her attacker.​ 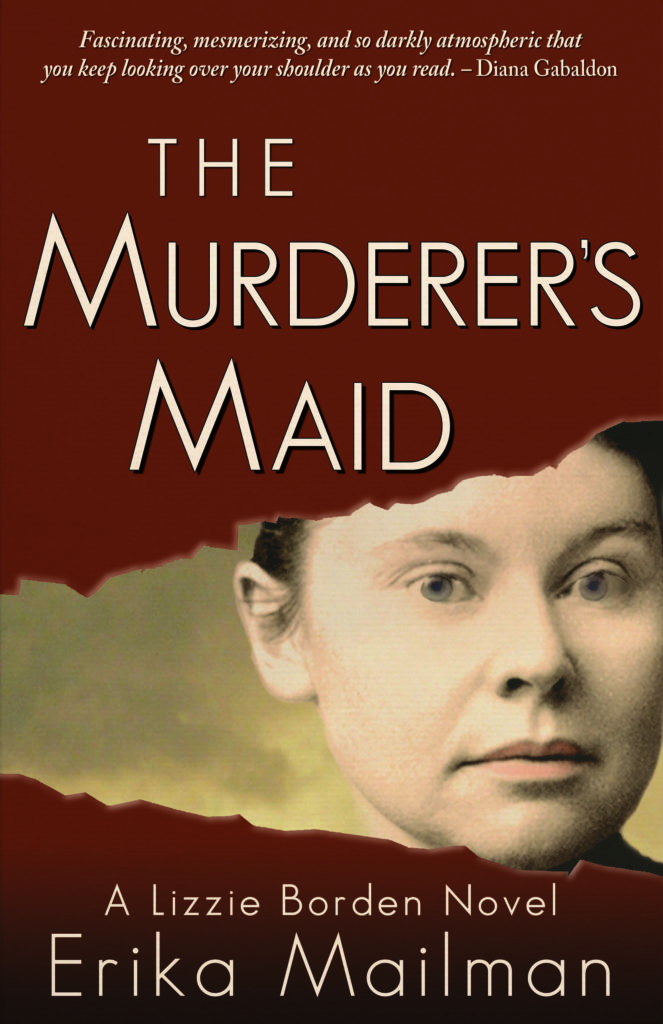 When did Lizzie begin to occupy enough space in your mind that you decided to build a book for her to live in?

MAILMAN: I had wanted to write about Lizzie Borden for years before I finally embarked.

The idea of a professional and passionate actress like Nicole Berry channeling a piece of fiction like THE MURDERER’S MAID is exciting. It would be preferable to see it in an actual theater setting, of course, but it feels like a great opportunity to get a very intimate window into the work.

MAILMAN: I am so incredibly jazzed to have this experience–and it had crossed my mind too that this was perhaps similar to how it must feel to see one’s work on the big screen. I haven’t worked with Stories on Stage before, and many times before the pandemic had wanted to attend in person. They have been around for a decade and are well-known as a wonderful theatrical/literary happening in Sacramento. I believe that when the events took place before COVID-19, there would be two actors with the benefit of performing with each other, plus having the live audience and their audible reactions. I’ve watched several of the Zooms and realize what a feat it is for an actor to do this alone without an audience other than the screen in front of them. It is impressively vulnerable.

Is there anything about Berry’s approach that feels particularly synergistic with the work to you?

MAILMAN: I met Nicole at a mixer for the Sacramento Film Foundation. She was there as an actor and I was there as a screenwriter, and we happened to plunk down next to each other in the audience and start talking. I liked her, her energy and the fact that she reminds me of one of my sisters a little bit. I watched an audition tape she has on her website and thought she was wonderful. She has the element of being potentially dark and twisted–a great person to narrate Bridget, whose life was very strange. Nicole has an intensity that I think will work really well for this selection, which is the horrifically grisly “discovery scene” where poor Bridget wakes from a nap to hear Lizzie Borden calling up to her from two floors below that her father has been killed–and comes downstairs to confirm. I put Nicole’s name forward and was delighted that the casting director, Jessica Laskey, agreed that she would be amazing for this.

What drew you to the project, Nicole?

NICOLE BERRY: Stories like this are so far under our skin, they’re virtually in our DNA–the crux of the draw being humankind’s seemingly infinite struggle with finding, and maintaining, truth, justice, reality and consequence. And, really, these things boil down to a concentrate of interpretation. Human minds are ever busy interpreting information into beliefs and disbeliefs, likes and dislikes. But some things remain a mystery! We’ll never know the truth about the Bordens. We’ll never know why, either. Was it a crime pivoting on wealth, insanity, or abuse? Humans lustily speculate and cast opinions around, but in a deeper sense, a lack of answers provokes examination. Examination of situations, individuals and constructs. Examination can prove entertaining, trying or even tragic, but it is also integral to human progress. I think the examining mind is quite pertinent to the current times.

Also, the casting director and author are such a pleasure, and women of remarkable talent. It’s a fabulous group putting the event on. It’s meaningful that creatives meet–physically or virtually!–and support one another. I love being a part of it.

Erika, your author bio accompanying THE WITCHES’ TRINITY notes that you trace your roots to “a Massachusetts relative who twice stood trial for witchcraft”! Do you think having a connective thread to that sort of historical madness creates space for building empathy?

MAILMAN: It’s so uncanny: I first learned I was descended from a woman who underwent two–maybe three–witchcraft trials when I was writing a book about a witch. I still remember being at my computer when I received an e-mail from my mom saying, “Take a look at this link; it’s to a website about our ancestor Mary Bliss Parsons, who was a witch.” It was a total mind-blow. I feel like there was something to that history coming back through my veins. My ancestor was acquitted, thank God, and died an old woman, but my character–who I set in medieval Germany because I’m also German through my father’s side–isn’t sure whether or not she’s innocent. I’m highly intrigued by stories of inherited experiences through our DNA; there is some article I remember reading about how when you’re pregnant, you’re actually receiving some cells from your baby–microchimerism–and I love discussions of how we are all connected at a cellular level.

Anyway, the book was published under the name THE WITCHES’ TRINITY, but my title had been HEXE, the German word for witch, and I dedicated it to my ancestor. Through other descendants of Mary Bliss Parsons, I started attending the West Coast Parsons Family Reunion and met extended family members, one of whom I’m strategizing with to do some kind of a project about Mary. I’m not sure I answered your question, but I’ve probably gone on long enough.

There seems to be a thread running through your work concerning female autonomy and opportunity–and the tragic consequences in both a micro and macro sense when one or both are denied. Do you see your work as cautionary tales?

MAILMAN: I love this question. And what a cool diagnosis you’ve made that in my books, when people don’t give over power to women, death happens! Fist pump. I really hadn’t thought of it that way, but in my three adult novels that is absolutely the case. I’m a lifelong feminist, proud of the word, proud of the work my forebears did to make my life so much easier, grateful to pioneers like Gloria Steinem, Ruth Bader Ginsburg and so many others. It is probably no coincidence that I choose to write about time periods when women struggle to carve out their own futures. And yes, they are cautionary tales. Hand over all the power to women, right now.

Nicole, can you talk about the challenges and joys of bringing a multilayered work like THE MURDERER’S MAID to life on stage?

BERRY: In the life of the modern-day artist, one of the most persistent challenges is technology [laughs]. For this sort of project, creating a good eye-line, lighting, recording of visuals and sound. Then there’s sharing the event around. It’s fairly basic stuff, but still gives me a shiver. My cable and electricity have gone out multiple times this summer, too. I can’t always count on the schedule I’ve projected for home studio projects.

Creatively speaking, one of the main challenges with this story is putting on an accurate Irish accent for Bridget, while keeping the product an easy listen for American ears. There are a lot of subtle considerations for every performance piece. Putting on a performance like this one means I should aim to have it attractive in a modern way while honoring the story era and the authorial tone. Putting together a look, a background and doing a bit of study with the written work. For instance, I have selected a dark, velvety, high-button coat that has a sort of 1890s vibe to use for the reading. It’s semi-period-appropriate and mood-appropriate. It’s a tiny detail that helps bridge the art to the audience. These sorts of details can be very fun and make a real difference without being too overt.

As a performer, the presiding goal is to serve as a conduit; to interpret another person’s art for presentation to an audience. It’s a great responsibility and great fun, alike.

Erika, you’re also running a workshop on writing the historical novel on Saturday. Obviously, we’re all looking for more solid grounding these days. What has building worlds in the framework of the past taught you about the present?

MAILMAN: I know people say, “Those who don’t remember history are doomed to repeat it,” but I feel like I remember it and I’m still doomed, dammit. Historical fiction demonstrates how cyclical thought is over the centuries, which can be comforting or not, depending on how you think we have progressed as people. I like teaching historical fiction because I enjoy the task of collating down a ton of information into a chunk the writer can grapple with. It’s really easy to get overwhelmed by research and give up–or step away for an intermission that becomes permanent. I’ll have some tips for how to avoid that.