Opening today from Screen Media in New York (IFC Center, Alamo Drafthouse Cinema City Point, Nitehawk Cinema Williamsburg) and Los Angeles (Laemmle Monica, Laemmle Playhouse 7), with a national release to follow, LUZ began as Singer’s film-school thesis project before it grew to feature length and won raves (including ours) at numerous fests. Luana Velis stars in the title role, a taxi driver who turns up at a police station late one night in a deranged state. Psychiatrist Dr. Rossini (Jan Bluthardt) tries to get into her head to determine what sort of demons are plaguing her—little knowing at first just what kind of demon he’s dealing with. Shot on gritty 16mm, LUZ employs hallucinatory visuals and a dense, evocative sound design to create a unique and frightening cinematic experience. We spoke to Singer following the movie’s second Fantasia screening, where word of mouth from the first resulted in turnaway business.

Since this was your thesis film, was it always intended to be feature-length, or was it expanded as you went along?

It did get expanded. My first draft was maybe 30 minutes long, and didn’t yet have the supernatural element; it was more or less the middle scene, the interrogation. That got lengthened when more of the demonic elements came in, and it grew organically into a 70-minute film.

Were your instructors aware that you were making a movie that was going to be a feature?

Yes, and they didn’t really care, in a positive way. My production professor, when I gave him the script, told me, “You know, you wrote somewhere in the description that this is going to be a 30-minute film, but it’s clearly going to be at least 45 or 50 minutes. You should be honest about that, and think again about how long this will be.” We never produced this for distribution, but I knew I wanted it to be either below 30 minutes or above 60 minutes, because that’s what most festivals ask for regarding a short or a feature. 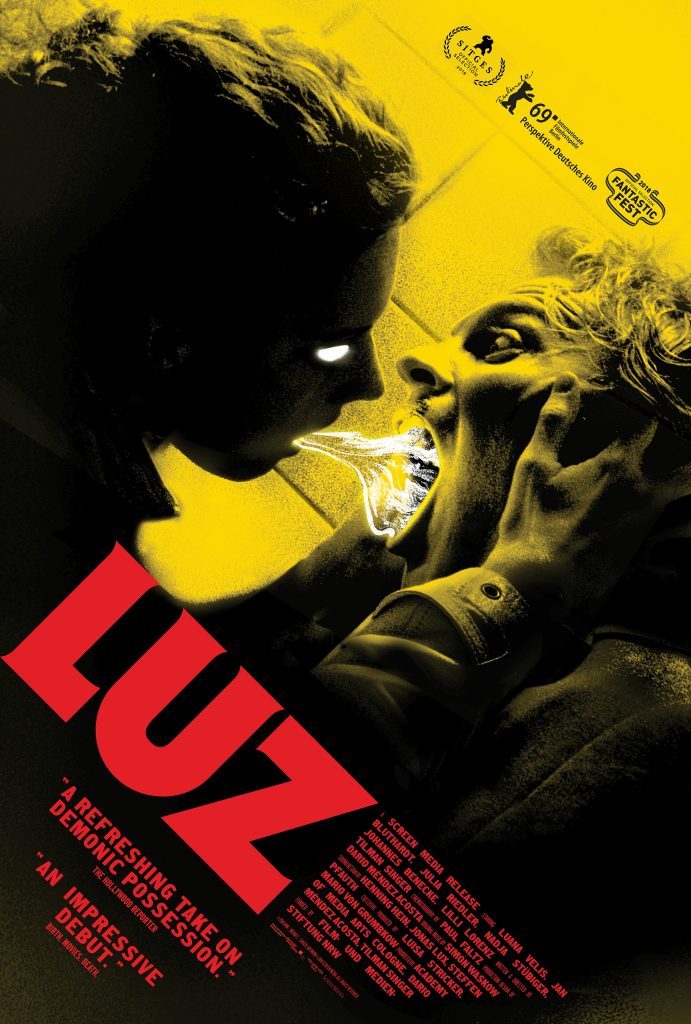 Did the idea for LUZ first come to you as a series of images, or did you come up with the story first and then the way to tell it visually?

Both, I would say. The first thing I had in mind was some images; the initial one I had a concrete idea of was some version of that interrogation, where I could have multiple layers of reality in sound and image, and how they would work with each other. I thought that would be very cinematic, ready-made for film language. At some point, I started to plot out the story, and there was a lot of structuring, but in a weird, convoluted way. I knew I wanted to have an introduction to the interrogation, and a little bit of an aftermath, and those were not easy to write. I had a lot of notes, saying that now I have to put a little bit of information here, here and here. I do write in images, though—or maybe not even in images, more like an atmosphere, a feeling of a certain tense moment or a romantic moment. It could also be music, but it always starts with a feeling.

What inspired the decision to shoot on 16mm?

It just became very important to me to shoot on film. I was lucky that in my first semester, there was a seminar where we went through camera history and film-recording history. We had an exercise where two students were given a reel of 16mm, half a day or a day in the studio, and you could do whatever you wanted. So a friend and I did a Western on 16mm, so we were introduced to the camera and how to load film, how you do all the tests in advance, and it was so fulfilling compared to what I’d done before with digital cameras. Not being able to see what you’re shooting, being super-prepared and planning it all out, filming it, sending it off to a laboratory and seeing it later, with completely fresh eyes—it was magical.

How would you describe LUZ in terms of its place in the horror genre, and your personal approach to the genre?

I’ve always been a great fan of scary and supernatural stories, ever since I was a small child. I don’t know where it came from, but I remember that when my grandmother took care of me while my parents were on vacation, I forced her to tell me all the horror films she’d ever seen—and I think she just invented them, because she never saw any! That was before I was allowed to see any monster movies. I believe the genre is a fantastic vehicle for telling stories, a way to deal with the kind of violence or catastrophe a human being can experience without clearly naming it, so you can be more emotionally connected to it. But I didn’t write LUZ with a genre in mind; it just came naturally.

Did you ever consider getting hypnotized yourself as part of your research?

I did, and I tried it one time, and it didn’t really work on me. It wasn’t with one of those shady guys you see on YouTube; I had a talk with a hypnotherapist, but I wasn’t really receptive to it. Maybe I’m just not the right person, or maybe I read too much about it and overthought it, because it doesn’t work on everyone. The question came up a lot: Do you believe in it? I think it’s very much a real thing: You can put receptive people in a trance, and they will be in some weird state between sleeping and being awake, where you can tell them subconscious things that will seem real. But it’s not magic, you know? It’s not like voodoo or anything.

What was the situation like on set, especially when you had the smoke machine going and actors walking around naked and covered with blood?

We had a great time. It worked incredibly well, especially for a student film. We were very disciplined. It was hard because it was shot during the hottest days of the summer, and we always shot during the day; we only pretended it was at night, and we put black foil and fabric on all of the big windows of the office building, and behind the lens. It just got so hot in this room, and then I think we spent three days in that one room completely filled with smoke. You could barely see, like, as far as we’re sitting from each other. That was very hard, and sometimes you started to trip, because you lost a little of your orientation, your balance. We were very respectful when there was a nude scene, and the only people in the room were those who really needed to be there. We shot that at the end, when the team knew each other and we were kind of in the flow.

Sound is very important to LUZ; how did you find your composer Simon Waskow and sound designers Jonas Lux, Henning Hein and Steffen Pfauth, and how much time did you spend getting the sound right?

A lot of time. Most of what you hear in the final mix was described in my screenplay. I was lucky that I had been able to shoot my previous two short films with the same team, basically, and I had the same composer on board, Simon, a great friend who I’ve known since we were teenagers. I played in indie bands with him, and we grew up making music together. So now, whenever I write a script, I leave space for him to fill. For example, in the whole very slow opening of the film, I told him, “You’re going to do the narration there. She’s just going to come in, drink a soda, then yell at the guy. Please make it so it’s engaging.” I wanted a very slow, theatrical entrance, and the corridor is like an abyss going very far down, to get the audience in the mood that this was a slow-burning film.

How has it been to watch LUZ with audiences?

It’s been great. I didn’t watch it the first time, at the Fantasia premiere, because I’ve seen it so often and now when I watch the film, I only see what I think could have been better, that edit is not quite right, etc. The second time, though, I stayed for a little while, and the sound system of the smaller cinema at Fantasia is so good; I never saw LUZ with such great audio before. I heard so much of what the sound designers built, like the street outside the police station, and I was so captivated by that. The thing I like is that the film makes the audience very quiet, because they’re kind of zoning out while watching it. That was my plan, to hypnotize the audience [laughs] while the people are being hypnotized in the film! LUZ is the work of so many great people, and I can watch it now and think, “Oh, I never heard that on the soundtrack,” or see different things in the production design. There are so many carefully made details in it that I can still feel like I’m watching it for the first time. And then it’s nice when it’s over, and you do the Q&A and look out at a bunch of happy faces. That’s such a pleasant thing, and the screenings have had a really nice vibe.