The latest slow-burn horror sensation is writer/director Osgood Perkins’ THE BLACKCOAT’S DAUGHTER, which chilled audiences to the bone at multiple festivals last year under the title FEBRUARY. Currently a DirecTV exclusive, it hits theaters and VOD this Friday, March 31 from A24 and DirecTV, and Perkins delves into its meaning and menace in this exclusive chat.

The son of legendary PSYCHO star Anthony Perkins and actress/photographer Berry Berenson, Perkins began his film career appearing as young Norman Bates in PSYCHO II and acted in numerous other films, including WOLF and DEAD & BREAKFAST. He turned to screenwriting in the 2010s, co-scripting Nick Simon’s REMOVAL and THE GIRL IN THE PHOTOGRAPHS and Tze Chun’s COLD COMES THE NIGHT; his second feature at the helm, I AM THE PRETTY THING THAT LIVES IN THE HOUSE, beat DAUGHTER into general release last year.

His debut feature is certainly a tough act to follow, telling the quietly blood-freezing story of three young women in the cold eponymous month. Two of them, Kat (Kiernan Shipka) and Rose (Lucy Boynton), are left alone with just a few adult supervisors after all their boarding-school classmates have gone home for winter break, while Joan (Emma Roberts) has apparently escaped from a mental hospital and is making her way in the same direction. The horrors build incrementally toward a gasp-inducing climax, in a film touched by real loss; Perkins was inspired toward this tale by the tragic deaths of both his parents (his father from AIDS, his mother on 9/11) in the same month during different years… 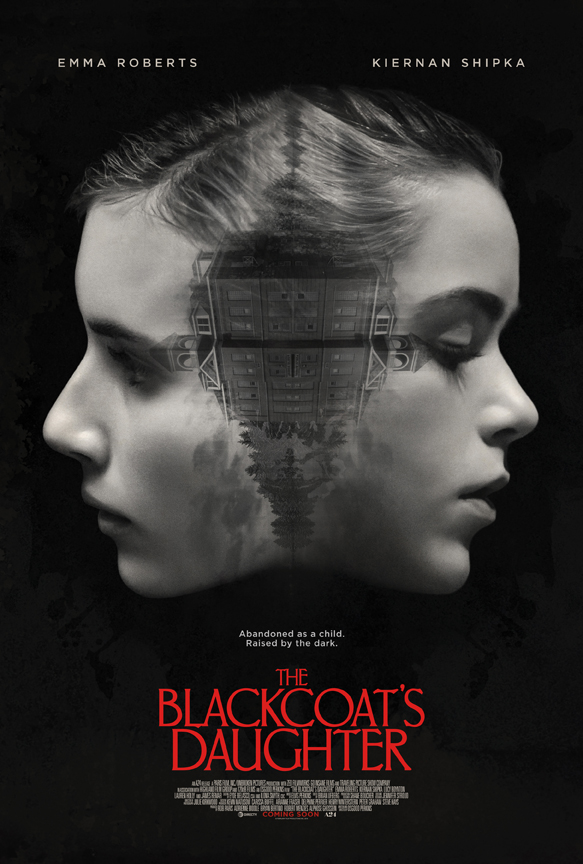 Can you talk about your initial inspirations for the film, and also the meaning of the original title?

My original intention was to write something that I would direct; it was as simple as that. As I was laying down the story and putting together what I liked—the setting, and references of where I was coming from—I knew that I was writing from a place of having lost parents. I knew the script was ultimately going to be angled toward that, and right around the time I was first starting the process, I saw two movies in the same week: LET THE RIGHT ONE IN and Bryan Bertino’s THE STRANGERS. Both of them, while horror movies, also struck me as distinctly human and distinctly sad; they’re both about the ineffable fact of loss that we’re all ultimately faced with. I was inspired by the tone of those films, which have a mournful quality to them. Even THE STRANGERS, which most people think of as a home-invasion movie, for me it’s about a life interrupted. With those as sort of touchstones in my system, I sat down to write the script, and was able to discover a story about a girl who essentially loses her parents, and then loses everything.

The original title, FEBRUARY, was meant to indicate my belief that a time can also be a location—that we can revisit a month just like people revisit negative anniversaries. That time of year stands out almost like a place; for me, to visit the month of September is as potent as visiting a cemetery. So from that quality of February being the “location” of the story, I derived that first title.

While the story came from a personal place, you chose to focus on female characters. What was behind that decision?

That’s a good question… I suppose I’ve always been most satisfied by movies like David Lynch’s, like ERASERHEAD, where everything is so deeply coded, and what you’re watching is actually representational of what is being said, you know? I don’t care for movies where they’re talking about what they’re talking about, where it’s exposition-driven and all about, these are the procedures we need to do. Those kinds of stories tend to leave me very cold; I don’t like reference, I prefer abstraction.

So in this case, I felt that in a way, I would get closer to myself by abstracting what I was doing. I would be more honest, almost, if I was doing it through a code. I felt that using a genre element would keep me more connected to the story, in a strange way, and having characters of the other gender was another way of getting at it abstractly. Maybe that’s counterintuitive, but it works for me, because I knew what I was doing; it wasn’t directly on the screen, but my intention was pure behind it all.

You got great performances from your actors, in the kinds of roles they don’t usually play.

Yeah, Emma Roberts especially is such a super-intelligent person, and a very sophisticated actress. She understood everything so well from the beginning, and really surprised me with her retention and her intention, and she was perfect all the time. Kiernan Shipka, whom people probably only knew from MAD MEN, had this unbelievable capacity for darkness, and an unbelievable capacity for sadness, and was able to clearly see everything I was describing to her. I don’t think I had to tell her to do anything, or what to do; I just had to tell her what was happening with Kat, what she was seeing, because so much of what’s going on with her is her own private, solo experience. I’d tell Kiernan what that was, and she had a masterful way of showing that in her eyes—which is, of course, the most important thing a film actor can do.

The casting of James Remar is also very effective; his presence alone suggests a creepy side that may or may not be there.

He really plunged deep into that, especially the scene in the hotel, where we don’t quite know what this guy is after. And James has a very sly sense of humor, which fit perfectly for the moment.

You make excellent use of the school location, and evoke a very strong feeling of spareness and stillness. Can you talk about that setting and your visual approach?

We were lucky to find an agricultural college outside of Ottawa, in Ontario in Canada, where there were buildings nobody was using. The student body had dwindled to 20 or 30 or something like that at the time, so there were ranges of empty space we were able to just inhabit. So we had sort of an à la carte deserted school, with that light you get in February in Canada. The cinematographer [Julie Kirkwood] and I found ourselves just turning off lights, and letting the natural light from the windows illuminate everything. It was authentically abandoned, so it was sort of camera-ready from the get-go.

The movie is, in a stealth kind of way, about a traditional horror subject, without it being the main focus. Can you talk about that side of the material?

I didn’t necessarily want to be distracting the audience with one hand while the other hand was doing something else, but there was that feeling of, can I situate the viewer in a possession story while I’m really creating a sad, mournful portrait of this girl? I wanted to use demonic possession as that kind of abstraction I was talking about before, where what I’m really talking about is loss and emptiness, but I can suggest that through the possession idea. Because people understand what that means; they understand that to be demonically possessed is essentially to lose yourself. It’s a loss of your life, and an alienation and a distancing from all that’s familiar. So I was able to use that almost as the disguise for a sad portrait of someone who’s just grieving from loss.