Releasing today on VOD and digital platforms from Shout! Studios, THE SOUL COLLECTOR (previously titled “8”) is a South African folk-horror film from writer/director Harold Hölscher. Set on a farm in 1977, it focuses on Mary (Keita Luna), a young girl living with her uncle William (Garth Breytenbach) and aunt Sarah (Inge Beckmann). She befriends Lazarus (Tshamano Sebe), an enigmatic man whom William invites to stay and work on the property, but he has a tragic past that has inextricably linked him to supernatural forces, which soon imperil the family. Below, we continue our interview with Hölscher that began here…

Hölscher was inspired by movies of the 1970s when it came to THE SOUL COLLECTOR’s atmosphere and mood, with lush and threatening cinematography by David Pienaar and an emphasis on character motivating the terrors. Crucial to the film is the relationship between Mary, whose curiosity leads her into potential harm’s way, and Lazarus, who in a way is just as much a victim as a villain—and thus the casting of those roles. While Hölscher went with familiar performers for a couple of key parts (Breytenbach and Chris April, who plays tribal elder Obara, both appeared in his previous short films), his two stars were new to his film world.

Sebe, an award-winning, three-decade veteran of South African TV, “also had a lot of theater experience in Germany,” the filmmaker says. “He’s very well-trained, but he’s never had that breakthrough role, so he was an elusive character. It was tricky for me to sort of see what he was capable of, because he’d never carried a feature film like mine. And then Garth one day said to me, ‘I met this guy on the set of BLACK SAILS,’ because they both had roles in that. I didn’t watch BLACK SAILS—I wasn’t able to get that—but I met Tshamano and said, ‘I need to get this guy on tape. Please, just let him be right,’ because his look is so endearing, which would create conflict in the viewer. So he did, and then I was like, ‘Thank goodness. You’re Lazarus, let’s go!’ He was quite a find.”​ 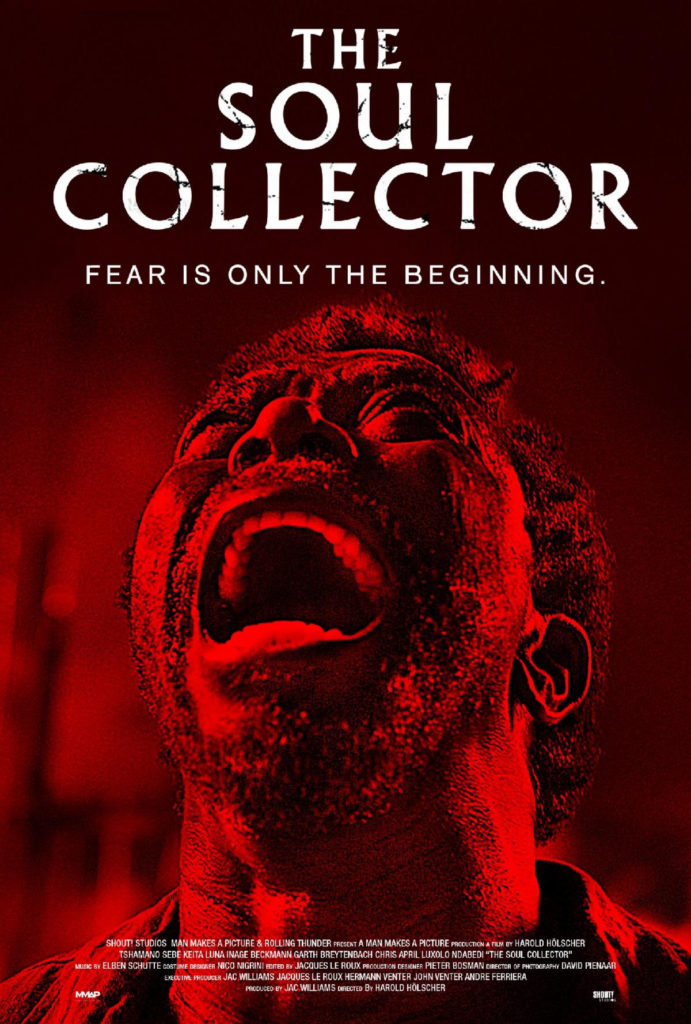 Luna, it turned out, was almost literally born to play the role of the nature-oriented Mary. “It was a boon for me, because Keita’s mom and dad are wildlife photographers and documentary filmmakers, so she already had this amazing knowledge. I had chosen these two little girls; it was going to be Keita or another one, and I remember the first time we went to the location and showed them around, just to meet them in person and see how they were. Keita was sitting there and saw this little frog, and she said, ‘This is a red frog of this species…’ and I was like, ‘What??’ [Laughs] She had special knowledge, and I just looked at her and knew she was the one. Those two actors made those two people come to life. I love watching them on screen; it’s like this complete and utter binary that falls together.”

The byplay between Lazarus and Mary also elevates THE SOUL COLLECTOR above the troublesome potential of a scenario involving a black character threatening a white family. Still, any film with that kind of dynamic risks being misread on a sociopolitical level in our current times, and Hölscher confirms that that possibility was definitely on his mind. “I spoke a great deal with someone who’s South African and now living in the States, and he asked the same thing: ‘Are you quite wary of that?’ And I am, very much so. But I think that at its core, it’s a pure film and has nothing to do with that. You know, viewers can push their own agenda on some films; they can make their own political readings. It’s in the eye of the beholder, really. Unfortunately, South Africa is rife with crime, but my intention with this film was to unite and not to segregate. I would just like the audience to sit and watch a really frightening flick, and be scared together, you know? So that was something I thought about the whole time, but I had to put that all aside and be courageous, and see what people will make of it.”

Hölscher hopes that as THE SOUL COLLECTOR finds its way to a wider American audience after its international festival play (including a world premiere at last year’s Fantasia International Film Festival, where this interview took place), it will help generate more awareness and thus more production of fright fare in his country. “There have not been a lot of horror films in South Africa, and in fact, producers and distributors there were very fearful of backing this movie. There was one that did quite well two years ago, an Afrikaans horror film called SIEMBAMBA that was retitled THE LULLABY when it went to the States, but it was pulled after two weeks in South Africa.

“It’s a struggle there, because movie tickets are expensive, and with the movement from cinemas to TV and Netflix and stuff, across the world it’s becoming quite tricky for cinemas. Obviously, if there’s a Marvel movie and a South African film playing, you have to compete against that, right? There’s no two ways about it, so the only reason you’d watch that movie over the bigger one is because you’re proud, and you want to see something South African. I believe that’s what the new wave of filmmakers want to do; we want to make the South African audience proud, and show the world that our country is such a rich location for characters and actors.”

The irony is that any number of genre productions originating outside South Africa—from MAD MAX: FURY ROAD to CRITTERS ATTACK!—have shot in the country, particularly Cape Town, for financial and practical reasons. “What’s good about South Africa is that our crews are phenomenal,” Hölscher says. “They’re really world-class—but also, we don’t have the unions that the States have, which is not a good thing at all. I know that when MAD MAX: FURY ROAD filmed in Namibia, with both Australians and South Africans working on it, it was quite a big difference between the union-based crew and the non-union-based crew, how they were treated. I and my team want to build bridges, and start trying to marry the financing and experience you can get from the States with our industry.”

And when that happens, he has a number of projects he’d like to jump into. “The question for me is which to do next, because it’s like, I have all these horses in the race, and which one do I bet on? I’ve got a beautiful film that I’ve been presenting to people; it’s also an African horror story of the supernatural, and it’s more like PAN’S LABYRINTH. It’s called UMUTHI, which means ‘tree,’ and it further unpacks more of the things I touched on in THE SOUL COLLECTOR, like animism and family values and slavery at the turn of the century, all set against the backdrop of the story of the Little Wasp and the Sycamore Fig Tree, the ancient story of self-sacrifice. Also, I’ve been presented a script that I’m looking at that’s an African HANSEL AND GRETEL from the witch’s point of view. What’s lovely about platforms like [Fantasia] is to see, as a first-time filmmaker, how other filmmakers have been able to make their own films and still be successful in the system. I’m a big strategist, so I really want to try and strategize my career from now on.”