Currently making its way around the festival circuit, the short horror film LATCHED is winning quite a lot of attention for directors Justin Harding and Rob Brunner. The duo discuss the creation of this frightening family affair and the feature they plan to follow it with in this exclusive chat.

LATCHED, which has played the Toronto International Film Festival and Fantastic Fest and next heads to Sitges, stars Harding’s wife Alana Elmer and their little son Bowen Harding as a mother and child staying in an island cottage during the off season. Their only neighbor is a strange old man (Peter Higginson), and things turn scary for them after they discover the remains of what looks like a bat, but turns out to be something very different. LATCHED marks the latest in a growing horror résumé for Harding and Brunner, who have a background in reality TV shows ike THE AMAZING RACE CANADA and WILD THINGS WITH DOMINIC MONAGHAN. Next up: a full-length chiller called MAKING MONSTERS.

What was the initial inspiration behind the short?

HARDING: I follow various creepy pages on Facebook for inspiration, such as “Hair-raising videos 18+”, which posted a video of a mummified fairy corpse supposedly found in Mexico. It was was fascinating, and looked completely authentic with tiny claws, teeth and wings. In the video, they had scientists studying the corpse and taking tissue samples. It was such an interesting tiny monster that was obviously created as a hoax, but it was the spark of inspiration that brought the whole concept of LATCHED together. I remember thinking, “What would you do if you actually found something like that?” The working title before LATCHED was ZOMBIE FAIRY FROM SPACE.

How did your reality-TV backgrounds play into how you approached this movie?

BRUNNER: That experience is quite useful when approaching narrative films, because we’re very comfortable on large sets under extreme pressure and have been able to build up a network of friends and collaborators who are true professionals; our sound man, Luke Mclean, also worked on IT, for example). Creatively, however, narrative moviemaking is a completely different beast that requires an almost opposite approach, which we find quite refreshing. On THE AMAZING RACE, shots are improvised in the moment and camera teams are racing to simply capture the action. In film, every single shot is carefully preplanned and designed for very specific sequences, so it’s nice to flex a different muscle. 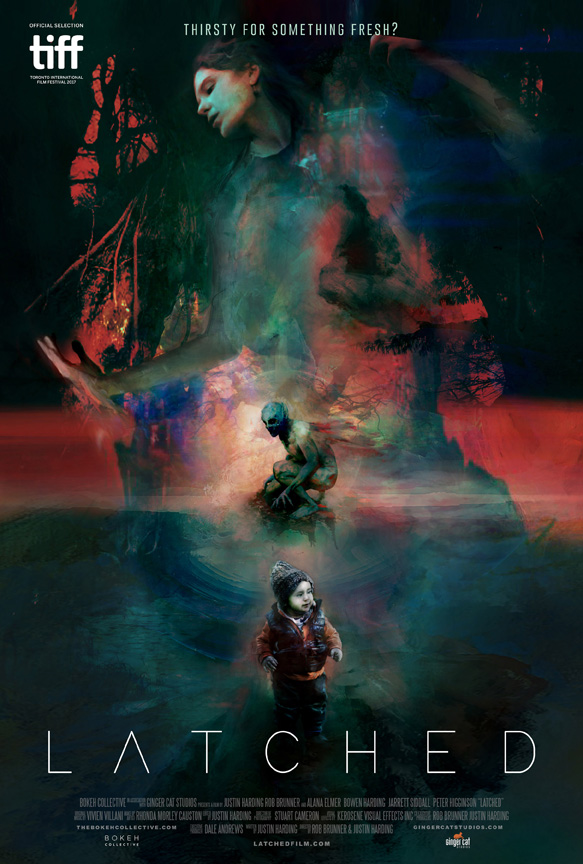 Justin, how did your real life and family play into the conception of LATCHED?

HARDING: My wife, Alana Elmer, has worked as a professional dancer for over 12 years with the Toronto Dance Theatre, so I was interested in creating something terrifying using her unique dance experience. I love Darren Aronofsky’s BLACK SWAN and wanted to create a monster film that somehow incorporated dance. Alana and I have made crazy shorts and dance films together since 2001, and in 2016, we made a short called KOOKIE that did very well in festivals and screened as part of the midnight shorts block at SXSW, so we were inspired to create something fresh.

After we had our son Bowen, it was obvious that we should create a maternal horror film with Bowen as one of the main characters, because as a family, we can push the boundaries of the story to a very interesting place you couldn’t get to with hired actors. When Rob and I were discussing what the device should be that reanimates the corpse, it was actually Alana who suggested breast milk as a joke, and after Rob and I laughed out loud, we quickly realized how brilliant an idea that actually was, so the entire film shifted in a much more interesting direction.

How was the experience of working with your wife and son?

HARDING: Working with Alana is always fun, because as a dancer, she has been conditioned to perform completely uninhibited, and is willing to do almost anything in the name of art. There may have been a few moments, however, where we pushed her a little too far, because at around 6:30 one morning, after filming all night and racing to finish before sunrise, Alana, who was completely delirious, threw a flashlight at me and screamed, “If I don’t win an award for this, we’re getting a divorce!” We laugh pretty hard about that now.

Bowen was only 14 months old when we shot LATCHED, and I assumed working with a toddler would be our biggest challenge, but Rob and I were pleasantly surprised that capturing his performance proved to be the easiest part of the shoot. Bowen was always happy, so we got all his happy moments first, then simply waited until he got fussy to capture a few seconds of crying before moving on. We filmed LATCHED over the course of two weekends at our family cottage, which is also where we spend most of our free time, so the environment was quite comfortable for us. That made the whole experience fun, and not too out-of-the-ordinary for Bowen. We used a collection of squeaky toys and rattlers to get him to look around or perform a certain way. The behind-the-scenes footage of us trying to direct him is hilarious.

How was the monster brought to life?

BRUNNER: It was performed by Jarrett Siddall, a great friend of ours and a dance colleague of Alana’s. Jarrett and Alana have have a great creative shorthand. Every time we set out to make a scary film, Jarrett is always cast as the monster because of his unrelenting commitment to filmmaking, his passion for creating creatures and his amazing physicality.

HARDING: Jarrett’s involvement is actually quite extensive, because he collaborates with Rob and I throughout every stage of production; he also served as LATCHED’s production designer and built the creature’s nest in the woods. We hired Rhonda Morley Causton to design the creature prosthetics and the tiny fairy corpse; her portfolio showcased an obvious talent for creating aliens monsters and other fantastic creatures, and her studio was located near our shooting location, which was ideal. In discussions with Rhonda, we decided to try to make everything as authentic as possible without cutting corners, so most of our budget went into the creature design. Using a cast of Jarrett’s body parts, Rhonda sculpted the creature’s entire head and built full-sized practical wings, along with a chest prosthetic. The final touch was a pair of blacked-out contact lenses that covered Jarrett’s entire eyeballs. All the makeup was applied in a neighbor’s cottage in about 14 hours, which was grueling for Jarrett, because he couldn’t sit down and could only consume protein shakes. We filmed in late November, so it was bitter cold in the forest, and between takes, Jarrett had to run to a makeshift “heat tent” to keep from freezing.

The creature looked great, but we realized that if the wings moved more, the creature could have another layer of expression, so we decided to digitally remove most of the practical wings in post and replace them with the same ones, but puppeteered them against a greenscreen in our office to be more expressive. Rob and I did the puppeteering ourselves and worked with Kerosene Visual Effects in Toronto, who digitally removed the old wings and replaced them with our new, more expressive ones. They did an amazing job, and with a little color correction and some sound effects, the creature came to life on screen quite nicely.

What can you tell us about MAKING MONSTERS, the feature you’re working on?

HARDING: It focuses on a YouTube streamer who makes a living prank-scaring his girlfriend on-line. When they go on a vacation to a friend’s converted church in the countryside, a series of mysterious events unfold that spiral them into an unexpected nightmare. Our plan is to shoot the entire film in 10 days and edit as we shoot, so on day 11, our entire team can sit down and watch an RC of the film. MAKING MONSTERS will have the same DNA as LATCHED: high production value with genuine scares, but also quite funny and highly entertaining. There are only three main characters, and we plan to shoot the movie on a microbudget of only $50,000 while filming an extensive behind-the-scenes web series sponsored by White’s International documenting the entire filmmaking process.

BRUNNER: We know our limitations and our capabilities, so we understand the challenges with such an aggressive schedule and low budget, but we’re approaching it as an experiment in efficiency. Can we pull it off and make it work? Creative solutions to low-budget filmmaking challenges will be the focus of the web series, while the goal for MAKING MONSTERS is to create a fresh voice in horror that pushes the genre forward with style. We are set to shoot next February in Meaford, Ontario.

How do you divide creative duties on your projects?

HARDING: It depends on the project, because we also show-run TV and direct commercials, but generally we share many of the same skills, so we don’t often divide duties. Sometimes we will split units to move faster, but usually we operate as a duo. Co-directing wouldn’t work for many filmmakers, but with us it’s all about the preparation.

BRUNNER: The key is storyboarding every scene together, so we’re both contributing to the shot design. Justin and I will spend a long time designing 3D animatics in a storyboard program called FrameForge Storyboard Studio, which is an amazing tool for filmmakers. We then take those storyboards into Final Cut Pro X to edit the animatic version of the film so we both completely understand each and every shot we need to tell the story.

HARDING: When we collaborate on the storyboards in preproduction, we step on set with the shared confidence of knowing exactly what’s needed, so then we simply execute our plan as a team while consulting with each other over performance decisions. There are always going to be some creative differences between co-directors, but since we share similar skills and trust each other, it works for us.