At a time when so many movies fall into predictable formulas, thank goodness for one as bugnuts crazy as THE PERFECTION, debuting today on Netflix. RUE MORGUE spoke with its director/co-writer Richard Shepard about fashioning this one-of-a-kind insane experience.

The less you know in advance about the plot of THE PERFECTION, which Shepard (whose previous features include THE MATADOR and OXYGEN) scripted with SUPERNATURAL writer/producers Eric Charmelo and Nicole Snyder, the better. All that should be revealed is that it begins with Charlotte (GET OUT’s Allison Williams), a cello prodigy who gave up the instrument in her teens to take care of her sick mother, returning to the field as a judge for a competition in China. There, her former teacher Anton (Steven Weber) introduces Charlotte to his new star pupil Lizzie (Logan Browning), and the two women become fast friends. Then things start to get nuts, as the movie pulls a series of twists and reversals that’ll have you wondering just what strange and deranged territory it’ll enter next. As it turns out, the Asian setting of the opening act is appropriate, given some of Shepard’s key influences…

Can you talk about the writing of the script, and making it so unpredictable?

I’m a big fan of Korean cinema, especially the films of Park Chan-wook like OLDBOY and THE HANDMAIDEN. I love the way he tells stories, in which there are huge, huge plot shifts that seem insane at the time, but somehow all make sense by the end of the movie. I felt that sort of approach had not been done in American films. We have plot twists, of course—almost every movie does—but not these gigantic, seismic shifts where you’re like, “How does this even relate? And then when it does, you’re like, “Oh wow, that’s really cool.” That was something, from the very beginning, that Eric and Nicole and I wanted to do.

And then we wanted to create indelible characters who would take audiences on that journey, because if there weren’t people in the movie you could be interested in, all those twists and turns would just be for effect, and it wouldn’t work. And as we started writing it and got deeper and deeper into the story, it got more and more insane, and we were like, “Wow, this is really fun. We haven’t seen anything quite like this.” 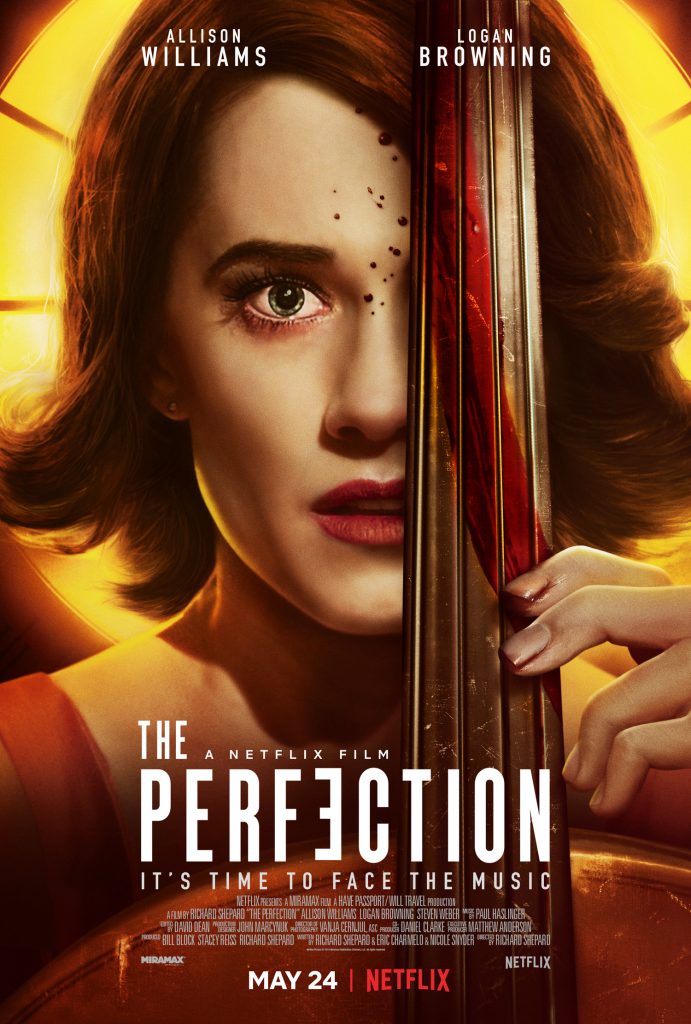 Did you start with an outline, so you knew where you were going, or did you just plunge in and see where the story took you?

A lot of my past films I’ve written without an outline, but this was definitely a project where we had one, because it was so complicated that if we didn’t have an outline, we would have been stuck. We started coming up with character stuff and backstory, and weirdly, it wasn’t as hard to write as you might imagine. It just sort of flowed out of us, and we wrote it rather quickly, because it was all just making sense.

There’s a point at which THE PERFECTION seems like it’s going to be one kind of horror movie, and then it becomes another entirely. Can you talk about pulling off that kind of bait-and-switch?

Well, that is the movie, in a way. The movie is a journey, not a destination. Getting audiences to feel like it’s one thing and turning a different way is why it works, and feels original and fresh. It doesn’t feel canned, or like every other movie out there, and that’s why I hope it’s going to have a life out there.

Did you work with Netflix to ensure that as little as possible about THE PERFECTION was revealed in the marketing before it started airing?

Hugely. One of the reasons I was excited that Netflix bought the movie was that I knew they would be able to cut a trailer that didn’t have to give away every plot turn to get people to watch it, because all people have to do with Netflix is just click on it. With a movie that’s in theaters, you have to create a trailer that reveals enough of the story that people will want to spend $15 on it. But with Netflix, I thought we could cut a shorter trailer; it’s only about a minute and 15 seconds instead of two and a half minutes. We could give away a little bit, enough to get people interested, but we wouldn’t give up the farm, as they say. Hopefully it’s enough to encourage people to say, “What is that movie? It looks completely bonkers.” And when they watch the movie, they’ll see that it is bonkers, but hopefully they’ll also think it’s even more—that it’s dramatic and suspenseful and romantic, and about something, and has a lot of great acting, and is different from everything else you’ve seen.

What inspired the decision to set the story in the world of classical music?

We wanted to create an environment where Charlotte and Lizzie come from that is one of beauty, of elegance, because the movie then goes down a road very, very far away from this rarefied world. Plus, music and movies were made for each other, and I knew that by having music as part of the plot, we could come up with some cool, cinematic sequences using that music, and have fun with it.

Was that also the motivation behind setting the opening scenes in China—opening in an exotic location before the story goes to its darker places?

Yeah. If you really think about this movie, it has several chapters, and we wanted each one to have a different feeling, so you’re like, “Wait, where are we now?” Setting a movie in another country always adds a level of interest, where it’s foreign in every possible way. I loved going from the world of China to the next chapter, where you’re like, “How are we even here now?” That gives the movie energy and complexity. Also, the idea of being in trouble in a place where you don’t speak the language can be scary. Anyone who’s traveled knows that even just trying to find a restaurant when you don’t speak the language is tough, let alone if you’re sick on a bus and trying to find help. That seems like it would be terrifying.

Was there any concern from the producers or financiers about the movie’s violent or sexual content, and how far you were going to push that?

I think we ride a very thin line with this movie, and we do it correctly. That’s because I had a lot of very smart people around me, starting with Allison Williams and Logan Browning, who are very savvy women. My producer, Stacey Reiss, my co-writer, Nicole Snyder—there were a lot of people around me making sure that we were doing the movie we wanted to do, but we were not tipping too far into territory that was offensive. I mean, people will watch this movie and take from it what they want, and bring to it what they will, and some people will like it and some people will not. But the fact is that we felt like we were always being true to the characters, and that we weren’t too violent or too sexual. There are certainly movies more violent than ours, and certainly movies more sexual than ours.

How was the experience of watching the movie at its Fantastic Fest premiere, with an audience who didn’t know what they were getting into?

You can’t ever reproduce that, the first time you see a movie in front of people—especially at Fantastic Fest, where the audiences are really keyed up and love these types of movies. It was one of the thrills of my life. Allison and Logan were there, and we got to enjoy the film through the audience’s wild enthusiasm. There was no marketing whatsoever, and no one knew what the story was; it was completely fresh, and that’s a rare thing.

When it comes to the backstory between Anton and the girls, and what happens between them later in the movie, were you trying to tie in with current events and concerns?

We were all very influenced by this documentary series called THE KEEPERS, which is about abuse in the Church and the cover-up there. That was the show that motivated us the most, and then obviously, as we started shooting the movie, a lot of the issues we deal with in it started coming to light. The Harvey Weinstein and Larry Nassar scandals—there were a number of those things that were in the zeitgeist. But the fact is that THE PERFECTION started with the idea of a girl who leaves her music academy as a child while this other girl is entering, and she leaves knowing what dark things are about to happen to that girl, and doesn’t stop her. She doesn’t say, “Don’t go up those stairs.” She lives with that guilt and pain for 10 years, before the movie’s story starts. That was the story we always wanted to tell, and all the other stuff that’s happening in the world right now, and what’s going on with Time’s Up and all of that—that’s just a byproduct of making art.

What’s up next for you? Are you going to do another movie as outrageous as THE PERFECTION?

Well, I don’t think I’m going to try to top this; there are a lot of other stories I want to tell. I just directed a television pilot for NBC, which is going to be a show in January, called ZOE’S EXTRAORDINARY PLAYLIST. It’s actually a musical—so, from THE PERFECTION to a family musical! That’s what I like about my career: I get to do so many different things, and I feel very lucky. I am writing a new feature script, and hopefully we’ll be making the movie sooner rather than later; it’s always difficult to get a movie made, but I’ll keep trying.