Exclusive Interview: Director Randall Okita explains his vision behind “SEE FOR ME”

Sophie Scott, the blind heroine of SEE FOR ME (now in theaters and on VOD/digital from IFC Midnight), is played by Skyler Davenport, who is visually impaired in real life–and director Randall Okita wouldn’t have had it any other way. He aimed to bring character authenticity to the tension of the movie’s night-of-survival scenario, and discusses how he delivered both in this interview.

Okita, who has a background in both feature and short filmmaking as well as virtual reality experiences, has gotten the 2022 movie year off to a suspenseful start with SEE FOR ME. Scripted by Adam Yorke and Tommy Gushue, the film places the sightless Sophie in a large, isolated house where she has taken a cat-sitting job. Before long, three men arrive, anxious to get their hands on something in the house’s safe, plunging Sophie into a fight for her life in an unfamiliar environment; she’s helped from a distance by former soldier Kelly (Jessica Parker Kennedy) via a See For Me app on Sophie’s smartphone. The movie (reviewed here) spins this situation into some surprising directions, especially as regards Sophie’s character, who has some unexpected edges yet commands sympathy throughout, thanks to the performance by Davenport (interviewed here).

How did you first come to be involved with SEE FOR ME?

I was lucky enough to be sent the script and to start having conversations about it. I was so pleasantly surprised and enamored of the story from the first read, because it was a very tight, suspensefully woven piece. There were lots of great twists and turns, and plenty of that great satisfaction of the genre, but on top of that, there were the nuances and a couple of original twists and turns, and part of that was connected to this imperfect character of Sophie that I really fell in love with. It included these layers of vulnerability and independence and teamwork and rebelliousness that spoke to a sense of representation we don’t always see. To be able to do that, and also deliver an incredibly fun thrill ride, made it an ideal project for me. 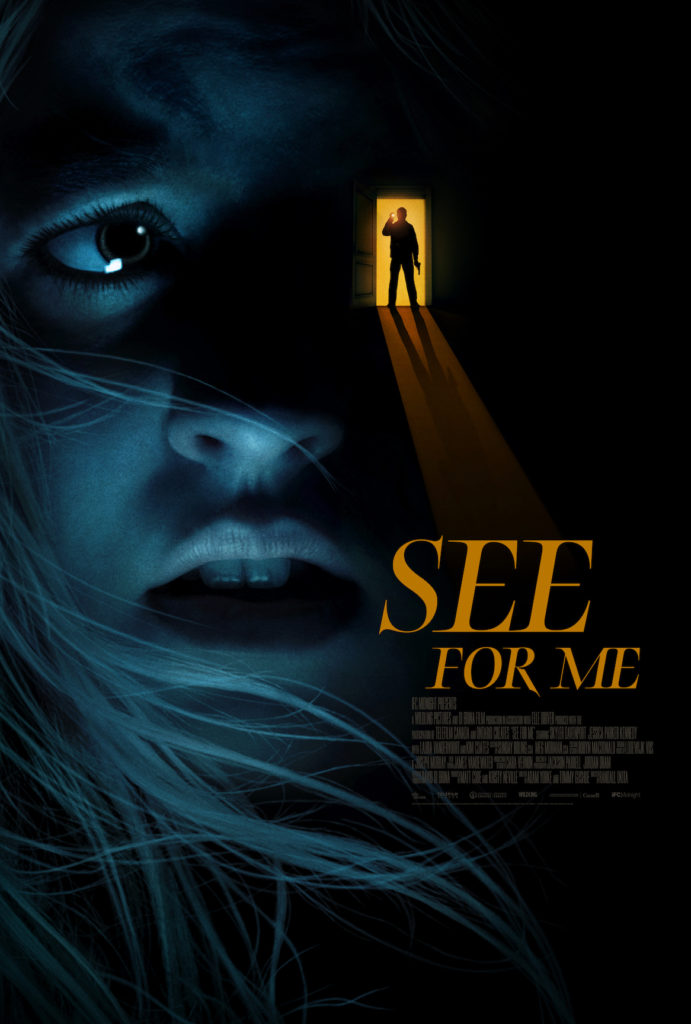 Skyler Davenport told us it was a four-year process casting Sophie. Was it in fact that long?

It was a lengthy process, but I think that was also part of the development phase. While the script was in development, I believe people were looking and hoping to find that sort of magical choice. Luckily, it all came together when we met Skyler.

Was there ever a thought of casting a sighted actress, or were you always seeking someone non-sighted for the role?

There were a lot of conversations, and that was a big one. For me personally, that was never part of the discussion, because I believed we could find somebody with that lived-in experience. That was very important for me. It was also important to the producers and our collaborators, and there can be smaller pools sometimes of experienced performers for different roles, so it can take extra time. But that’s also part of the fun and the responsibility and the workflow that we need to build into those kinds of questions. I certainly hope that SEE FOR ME shows people how wonderful those results can be. Collaborating with Skyler and talking about the incredible and complicated and challenging life experiences they have had–dealing with vision loss and experiencing the world in new and different ways, and interacting with people who may or may not understand what that looks like and feels like–to have that layered into the film makes it richer and more authentic in some ways, makes it more entertaining, makes it more suspenseful. It’s still a fun genre piece that delivers a great adventure, and it wasn’t just about getting that right, but about getting it right as part of a bigger story.

We had so many conversations that I felt were useful and rich, talking to Skyler about the way Sophie would move through the world, at different moments of visibility and visual ability, and also how we would represent what Sophie was carrying and what she was experiencing. Those conversations affected the way we shot, from Sophie’s perspective and her in these different environments.

I found Sophie’s darker, less innocent side very intriguing. Was that all there already in the script, or did you add elements to emphasize that when you came on board?

It was there, for sure, but there were many conversations, because when you get into the nuances of likability, it’s a matter of how bad is bad-ass and how bad is not likable. There were many discussions about the ending, and where exactly that final piece lands. It was very interesting, because it’s hard to see how it’s going to land with an audience until it’s done, until you see all of those different levels and flavors and intensities cut together. But that, to me, was a fun part of the conversation, because it’s what makes Sophie human and relatable, and that’s an important part of representing a complex character with layers of ability and representation–that some people are good, and some people are vulnerable, and people react to different situations in different ways. I loved that it was in the script to begin with, and it allowed us to have those discussions and get very specific about those moments. And Skyler brought so much, both as a performer and as somebody with this rich experience of having those vulnerable moments as a result of those conditions.

How did you find that expansive, perfect house location, and was everything you needed there, or did you have to add to it or build sets?

We looked high and low. We referred to the house as another cast member, and we really did search all over, to try to find a place that fit the feeling and tone and complexity of the script. So it was a long process, but when we came across that house, we saw that it was the place right away. It had this combination of warm, wooden layers and unique shapes and long, winding areas, with this cold glass–these layers that felt inviting and scary at the same time. It was definitely a one-of-a-kind house that was lovingly designed and had all these nooks and crannies and places to hide, so that was helpful. We added a little bit; there wasn’t a safe, for example. Our incredible production designer Ciara Vernon helped transform the place into what you see in the film, which was no small task, especially with a house as big as that was, and then adding in those layers and the safe and those secret compartments that come to life in the film.

I enjoyed the fact that we first see Kelly playing first-person shooter games, and then she guides Sophie through a kind of real-life first-person-shooter scenario.

It’s such a testament to Skyler’s performance that when we were shooting [the scenes where Sophie talks to Kelly], we were running around this house at night, and Skyler was performing against terrible reads [of Kelly’s lines]; some of them were me, some of them were our AD. We were not the actors that Skyler deserved, but they did such a great job of staying in the moment and hearing Kelly’s voice. And then of course, Jessica came in and did such a great job as Kelly, and I loved seeing their relationship develop in the film. It’s so wonderful to see how it came together despite that distance, which obviously is a metaphor for many parts of making the film. For the writers, that was part of the initial spark and idea from the genesis of the project. That’s a real game you see in those early scenes, and it was such a fun part of layering in the visuals, and building that in without overdoing it–without it literally becoming a video game–and also referencing the way somebody would think, being behind that screen.