J.J. Perry has one of the most impressive stunt résumés in the business. Since his start back in the late ’80s, he has performed and coordinated action and fights on over 150 features, including the JOHN WICK and FAST AND THE FURIOUS franchises, and directed 2nd unit on numerous action epics as well. Now he has made his debut at the helm with DAY SHIFT, premiering on Netflix today.

As opposed to the real-world mayhem of most of his previous films, DAY SHIFT (scripted by Tyler Tice and ARMY OF THE DEAD’s Shay Hatten) finds Perry diving into the world of the supernatural. Jamie Foxx stars as Bud Jablonski, who apparently works as a Los Angeles pool cleaner but is actually a vampire hunter–albeit one who has been booted out of LA’s underground slayer’s union. When circumstances require him to get a lot of cash fast, he convinces his former boss to take him back on, with the requirement that he be accompanied by desk jockey Seth (Dave Franco). Together, the two face numerous species of suckers in dynamically staged, acrobatic combat scenes. Co-starring Meagan Good as Bud’s ex-wife, Karla Souza as the vampires’ leader, Snoop Dogg as Bud’s mentor Big John Elliott and cult action favorite Scott Adkins as one of the bad-ass Nazarian Brothers, DAY SHIFT counts JOHN WICK co-creator Chad Stahelski as one of its producers.

Was DAY SHIFT the first feature you were offered to direct?

Well, after doing JOHN WICK 2, I was getting a lot of scripts, and because I was in the Army and had 168 amateur fights, there were a lot of “PTSD soldier” or “kickboxer dude” or “Let’s do another JOHN WICK.” I was reading them and thinking, “Aaahhhh…” Now, I go back to BIG TROUBLE IN LITTLE CHINA, THE LOST BOYS, THE EVIL DEAD, FRIGHT NIGHT, from the mid-’80s when I grew up. Those were the movies I loved, because they were action/horror/comedy, they had those three ingredients where you can always have the upper hand on the audience, and control their jumping, and then they’re like, “Oooooohhhh” and then they’re laughing. So when I read DAY SHIFT, I knew right away that this was the one. Unlike JOHN WICK, which has one world that hides in plain sight, we have two: We have the vampire hunters’ union, and we have the vampires. It spoke to me immediately, and I absolutely knew I had to do it, and I’m super-grateful that it happened. 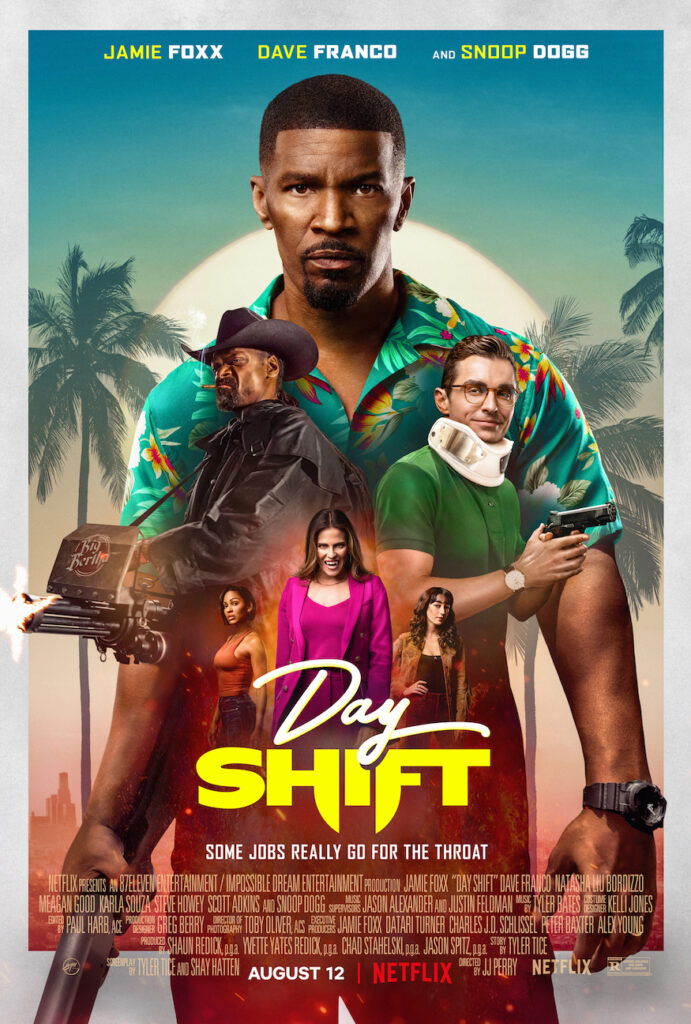 Did you do any work on the script, or supervise any rewrites on it?

After Shaun Redick and Yvette Yates from Impossible Dream Entertainment brought it to me, me and Tyler Tice, who wrote it, worked on it for about a year together. When I got it, it was a much smaller movie; I just put giant action teeth in it, coming from my 2nd-unit background, and also made the characters a little more familiar to me, as a first-time director. I wanted to be able to speak intelligently to the actors, so–Bud has a 9-year-old daughter? I have a 9-year-old daughter. My wife is an attorney, so she’s the King Kong of arguers; Meagan Good’s character is the King Kong of arguers. Snoop Dogg reminds me a lot of my platoon sergeant I was in the Army with, who was a big mentor to me. And Dave Franco’s character is strangely like all the young stunt performers I go on the road year-round with, to do this dangerous stuff. They’re all Gen-Z and millennials, and I’m Gen-X; I don’t know what the fuck they’re talking about all the time, but I love ’em! That was the dynamic I wanted to capture between Jamie and Dave–that weird thing that happens with us on the road where I’m like, [laughs] “Was that funny? I don’t know if that was funny or not, but I’m just gonna laugh because I don’t want to feel uncomfortable.”

I also shot and cut a previs for the first fight with the old lady, I did a vampire genogram, and a look book and two sizzle reels. Then I was in London doing F9: THE FAST SAGA, Chad Stahelski was there promoting JOHN WICK 3, we were out with him and Keanu Reeves having a couple of drinks and he said, “Hey, man, do you have anything? I think Netflix is going to give me a first-look deal.” And I said, “Funny you should ask!” About three weeks later we were at Netflix, getting it up and running.

What did Shay Hatten contribute to the script?

After Netflix greenlighted it, they had a few notes, and Shay came in and we gave it a good polish. Shay’s another guy I’m a big fan of; we had a great time working on it together.

DAY SHIFT is more fantastical than most of the films on your résumé. How did that influence your staging of the action?

When you’re doing something like a JOHN WICK movie, it’s extreme but it’s bound by reality, because he’s a human being. You’re bound by gravity. The minute you bring vampires into the fold, you have license to go over the top even more, to defy gravity a little bit, to defy human physics with loose spines and necks. And the thing is, I don’t watch action movies, because I don’t want to be influenced. You can’t watch something and not be influenced by it, so I just don’t watch ’em, because I don’t want somebody else’s stuff showing up in my movie. But I watch horror and comedy because I enjoy them, and I admire the direction. Horror movies require strong direction to keep the audience tense and to release that tension, and that goes for comedy as well. And my favorite movies, the ones I mentioned before–they didn’t have digital effects back then. They were doing it in-camera, and we did DAY SHIFT in-camera as well. 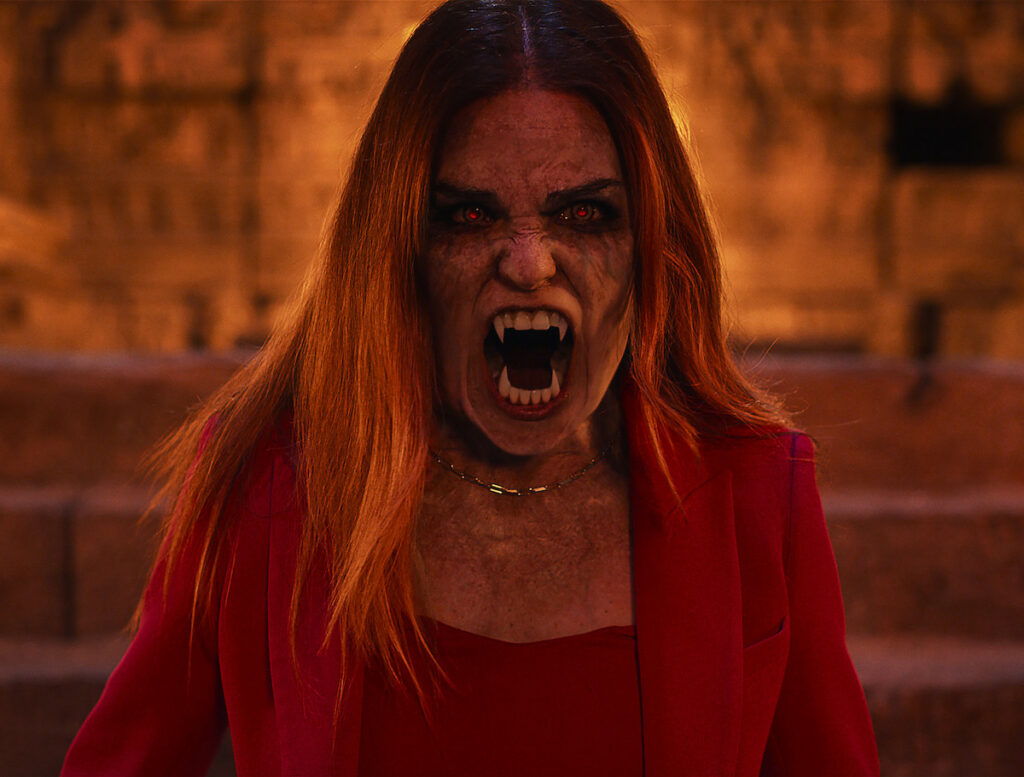 How did you aim to make your vampires distinctive?

I did that vampire genogram. And since we shot the movie in 42 days–it was done very quickly, and there was no 2nd unit–I knew we weren’t going to have a lot of money to do big VFX transformations, and I wasn’t going to have enough time to put a lot of it into the vampire makeup. I knew that was going to be good, but I wasn’t going to have six hours to make someone up. So I was relying on their movement, and that’s why I went to Vegas and got some of the top contortionist performers from the live shows. They’re not just normal contortionists; they’re like triple-jointed, and because they perform live on stage, they’re very expressive.

The old lady, for example, had four performers. There was an actress who played the character, there was a stunt double we used to ratchet into the walls, there was a fight double who did all the hand-to-hand fighting and there was a contortionist double for all that work. Now, the contortion stuff was shot in reverse: We put them in their second position, and at a magical frame rate that I would happily sell to the highest bidder, pulled them out of that, and feathered it in in post.

Everything was done in camera. Listen, I learned this craft in the ’90s, and back then you couldn’t say, “We’ll fix it in post.” And I think a lot of the art of action filmmaking is being lost right now, unfortunately. I’m not knocking digital effects, I think they’re great, but I still want to crash real cars and do everything as real as I can. And when I can’t, then I ask my visual effects brothers and sisters to help out.

Your car chase is pretty spectacular; I assume a lot of the follow shots were done with drones?

I had a Russian Arm, I had an e-bike, I had a drone; I used every tool in the arsenal. After doing a couple of FAST AND FURIOUS movies, the only way to fake speed is to go fast and furious, not slow and curious, brother! So we got out there and shredded it at 80 miles an hour, dropped down into culverts because I love TERMINATOR 2. There are a lot of homages to THE EVIL DEAD, T2, THE LOST BOYS, all the movies I loved when I was a kid. Even ARMOR OF GOD, the Jackie Chan film that’s one of my favorites, when they’re at the house with the Nazarian Brothers.

Speaking of the Nazarians, was Scott Adkins someone you wanted to get into DAY SHIFT from the beginning?

He’s a bro I go back with to UNDISPUTED II, THE TOURNAMENT, THE SHEPHERD, X-MEN ORIGINS: WOLVERINE…we go way back together. We’ve been friends forever, and I don’t know that I would do another movie without casting Scott Adkins. He’s hilarious, he just hadn’t had the opportunity to do comedy before. He’s also in JOHN WICK 4, and I just saw that the other day and he’s amazing in it, so this should be a good breakout year for him.

How did Jamie Foxx take to all the stunts and fighting he had to perform?

So, Jamie’s my age; we were both born in 1967, and he’s from north of where I’m from in Texas, and we kind of grew up in that same time. He was a quarterback, he’s an amazing athlete, and he took to the action like a pig takes to shit, brother; he just jumped on it. There were only maybe one or two hard hits that we didn’t use him for. He wanted to do them, and I was just like, “I can’t have you limping around, bro; let the kid make a few bucks too!” He did everything, and so did Dave Franco, and so did Snoop; all the cast trained, and we had boot camp, like on all the movies I’ve done–we had a boot camp for Keanu Reeves on JOHN WICK, for Tom Hardy when we did WARRIOR. They learn how to fight, how to handle weapons, reloading, correcting malfunctions, etc. The best way to fake making someone a bad-ass is just, make them a bad-ass, you know? Give them the opportunity. And all the cast on our film crushed it.