After many years and many filmmakers attached, the reboot of HELLRAISER finally emerged on Friday as a Hulu exclusive, directed by David Bruckner and scripted by Ben Collins and Luke Piotrowski, the team behind the acclaimed THE NIGHT HOUSE. RUE MORGUE got some time with Bruckner to discuss his vision for remimagining the Clive Barker classic.

In the new movie, the puzzlebox that summons the Cenobites falls into the hands of Riley McKendry (Odessa A’Zion), a young woman struggling to break the bonds of alcohol and drug addiction. When the unearthly beings claim her brother Matt (Brandon Flynn), Riley attempts to unlock the secrets of the box to rescue him, putting herself and her friends in terrible danger. Jamie Clayton also stars as a female variation on the Pinhead character, here billed as “The Priest” and surrounded by a largely fresh crew of Cenobites.

A reboot of HELLRAISER has been in the works for quite some time; at what point was it offered to you, and when did you officially come aboard?

I think this particular version began sometime in mid-2019. David Goyer had written a treatment, and he and Keith Levine brought on Luke Piotrowski and Ben Collins to write the first draft. I was still finishing THE NIGHT HOUSE, and I knew they were working on it and said, “Don’t even talk to me about this [laughs], unless we’re really going to talk about it,” because I didn’t want to let it into my heart. It was actually around April 2020 when they finally shared the script with me, and I was elated to find that there was a story that I could get behind–that I felt was HELLRAISER, but also had the guts to do something new.

Were you a longtime fan of the HELLRAISER films?

Oh, yeah; I discovered HELLRAISER in the ’90s, as a teenager, and HELLRAISER III was the first one to find me, strangely. I developed an incredible regard for the first film, which I think is a complete masterpiece, and I had read [Barker’s source novella] THE HELLBOUND HEART many years back, and there’s nothing like HELLRAISER. Someone described it as “graduate-level horror,” and it felt like this amazing secret, because it’s so well-regarded by the fans, but there are so many people outside of it who don’t understand it, necessarily, so the people who can really dig into it embrace it and evangelize it in a powerful way. So yeah, I’ve always been an extreme fan of the series. 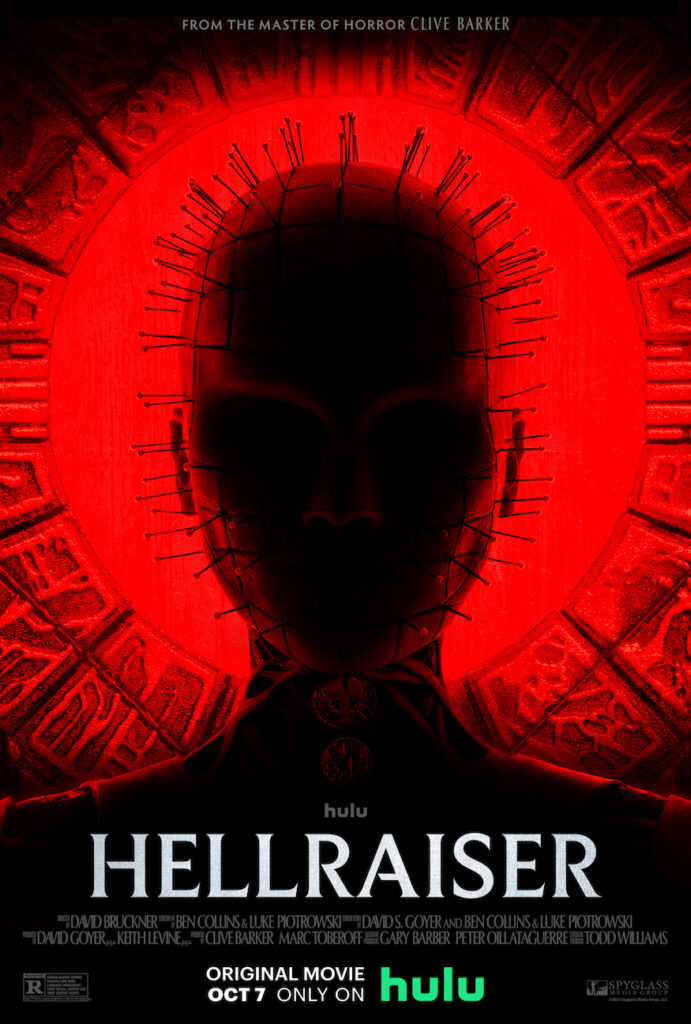 How much did you bring to the script or change it once you came aboard as director?

Well, I like to develop. In our conversations, certain themes of addiction emerged. It felt like an appropriate conversation that related to the original, but it couldn’t be the same story. The original was very much about possession and discovering oneself, and this, for me, was about managing the harm that can come from getting carried away with one’s desires. It was a story I felt I knew how to tell, and that felt like a worthy addition to the HELLRAISER conversation. And then a lot of the development was just getting the rules right and managing the beats.

How did you approach HELLRAISER stylistically, both as opposed to the original film and within your own filmography?

I was always struck by, in the nature of Clive’s prose, a certain elegance, and the poetry of how he writes. The word “elegant” was something we talked about a lot, and so visually, we wanted to bring to the Cenobites and the world of HELLRAISER a certain kind of regality, a kind of grandeur. I was always fascinated by the imagery in HELLRAISER–that you could be looking at something that on one level is really abhorrent, but on the other is quite illustrious, quite beautiful. I believe that filled every frame as we got into it.

I’m not really conscious of how HELLRAISER ties in to stuff we’ve done in the past, at least not when we were making it. Sometimes you step back at the end and go, “Oh, that does kind of echo something we’ve done before.” Some of the kink expressions in the kills hark back to THE NIGHT HOUSE in some ways, and there is kind of a geography/architectural mind-bending quality to the interdimensional doorways in our movie, which is a trope of all the HELLRAISER films, that I think also recalls THE NIGHT HOUSE.

You have your variations on Pinhead and Chatterer in this film, along with new Cenobites. What went into the decision of which of the original ones to keep, and the design of the new ones?

On the script level, Ben and Luke and David Goyer had come in with The Asphyx, who is enduring a self-imposed fate of suffocation, which felt very interesting for a Cenobite and was a great visual idea. They had also conceived The Weeper, who has this kind of religious iconography, but also enjoys separating body parts, and finds a sensual expression in that. Those were two of the creations we started on immediately, and then The Gasp is a riff on the female Cenobite, as she is credited, from the original film. We just let our imaginations run wild, and I have to shout out to Keith Thompson, our lead concept designer, who I’ve worked with on several films now, and who ran with this in an amazing way.

When we got together, one of our early conversations was about how to refashion the sadomasochistic qualities of the original, given where we’re at today. Some of that meant rethinking black leather. Not because we don’t appreciate it; I have such an affinity for the original designs, and I believe HELLRAISER has advanced design more than any other horror franchise. But its spirit was one of invention, and we thought a lot about what it must have been like to see those Cenobites for the first time in 1987, and think, “I’ve never encountered characters quite like this.” It was in keeping with that spirit that we felt we shouldn’t be afraid to do something different with the imagery.

So, thinking about a modern-day conversation about BDSM, we felt that that’s a community that’s in conversation culturally right now, and is very much above board. It’s not quite as transgressive and confrontational as it might have been in 1987, so we felt it would be better to advance body modification in interesting ways, and take the kink and fetishistic elements and embed them into the designs in a manner that was somewhat unexpected. It’s all there, it just hits a little differently. So we came up with this idea of, what if they are their own leather? What if their own skin is fashioned and tailored, almost like runway models? Keith led the way on that, and that was very much the spirit of it.

At what point was it decided to make this movie’s Pinhead a female character?

From the beginning, because there’s no way to replicate Doug Bradley’s performance; it’s too iconic. Doug did amazing things with Pinhead over the years, and it’s so nuanced and so particular, and to me, hearing Doug’s voice and feeling his presence is so much of what the HELLRAISER experience is. So moving forward, we felt we had to differentiate it in some way, and Jamie Clayton plays our Priest incredibly well and completely reinvents the character. She takes whole new risks, she’s sensual, she’s inviting, she plays it at a reserve. I think she’s going to feel different for fans, in a way that I hope will let them into the story and allow them to enjoy it without being burdened by endless comparisons to Doug.

She’s never referred to as Pinhead in the movie, and the end credits call her “The Priest”; was that following the lead of the original, where Bradley’s character is just “Lead Cenobite”?

Yeah, and I always liked that the Cenobites’ names were just what a layman would describe if you were fortunate or unfortunate enough to cross their path. You know, here’s one that chatters, we’ll call him Chatterer, and we have The Gasp, obviously because of the way she talks, and The Weeper appears to weep. To some degree, the culture of the Cenobites and the way they operate are played at a remove. There is still a mystery to them, and that was something we wanted to preserve. I don’t really know how The Priest regards herself, necessarily. Also, I believe it’s been said many times that even Clive’s visions of The Priest did not appreciate the name Pinhead very much.

How much concern was there over potential fan reaction to making that character female, and rebooting the story in general?

We were never concerned about changing Pinhead into a woman. We always felt like that was the best choice. And I’ll also say that there was a lot of precedent for it in the series. The original novella THE HELLBOUND HEART spoke of a pinheaded Cenobite in a way that was rather androgynous, but also female. And it’s been imagined many times over throughout the years in fan art and in the comic books; Kirsty Cotton became Pinhead herself. So it felt like there was a real hunger for that idea, and for me, that was the only way we could remake this franchise, because if we had somebody doing a Doug impression, it would never work.

As far as the other elements, and changing the lore a bit and taking some risks with the design, I think the focus was to get the themes right and have an honest conversation with the material that came before us. A lot of that was had directly with Clive, which was great, because he came on and recognized that this was going to be a different story and an addition to the franchise, not something that tried to duplicate the original in any way. That was something that we all embraced from the beginning. I don’t think we were afraid of it. We wanted to get it right for the fans and give them what they want, but we also had to respect them enough to kind of forget about them and run with our own passions; otherwise, why make the film?

How much input did Barker have?

We talked a lot during prep, and production was a little chaotic, but then we discussed a lot in post. I would share images with him, and obviously he had lots of notes on the script and on the edit as well. He was a creative producer, and very generous with his time. He really fought for us to find this story, to make what we were doing clear and effective, and he knew when to push us, and at times would seek to understand our intentions. He was a wonderful collaborator, and it was an incredible experience for me to work with him in that way. Hopefully there are many more HELLRAISER movies to come.

How much talk has there been about further films?

It’s pretty early. We have to see what people think of this movie, but I love this universe, and I’d be honored to get back into it.