Since his international breakout hit TROLL HUNTER (2010), Norwegian filmmaker André Øvredal has been working on the English-language screen scene, directing 2016’s superb THE AUTOPSY OF JANE DOE and last year’s hit SCARY STORIES TO TELL IN THE DARK. His new feature sees him return to his home country to adapt its mythology into the fantasy-thriller MORTAL, which Øvredal discusses here with RUE MORGUE–along with what he’s got coming next.

MORTAL, in select theaters and on VOD/digital tomorrow, November 6 from Saban Films, stars Nat Wolff (DEATH NOTE, the upcoming THE STAND miniseries) as Eric Bergland, a backpacker dwelling in the woods near a small Norwegian village. When a local teen troublemaker dies after simply grabbing him, Eric is pursued by police and government agents, assisted as he goes on the run by psychologist Christine (Iben Akerlie). As his unnatural powers become more evident and his story develops into a media sensation, his ties to Norway’s mythology become evident, and some of the populace begin seeing him as a god.

Combining paranormal action, allegory and the burgeoning relationship between Eric and Christine, the mixed-language MORTAL is the first of his features since TROLL HUNTER that Øvredal has scripted (with Norman Lesperance and Geoff Bussetil). With MORTAL receiving its U.S. release, Øvredal–who spent some time earlier this year developing a Netflix pilot that didn’t see fruition–is now working on three major projects: the Stephen King adaptation THE LONG WALK (which he previously discussed with us here), the long-in-development THE LAST VOYAGE OF THE DEMETER and, of course, SCARY STORIES TO TELL IN THE DARK 2.

Is it safe to say that MORTAL is your version of a superhero origin story?

[Laughs] Yeah, I would say so. I have to admit, it’s kind of an anti-Marvel movie, because it’s so small-scaled. It’s an intimate story of a couple of people meeting in a distant little village in a country never heard of, in a way–it’s not New York or Paris being destroyed.

What was the inspiration behind it?

Well, obviously, Norway’s mythology is part of my life; you’re steeped in it when you grow up there. It’s not like you hear about it all the time, the actual stories and characters, but it’s always there and present. That was part of my upbringing. But the inspiration was also just the opportunity to modernize something that is basically ancient and dead. There are so many amazing elements that you haven’t seen. To do something fully grounded in Norwegian characters, and the way a small community would react to a momentous event like this, was very intriguing to me.​ 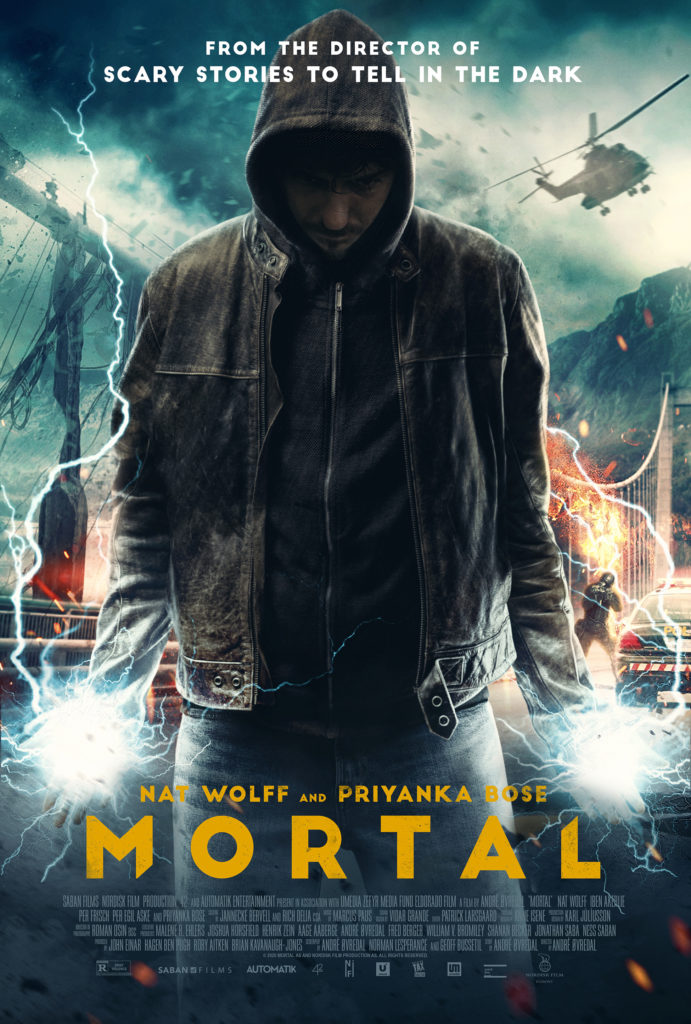 Is there a feeling among the Norwegian people that their mythology has been co-opted by Hollywood, now that Thor is a major movie character?

I think we find it mostly charming and fun; I don’t believe anybody has any negative feelings towards that. It’s just, “Oh, they’ve put Odin and Thor in big Hollywood movies–that’s fun!” We don’t own these characters; the world and history own them. I enjoyed the opportunity to be able to portray this folklore in a very different way; that was part of the joy of making this movie.

Was MORTAL always going to be a Norwegian production, or did you try to get it financed in America?

Actually, it was initially part-financed in America, but Nordisk Film took it over after a while, because they wanted to own the whole movie. But we do have American producers, and there’s a lot of American influence on the movie.

Did you enjoy being back in your home country, working with a much bigger budget than TROLL HUNTER?

Yeah, it was great to have the resources to shoot scenes on a bigger canvas, and be able to tell the story in that same environment but on a larger scale. I could feel that during production, that we were now on a budget many times that of TROLL HUNTER.

I understand Robert Sheehan (THE UMBRELLA ACADEMY) was originally cast in the lead.

Yeah, though our schedules, in the end, didn’t work out. We cast him early, and then a year later, things changed and I had to recast the role with somebody else. I found Nat Wolff, who I was super-excited about; I thought he was spot-on the character I wanted.

Was it always your intention to have an English-speaking star?

It was, because there are millions of Americans with Norwegian heritage, and I have family in the States who sometimes come and visit, all the way back from when I was a kid, to experience their ancestry. That is a big part of the Norwegian culture, that relationship with America, and I wanted to embrace that in a movie. In addition, Eric needed to be distant from these forces throughout his life, or else he would have reacted to them the day he was born. So I needed to keep him at a distance, until he becomes pulled to Norway by some feeling that he needs to go there, beyond just his ancestry. That became a very natural part of the storytelling. We were also open to internationalizing the movie as much as possible, to have an American actor who has recognition value that will put the movie on the radar.

Can you talk about achieving the balance between the big setpieces and the quieter moments between the characters?

That was actually one of the big, big goals for me in MORTAL; I wanted to create a movie that had extreme intimacy and smallness, if you will, and also a grand scope and wide landscapes, and stay at a distance from what’s going on. Juxtaposing those things is a crucial part of the way the story is told, and also the film’s visual language. We shot everything with wide lenses; I always tend to do that, but we utilized them to the greatest degree I’ve ever done on this movie. It felt like a very natural progression of the visual language I’ve been playing with.

Creating that balance between the smaller elements of the story while still having room for spectacular and grandiose elements, and also talking about difficult themes, like religion and how the world would react to a person like this, was the biggest challenge. I tried to weave all these elements into one movie, and it was the same on TROLL HUNTER, in a way–trying to balance the humor and the horror and the documentary approach. I found that fun to play with; I need those challenges to entertain myself, I guess.

Speaking of TROLL HUNTER, would you ever go back to doing a documentary-style film?

I don’t think so, because that is not a natural state of storytelling for me. I’m much more into controlling the storytelling, and one thing I learned on TROLL HUNTER was that the only way to make it work was to step back as a director and not impact the shooting much. I had to discuss things with the actors and the cameraman and set things up, but then I had to step back and let them play, rather than control where the camera went. Rather than dictate the blocking or discuss the specificity of the turns of the scene, it had to feel very organic, and to me, that’s not a natural way of making movies.

Do you want to keep alternating between making movies in America and at home?

Yeah, it’s a luxury to have two worlds and two ways of expressing myself. The Norwegian films may be, in theory, more mine, while the American movies are more culturally relevant in many ways, and very clear in their storytelling and approach to genre, which is what I grew up with and loved. So I’m very lucky to be able to dabble in European, slightly more offbeat filmmaking, and then the very clear storytelling of Hollywood.

Where is THE LONG WALK at this point?

It’s waiting on this damn virus. We’re talking about it constantly, there’s progress in certain areas, we have a wonderful script that we love, we have a studio that is excited about it. We’re basically just in a holding pattern, because we were going to shoot it in California, and California is a really hard place to shoot a movie these days.

How have you seen COVID-19 impact international production in general?

It’s definitely a huge part of every discussion I have about every movie I’m involved with. How to budget it, how to plan it; as I was working on the Netflix pilot, it was constantly part of everything we did. It impacted the budget on that and on other projects I’m involved with, and we’re kind of waiting for it to hopefully go away, and how long are we going to wait? It’s wreaked havoc on production, but a lot of projects are up and running. In Norway, there are tons of movies and TV movies being shot, so we’ve found a way to do it. But also, the virus is barely present there as compared to a lot of other regions.

THE LAST VOYAGE OF THE DEMETER (about the events on the ship that brings Dracula to Britain in Bram Stoker’s novel) has been in development for two decades now. How did you wind up coming aboard that one?

One of the producers, Brad Fischer, is also a producer on THE LONG WALK. We were working together on that, and they were looking for a director for DEMETER, and I loved the script. So I pitched my take on it to them and Amblin, and that seemed to work.

Do you know which tales you’re going to adapt for SCARY STORIES TO TELL IN THE DARK 2?

Yep, we know which stories they are, but unfortunately I can’t reveal them [laughs]! I’d love to talk about it, but right now I have to keep my mouth shut.