Actor Devon Sawa is wearing a RETURN OF THE LIVING DEAD T-shirt when he sits down for his RUE MORGUE interview. He’s not just a regular in horror cinema; he loves this stuff.

Back in 1999-2000, he starred in the one-two punch of IDLE HANDS and FINAL DESTINATION; more recently, he’s starred in Fred Durst’s THE FANATIC and the much-praised HUNTER HUNTER. This season, he had another double whammy, starring as Ken Bates, a toy-store employee facing shoppers-turned-zombies in BLACK FRIDAY (pictured above), and in the dual role of Logan and Luke Wheeler on the Syfy/USA Network series CHUCKY. In addition, Sawa could be seen earlier this year in the limited theatrical release DEATH RIDER IN THE HOUSE OF VAMPIRES, rocker Glenn Danzig’s directorial follow-up to his notorious VEROTIKA. And the actor says he has no plans to stop there…

BLACK FRIDAY is in the IDLE HANDS tradition of combining gory horror with dark humor. Is that a type of genre movie you especially enjoy?

Yeah, though I hadn’t revisited it in a long time. I did a movie called SLACKERS about two years after IDLE HANDS, and it was at that point that I kind of retired the comedy altogether. I don’t know why, I just didn’t do it anymore. Then I read the BLACK FRIDAY script, and I felt it leaned into the IDLE HANDS humor, where you laugh at a head getting chopped off and whatnot, and it felt like a good fit.

Had Bruce Campbell been cast at the time you came on board?

No, I was cast first, with a lot of different filmmakers involved, except I believe [director] Casey Tebo and the writer and a few others. Then there was kind of a switch-up, and Bruce Campbell signed on, and Ivana Baquero and Ryan Lee. They brought this phenomenal cast together, but I was the first and then there was a two-month reshuffle of the deck, and we were fortunate to get the great Bruce Campbell. 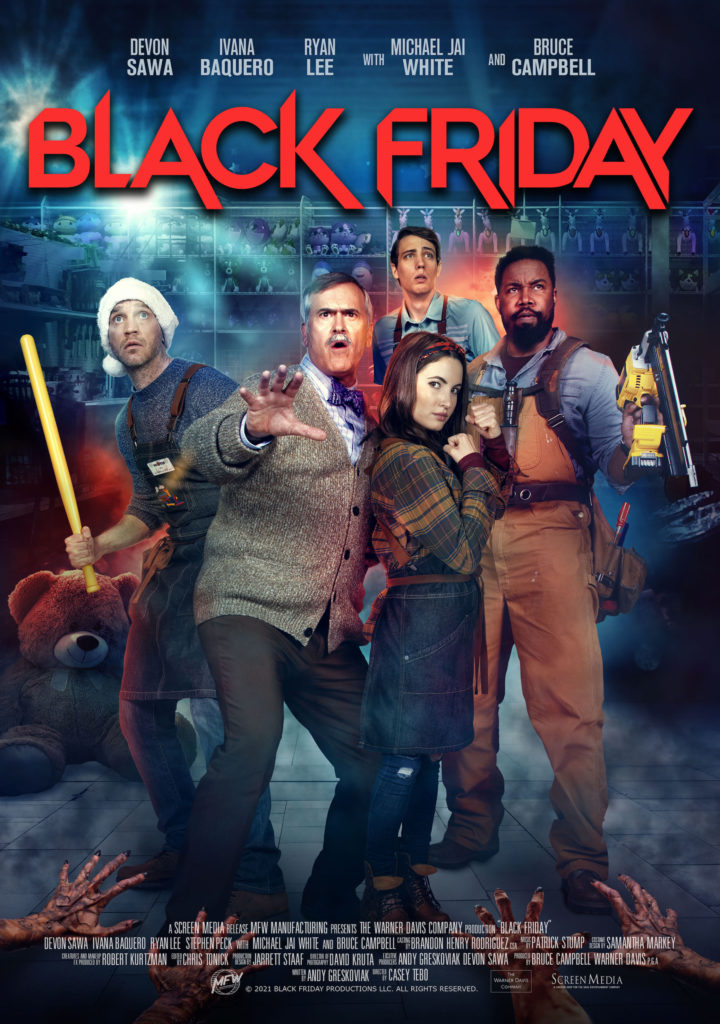 What appealed to you about the role of Ken Bates?

When I read it and saw that he was a middle-aged man working at a toy store that was going to be taken over by alien zombie creatures, it was a no-brainer. It was almost like Anton Tobias from IDLE HANDS grew up and found the ultimate slacker job, doing as little as possible at this toy store–except, obviously, on Black Friday. The concept and the character were just so appealing to me.

Have you ever had a boss like Campbell’s character, or been in a similar situation to Ken’s?

I’ve been in the film business for a long time, and I don’t think I’ve ever had a boss quite like Bruce Campbell’s. But my sister worked in retail, and she filled me in on all the craziness that goes on. I’ve been lucky, I’ve had some great bosses!

How do you feel about the Black Friday phenomenon? Have you ever gone out for it?

No! Being a shopper on Black Friday scares me, never mind being somebody who has to work with those shoppers. When you see videos of Black Friday, you never see anything positive; it’s always the doors getting busted open, people going after that $20-off TV or whatever. And that’s why I thought it was such a great concept: What if we took those crazy shoppers and possessed them, and all hell breaks loose?

How was it working with Campbell and the rest of your co-stars?

It was a lot of fun, though it was right in the heart of COVID, so it was a little tricky. Things were tense at times off set, just because you couldn’t see smiles, you couldn’t see laughter; everybody was covered up, half the crew would have to leave and the other half of the crew would come on. But we all managed to laugh a lot and play in our creativity and have a great time. The young cast was exceptional. They all brought their A game, and there wasn’t a weak link in the chain. Ivana was amazing; we are going to see her blow up, I would say, very soon. She really is a phenomenal talent.

What was it like dealing with the makeup effects, especially under COVID restrictions?

There’s something special about working with prosthetics and old-school makeup. It feels old-school, it feels like you’re doing ’80s/’90s horror when you’re using buckets of blood, when the director is debating on which type of blood for which type of shot; like, this shot’s going to be a close-up, so we’re going to use the darker blood. For me, because I came from that and there was no other choice when I started, it’s just nostalgic and fun. And Robert Kurtzman is a legend at what he does, and he was on his A game as well. 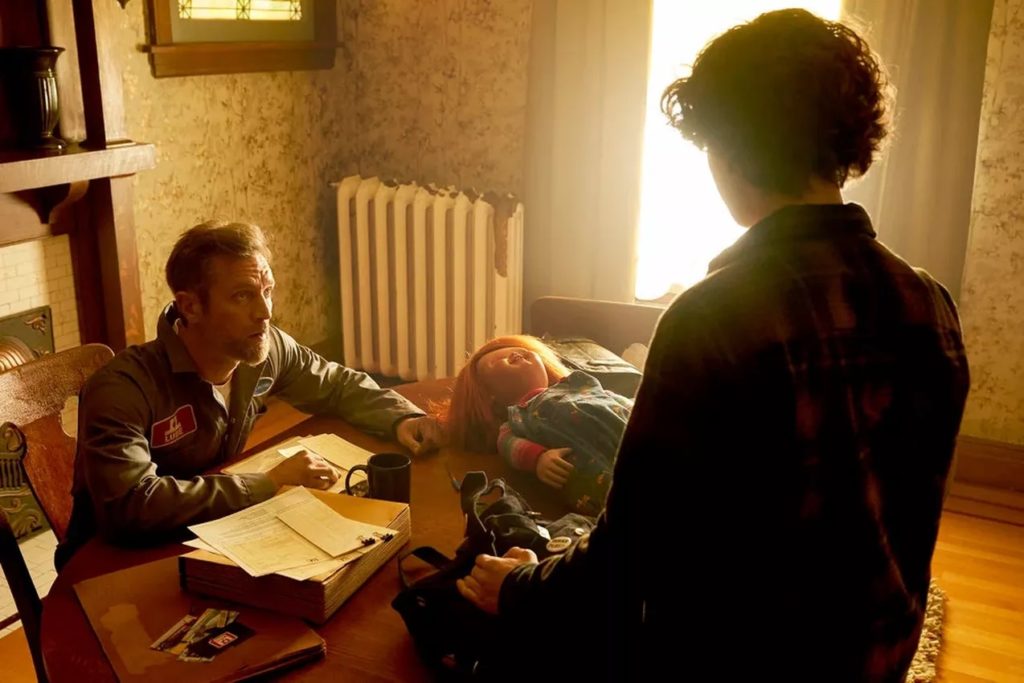 How was it playing a dual role in CHUCKY? Is this the first time you’ve done it?

Yeah; that’s what drew me to the script. Well, first, Chucky drew me to the script. I don’t know if my managers and agents knew what I was going to say when they approached me with CHUCKY, but I had been a Chucky fan from the age of 11 or 12; I’ve seen ’em all. So I jumped at it, and then to find out that I would be doing scenes with myself, I just had to be part of it. And Don Mancini was back, and the original doll was back; I haven’t been this proud of a project in a very long time. It just makes me smile.

How did you go about making Logan and Lucas distinctive?

That’s part of the reason Don Mancini cast me, because when you do an audition, usually you include a slate [introduction], and in my slate I told Don exactly what I believed made these two characters different. They’re twins, they came from the same world, they grew up the same, but at some point they went two different ways. And I felt like Lucas was a broken guy; he was dealt some bad cards, his wife passed away. And in his brokenness, he kind of slouches, he talks a little slower and he’s a little more reserved. And then Logan is successful, so he stands up straight, he’s proud. I wanted them to be different not just in the way they looked; one’s got a beard, one’s wearing a suit, but that’s easy to do. They had to be completely different in the way they moved, the way they sat at the dinner table next to each other. It was a lot of fun to do, and I didn’t really get to see it until it came out, and then to see these two guys arguing with each other was awesome.

As a longtime Chucky fan, it must have been a treat for you when all the franchise’s previous actors started working on the show.

Oh my God, Jennifer Tilly! The reason it was so special was that Don Mancini rebooted this thing for a new audience, because there was going to be a younger generation watching, and then he continued the previous story and showed how Charles Lee Ray became Charles Lee Ray. He’s got it all going on, and it’s for everybody and it’s well-done and it’s smart.

Alex Vincent is a very cool guy. He was nervous doing his first scene; I guess he hadn’t done anything for a few years, but he was excited. Jennifer Tilly is such a ball of energy; I love her, and we’ve become good friends, and she’s very special. It was just so much fun to be on set with all of them, and we hope we’ll be able to do season two.

What led you to DEATH RIDER IN THE HOUSE OF VAMPIRES?

I’m a big Rob Zombie fan, and one of the reasons I did THE FANATIC was that I felt working with Fred Durst would be a great time, that rock-star energy. And then when the infamous Glenn Danzig is going to make a movie about vampires, spaghetti-Western-style… Sometimes you’ve just gotta do stuff, you know what I mean? He’s an interesting cat; he’s like a punk-rock filmmaker. One time he didn’t like the color of a wall, so we all waited six hours while they repainted it. It was just bizarre and awesome and all sorts of things. Eli Roth came onto the show, and he was like, “Dude, we’re part of something; you’ve just got to have a good time with this,” and I was like “Yeah!” And that’s what we did. It’s a different kind of thing, and I loved that I did it.

Danzig had gained some notoriety for VEROTIKA; were you aware of that when you became involved with DEATH RIDER?

I didn’t know anything about VEROTIKA, and I’m glad I didn’t. I don’t know if that would have played into it at all. I only found out about VEROTIKA about halfway through shooting DEATH RIDER, but it is what it is.

As a horror fan, do you actively seek out genre projects to do, and do you have any ambitions to direct one?

I do seek them out. My agents know that I like to try to do horror at least once or twice a year. I just finished a film called CONSUMED that I’m really excited about. When I was 8 or 9 years old and I wanted to be an actor, it was because I wanted to pretend to be different people, and I think horror and sci-fi are the furthest away from reality that you can get. It makes you feel different and it scares you. So yeah, I seek them out, and I try to find good horror. When I found HUNTER HUNTER, I knew it was going to be special, so I did that, and then BLACK FRIDAY came along. I’m trying to be more selective with the horror I do, and I love doing it. As for directing, maybe someday, but I like being in front of the camera for now.