DEVON SAWA returns to his roots with a starring role in the Canadian survivalist horror film HUNTER HUNTER as well as an appearance in Glenn Danzig’s upcoming DEATH RIDER IN THE HOUSE OF VAMPIRES. We featured Sawa featured in RUE MORGUE #197, now on stands and available in the Shoppe. Excerpts of the interview follow….

Did you love horror as a kid?
Yeah. I really did. When I was a young fella in the ’80s, I had a ABC video card in Canada, so ABC video would let me and my friends rent whatever we wanted at a very very early age – I’m talking six or seven years old, we were renting things like Elm Street, Pumpkinhead – you name it, we were renting it as soon as we could. Horror was always in my life, I was always watching horror, I’ve always been a huge fan.

You were in some of the most influential horror movies of the ’90s, including Final Destination and Idle Hands. Why do you suppose these films have aged so well?
I think Idle Hands is better now than it was back then! I don’t know, it’s just the simplicity of the films. They weren’t relying too much on special effects, so those didn’t have to age at all, which is kind of practical. Like old, classic scares. It was just the simplicity of the films.

Having worked in the horror genre so long, what’s changed the most about horror movies in the past 25 years?
It just keeps changing. For a little while it’ll be teen horror films and then it’ll go on to haunted house, ghost stories. It’s always becoming fresh [again]. I think with the release of Crawl last year, I think we’re going to go back to those kinds of films, which I’m very excited about. I had such a great time [with that one], and then there was also Ready or Not.

“I think Idle Hands is better now than it was back then!”
-Devon Sawa

In the 1970s, Margaret Atwood wrote that Canadian literature tends to struggle to find a sense of national identity that differentiates it from British or American cultural output. Does this apply to Canadian horror movies, in your opinion?
Canadian cinema, for some reason, has always kind of struggled with being taken as seriously as American [cinema], and it’s so strange, because the actors we produce, the directors we produce, the crews that we produce, are all top-notch but for some reason, we have to have an American come up and produce it, I don’t know. I don’t know if that answers your question? It does struggle to be taken seriously, I think. It’s crazy because I went up there to Winnipeg and everybody was just killing it. The crew, the cast was just hard-working it is a little bit of a struggle to be taken seriously in the mainstream. It’s crazy because Final Destination was 90% Canadian! The director and the writer and some of the producers – a large portion of it was Canadian.

I really loved The Fanatic, which kind of caught me by surprise. Tell me how you got involved with that project and how was it to work on?
I did another movie with John Travolta two years back, and he read manuscript for The Fanatic and I had to fight Fred Durst for the part. He wasn’t feeling it at first, and I just decided to go down to the studio and put myself on tape. I think I must have done every scene [for my character], it was like a 20-minute tape of just all the scenes and I sent it to him and he watched it and that was it, he gave me the part. Travolta pushed for me a little bit because we had worked together, and I did it. It was a wild experience and you know, people love it and people hate it, but at the end of the day, it was a lot of fun.

I have to ask what it was like to work with Glenn Danzig on Death Rider in the House of Vampires.
Holy shit, you’re the first person I’ve had to answer about this. I haven’t done anything since I worked on it, but I gotta see the film. Listen, Eli Roth came on and he kind of talked me off the ledge a couple times because it’s like doing a movie for the biggest punk rocker in the history of punk rock. He’s Glenn Danzig, and things aren’t normal sometimes in I guess a good way? They were unconventional, that’s for sure. But look, we’ll see, everyone had a great time, it was just very unconventional.

Did you see Verotika?
I hadn’t seen it, I didn’t even know about it. I did this movie in Winnipeg, and it was one of the greatest experiences I’ve had in a long time, was this movie in Winnipeg. I’m saying, oh my god, I spoke with artists and everybody was there to work, and then I get this script for the Glenn Danzig project and I thought, Glenn Danzig doing a movie. This is going to be amazing, it’ll be all music, and this and that. And it’s a movie about vampires but it’s a spaghetti western and maybe it’s just I worked on SLC Punk! and Idle Hands, and I thought this might just be fucking awesome. And so I just signed on and a couple of weeks into it I heard about Verotika and I haven’t seen it still but it is what it is. But the nice thing is that he had a great cast this time, and a lot more budget so we’ll see. I think I’ll see Verotika after I see [Death Rider] I don’t want to lose sleep at night for the next 60 days.

More on DEVON SAWA returning to horror in RUE MORGUE #197, available now in the Shoppe! 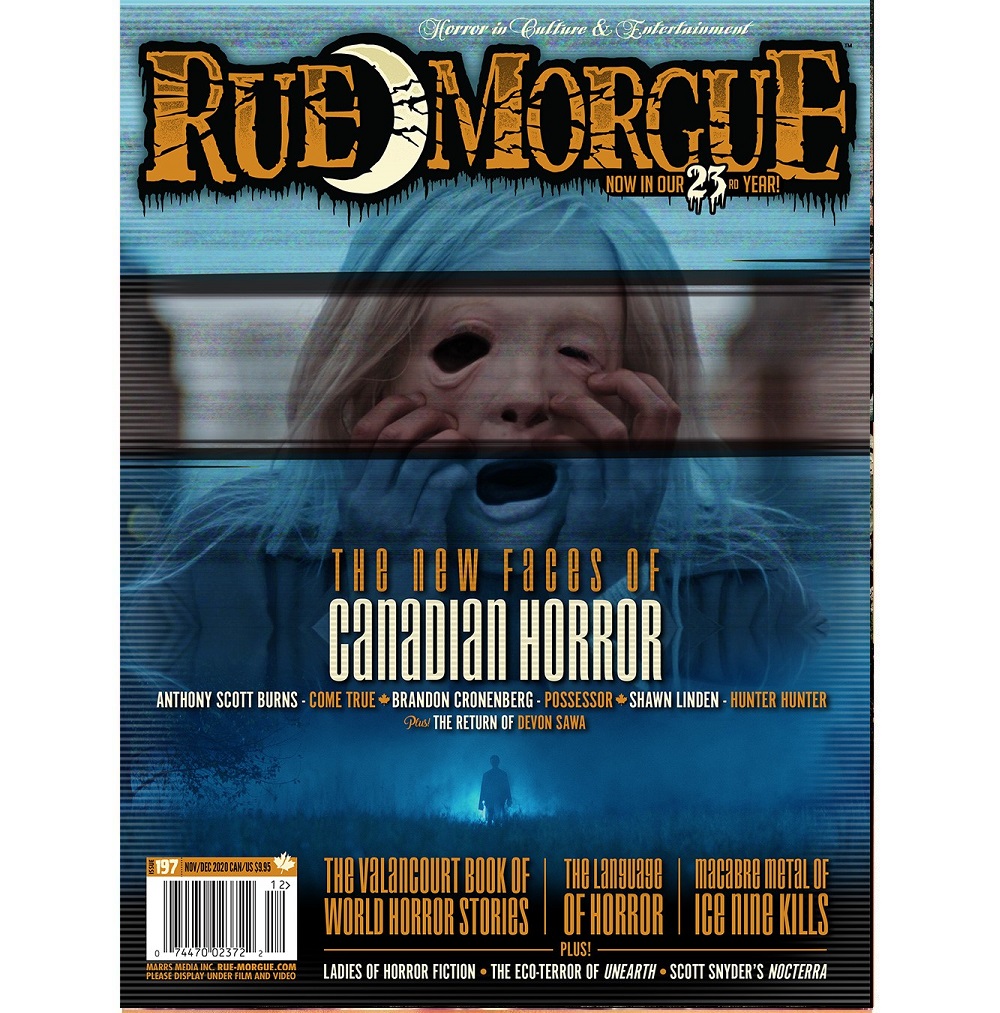