Exclusive Interview: Dancing with the scars—the cast of the zombie musical “ANNA AND THE APOCALYPSE,” Part One

One of the brightest and bloodiest surprises of 2018 is ANNA AND THE APOCALYPSE, a UK production that combines high-schoolers, the undead, Christmas and musical numbers. Having already won a fervent following from its festival tour this year, the movie begins its U.S. theatrical run on Friday, and RUE MORGUE sat down with its stars for an exclusive chat.

Opening in select cities this Friday, November 30 and going wide December 7 from Orion Pictures, ANNA AND THE APOCALYPSE is set in the small town of Little Haven during the Yuletide season. While its teenage characters are dealing with assorted personal dramas, the spread of an undead plague forces them into a fight for survival—which still leaves them time to break into song and dance, performing a variety of terrific tunes by Roddy Hart and Tommy Reilly. Director John McPhail and screenwriters Alan McDonald and Ryan McHenry expertly integrate played-straight horror, honest emotion, on-target comedy and the exuberant musical numbers (see our review here), and at this fall’s New York Comic-Con, we spoke with Ella Hunt (who plays Anna), Malcolm Cumming (John), Sarah Swire (who choreographed the film in addition to portraying Steph), Ben Wiggins (Nick), Marli Siu (Lisa) and Christopher Leveaux (Chris) about this most entertaining genre-blender.

How did you each adapt to the movie’s combination of horror, comedy and musical elements?

ELLA HUNT: It was very helpful that John was so comfortable with being a balancing podium for all of us. He so knew the film he wanted to cut together that for each scene, we’d come in and all have our set, different ideas about the arcs of our characters and where we needed to be, and he’d go, “I also need this from the scene, because otherwise the film as a whole isn’t going to have the right tone.” For Anna, it was all about trying to find time to let her be all the things I wanted her to be. I wanted her to feel like a bad-ass, but I wanted her to grow into that, so Sarah was super-helpful in terms of how I did that physically, and so was [fight arranger] Emmaclaire Brightlyn—from the first time she sees the zombies and how she reacts to the last time she does, and how she wields her candy cane and grows into that. 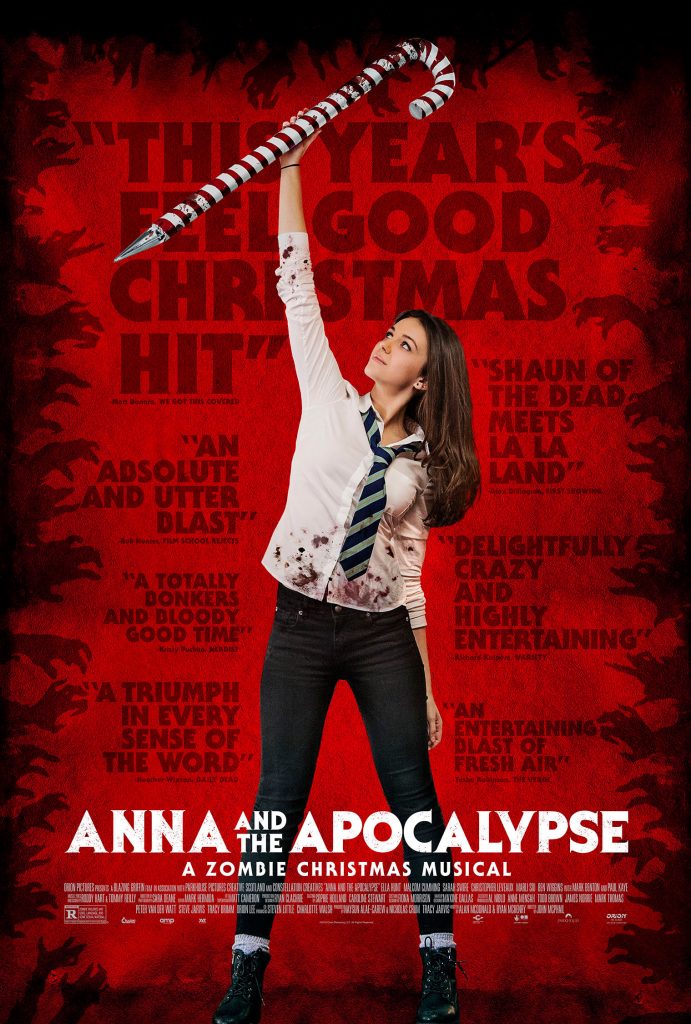 CHRISTOPHER LEVEAUX: Alan and Ryan’s script gave the characters lots of dramatic moments and comic moments, so like Ben said, all we had to do was play it real, and that took us in the right direction and on the right journey. John specifically helped us find the right tone.

SARAH SWIRE: What did you say? [Laughter all around]

MC: Well, there goes my train of thought! Anyway, you have to map your journey, and I did that. There are a couple of key scenes where I felt like this was the moment where my character’s world shifts internally, and he finds out something new. But then, when you turn up on set every day, you’re trusting that everything the camera operators are doing and all the lighting and the design that has already been put into place is going to do some of that work for you. When you give yourself up to that process and trust those super-passionate people to do their jobs, and just play within the realms of what the director is giving you, that really helps set the tone.

MARLI SIU: The script was so clear about where the tone was; none of the characters ever say anything that felt opposed to how they would feel in that moment. The sensitive moments and the exciting and comic moments were mapped out so clearly, it was very easy for us to follow. And if there was any confusion, John was there with us the whole time, saying things like, during “Human Voice” he said, “Don’t fuck around, this is serious at this point.”

EH: One of the things I was most excited by when I first watched the film was that I knew what the four of us were doing in the bowling alley, but I had no idea what Marli and the others were doing in the school. Watching that scene for the first time, I was so excited and moved by how John had managed to set us all on the same tone. Everybody had tears in their eyes; it was such a moment in the film, and we didn’t shoot it all on the same day. I was like, how did that through-line run so seamlessly? And that was John.

What are your memories of working with the zombies, and the gore and makeup effects that came with them?

EH: We got to know the people playing the zombies quite well. We didn’t have many stunt guys; we were shooting in Scotland and there aren’t many around, and just in terms of budget, we needed to reuse people. There are people who are actually zombies in the film several times, at different points, so they were familiar faces. We’d be like, “Oh, hey, John!” or “Hi, Barry!” That was kind of funny, actually getting to be friends with the zombies [laughs]!

MC: One of the producers, Nicholas Crum, makes a few appearances as zombies and whatnot.

EH: During “Give Them a Show,” that final number where there’s loads of zombies, there was a moment when they were all coming toward me, and I was terrified; it was actually scary. That’s definitely a compliment to the makeup and prosthetics team; they went above and beyond what I expected.

BW: I think the bit we were most excited about was toward the end, where Anna is walking through this corridor of zombies, angry, just smacking everything. That was originally going to be a big, big fight sequence with everybody involved, and because of time, it became Anna’s moment of, “I’m pissed off now!” And for my character as well, it was just so fun to smash a bunch of stuff. And to get those shots to work, how many times did we have to do some of those takes, just because, you know, “That was not quite right, this bit went wrong.”

EH: You don’t actually want to whack people in the head.

BW: Yeah, that would be problematic; you don’t want to whack people in the face!

EH: That scene Ben is talking about, when Anna has the moment where she comes into her own, and we go into slo-mo with her and she’s whacking zombies—we mapped it out, and we’d roughly gone through it with camera. [Cinematographer] Sara Deane had the camera on her shoulder and was walking backwards while I was walking forwards. We rehearsed it, and then we went for a take, and nobody had told me that I was going to have blood splattered on me as I went through it! So I went for my first hit and got blood on my chest and that was fine—blood, right, OK, carry on! I went for my next, like, under-whack…that’s definitely not what it’s called… [Laughs all around]

MC: She was aiming for a small cog!

SS: And while all this was happening, Raymond [McArthur, makeup artist] was just underneath Ella with the blood tank, going… [mimes spraying blood]

EH: And then I got to the final big moment where I swing my candy cane around my head and then into a person’s cheek. And as I was going for that, I got this full-on splatter of blood right in my face, and I hit the camera. The matte box fell off, and the set went silent, and there’s a blooper of me going, “Ahhh!”