From HOBO WITH A SHOTGUN to WE ARE STILL HERE to POSSESSOR, cinematographer Karim Hussain has tackled pretty much every kind of horror there is. ORPHAN: FIRST KILL presented him with a unique challenge, however: find a way to film an actress in a 13-years-later prequel where she’s supposed to be younger than she was the first time around.

In ORPHAN: FIRST KILL, now in theaters, on digital and streaming on Paramount+, Isabelle Fuhrman (see our interview here) returns as the homicidal woman-child, first seen in an Estonian institution under the name Leena. She takes on the name Esther to pose as the missing daughter of a wealthy couple (Julia Stiles, interviewed here, and Rossif Sutherland), and they take her in, little knowing about her evil intentions. Fuhrman was 10 when she made the original ORPHAN and 23 during FIRST KILL’s shooting, which posed a challenge for Hussain, director William Brent Bell and the rest of the prequel team–which wound up influencing the movie’s overall look…

How did you become involved with ORPHAN: FIRST KILL?

I had shot Simon Barrett’s SEANCE for Dark Castle Entertainment previously, and they were very happy with the look of it and how the whole production went, so Alex Mace and Kelly Gallagher at Dark Castle came to me with ORPHAN: FIRST KILL. At the time, its shooting title was ESTHER, and they were talking about releasing it under that title for a while. I met with the director, William Brent Bell, who was a big fan of POSSESSOR, and he was also interested in having me involved. This was right before the pandemic happened, and then everything shut down. So the movie got delayed a little bit, and they asked me to stay on after preparing it, and then we shot it in the winter of 2020. That was before any vaccines or anything existed, so ORPHAN: FIRST KILL was made under serious COVID restrictions; we were shooting in kind of a medical-hospital environment.

The movie has a small cast; was it scaled back in any way to adapt to COVID-era shooting?

No, actually. There were some scenes with quite a few extras; you never felt that the content of the movie was different because of the pandemic. It was just always meant to be a small, intimate family drama, like the first one. It’s almost like a Claude Chabrol movie mixed with a horror film; there’s a lot of class-struggle stuff in the picture, and it does have a certain twist that plays on social stature and things like that. I think the writers were inspired by the idea of doing a social-class-commentary movie as well a prequel to ORPHAN, trying to follow the through-line of what happened before the original. 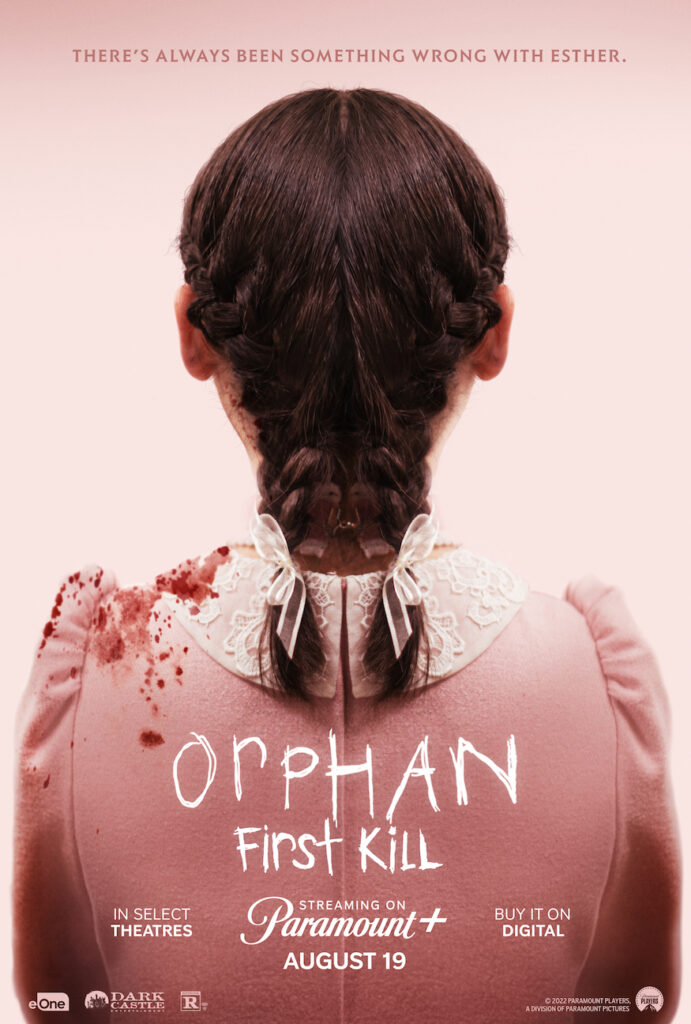 Was there any talk about continuing the visual style of the first film?

Well, ORPHAN: FIRST KILL looks very different from the first movie, while having a few homages to it. The entire visual approach was very much based on the fact that Isabelle Fuhrman, at the time a 23-year-old, had to play a 30something woman pretending to be a child. So we couldn’t put too many shadows on her face, and we wanted to achieve most of this effect practically, which was a really big challenge for a cinematographer. We couldn’t use hard light and shadows, things like that, which was how the first movie looked. ORPHAN: FIRST KILL has an awful lot of diffusion, soft vintage lenses and things like that. It almost looks like a movie from the 1970s, like DON’T LOOK NOW, or if you want to go to the ’80s, like Donald Cammell’s WHITE OF THE EYE, where they went nuts with the diffusion. We had to make that the look of FIRST KILL, because if they were going to want to achieve the Esther effect practically, we had to have the softest image possible. That choice meant we had to soften the overall image up, because we couldn’t just cut to close-ups of Isabelle and have it softer than the rest of it.

This vintage look was used almost ironically in the movie, which actually has a lot of irony to it. It’s very much tongue-in-cheek; it’s not trying to play everything totally straight. That lighting for some of the dinner scenes almost made it a parody of this idyllic-family-life look–it’s so beautiful, it’s so glowing, everything’s supposed to be fine, and it’s all an illusion.

And so much of it was trick photography; every single shot that Isabelle Fuhrman is in is a special-effects shot, but all old-school practical effects, which made for some pretty absurd sights on set. When you weren’t actually looking through the camera and saw what we were doing behind the scenes, it was pretty crazy.

Can you elaborate about those tricks?

Basically, any time you see a performer beside Isabelle Fuhrman, they’re wearing huge Gene Simmons-size platform boots. Then in the wide shots, an actual child performer would come in, so then the boots came off. And the boots were measured to the point where the top of Isabelle’s head would reach the exact point that the child performers’ heads would reach on the actors. When they’re sitting at a table, every single chair that Isabelle sat on was specifically constructed to be shorter; for the scene where she’s drinking the wine, bottles that were larger than normal were used. All sorts of crazy tricks; for some scenes when they were walking for a considerable length, we had to build huge, elevated apple-box runways for Julia Stiles, and then Isabelle was walking normally beside her. All those shots ended up taking really long, longer than on a typical movie. We shot with two cameras operating simultaneously all the time, so the placement of them was very specific.

How did the actors take to all the odd stuff they had to do to sell the illusion, especially Fuhrman?

I think Isabelle probably had the strongest legs in the entirety of North America by the end of this picture, because at first we built some specialty rigs with the special effects department that were kind of like modified wheelchairs, but they just didn’t work. After trying all the tricks we could do, we found that her just kind of squatting like a duck and walking low worked best. There are a lot of really long Steadicam shots in the movie, and we didn’t want to compromise the mise en scène, which has a lot of flowing stuff and a very mobile camera, for these special effects shots, because then the movie would be visually dull, just a bunch of static shots, with everybody being careful not to move too much. So Isabelle just used her strength as a performer, and her physical strength–she’s a strong lady, man! She was incredibly impressive, delivering what I think is a very good performance while working under this physical duress.

But certainly, for Julia Stiles and Rossif Sutherland and Matthew Finlan, playing the family, it was pretty absurd. Rossif is a very tall man, and in some scenes, going through doorways was a bit of a challenge; he had to bend to fit through them wearing the platform boots. But they’re all amazing performers, and they made it work.

Can you talk about the long tracking shot in the institution that employed Fuhrman and both of her doubles?

That shot was crazy. It’s a combination of, I believe, three shots combined, because they were done in different parts of this one old mental hospital that we dressed up with our excellent production designer Matthew Davies. We basically planned it with what we call old-school cowboy switches, where the camera would move around one end, Isabelle would duck into a corner, then the child double would come out from behind, she ducked around another corner, the camera would pan away, then pan back to where the double had been and Isabelle would be there. There were a lot of switch-outs behind the camera, and we also had to make the exact same corridor look like two separate pieces. We did one pass and then there’s a CG combination on a door opening, and then she’s actually going down the same corridor again, only redressed [laughs]. Because we didn’t have a lot of corridors; the location was great, it just wasn’t that big. So that was a very complex shot, and kind of a tour de force.

That was all done with my Steadicam operator Yoann Malnati, who I’ve done a ton of movies with, like POSSESSOR. All of my best films have been with Yoann, and he is always an absolutely huge advantage to my cinematography, and the best Steadicam operator I’ve ever worked with. He’s a big horror fan too, which helps. Our favorite Steadicam movies are OPERA, WHITE OF THE EYE and STREET TRASH, so we have the exact same references.

Can you talk about the use of black light in ORPHAN: FIRST KILL?

It was a homage to the first movie; there are all these little clues and Easter eggs hidden throughout FIRST KILL as to how she got to where she wound up in the original. So the black light was actually something Brent was thinking of. It was very modestly implied in the script, and Brent, particularly in discussions when we were shot-listing the movie, came up with the idea to elaborate on that and make that a part of Allen’s [Sutherland] painting style, which then cements the style that she carries through in what chronologically follows in ORPHAN. Where does she learn that style? Well, she learned it from Allen, it turns out. So with Matthew and his whole art team, there was a lot of work finding the correct paint that would work under the black light, and also supplementing that with other light that would be more powerful. From a technical perspective, it was really fun; I love shooting black light, I’ve done it on a bunch of movies before and I think you can do a lot of great tricks with it.