The horror audiophile reared during a pre-Audible landscape got their murder-and-mayhem kicks through records inflected with the unmistakable voice-over work of horror royalty the likes of Boris Karloff and Vincent Price. A young Bradley Steele Harding spun his share of those vicious vinyls, and his new feature, 13 TRACKS TO FRIGHTEN AGATHA BLACK, is as much an homage as it is an endeavor to inform others about a medium that’s still thriving.

Just as many of us seek refuge in our favorite films during difficult times, Agatha (Bridie Marie Corbett), faced with personal loss, does likewise with an assortment of horror albums from her childhood. But when her creature comforts begin to bleed into her real-world interactions, Agatha realizes she’s spiraling towards a fate far more deadly than any earworm could ever be. On the cusp of the film’s physical and digital release, Harding spoke with RUE MORGUE about his work. 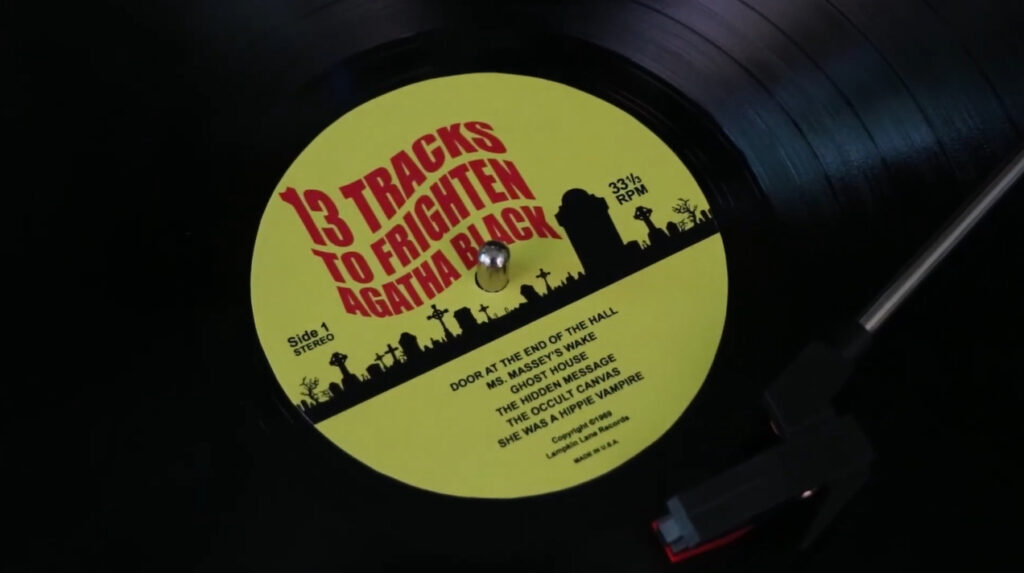 Spoken-word horror albums aren’t terribly en vogue at the moment, but there’s no denying they’ve inspired you enough to base an entire movie around them! Bring us up to speed about their existence. When were they most popular? What were some of the bigger releases? Most famous narrators? And, for anyone that’d like to familiarize themselves with spoken word horror, where would you recommend they begin?

I spent my grade school years in the ‘70s, which was the last big decade for vinyl records. Back then, record players were as common for kids as iPads are today. Listening to records was a major part of play – especially early in the decade when there were only three or four television channels to keep you occupied. There were specific labels that catered exclusively to kids, including Pickwick, Peter Pan, Power Records, and of course, Disney. Many of the albums produced were spoken-word stories. Sometimes these were sparse productions read by one performer, while some might have a full voice cast with sound effects and music. They were similar to the radio programs that were popular in the decades before television. Some of these releases were “scary story” or “scary sound effects” albums. Younger horror fans are probably more familiar with the sound effects recordings which were still big in the ‘80s and ‘90s on cassette and CD.

Some of the big names in horror, including Boris Karloff, Vincent Price, and Christopher Lee put out multiple spoken word albums in the ‘60s and ‘70s. I’m not sure how popular the various releases were, as there wasn’t a proper album chart for children’s albums, but so many of them were produced that they must have been profitable for the various labels. For those who are curious, I would seek out either of Karloff’s Tales of the Frightened releases or anything Price did for the Caedmon label. Many of these are accessible in some form online. 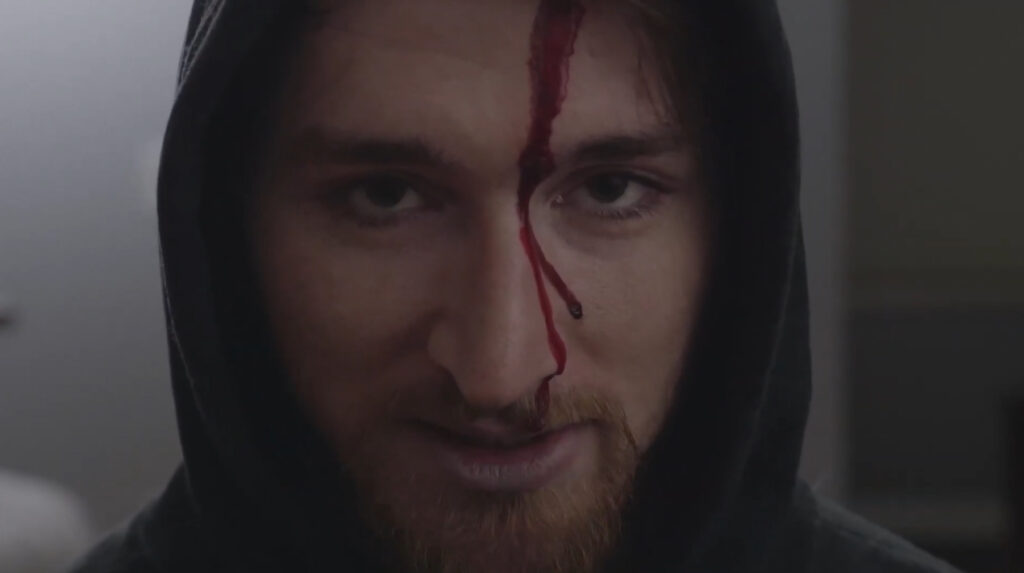 Even though the titular 13 Tracks are interfused with the filmed narrative, the audio portions are capable enough to stand on their own – insomuch that you’re working on a separate release of just the spoken word segments. Take us through the creative process of independently building out these two mediums, album and film,  and marrying them in a way in which each is stronger when complemented by its counterpart.

The stories were fully written in the finished script. Most were inspired by favorite spoken word records – more so in tone than in a narrative sense. Each story that Agatha, our protagonist, listens to in the film had to drive the narrative, or at least offer some piece of valuable information. The stories, or the pieces of the stories that the viewer hears, had to work on several levels. When I was writing the script, I would listen to some of my favorite story albums and try to capture a similar mood or style. I wanted to include some of the more playful stories written for grade school kids as well as the more “adult” titles that were produced as well. I had the advantage of working with the composer/sound designer Andrew Jones, who is also a fan of the subgenre, so I could go deep into the weeds and add music cues in the script as well. These cues were more for Andrew and would read, “weird ‘70s electronic music” or “creepy ‘60s organ,” and he would know what I was referring to.

Early in the scripting process, I had ideas about what each story should convey, and then, I would choose a specific album or “wall of sound” from a decade to lean into. They had to feel like they were authentic recordings from decade-specific releases, and they had to help move the film’s narrative forward. The action in the film definitely would not work without the compelling audio, but I think we created some engaging stories that could be enjoyed independently, in the dark – and on vinyl of course!

For the indie director trying to stretch every dime as far as possible, there’s justification and sometimes, a general acceptance by genre fans when aspects of a film are tamped down. It’s not uncommon to hear uninspired stock music used throughout a movie, necessitated by budgetary constraints. That’s not the case with 13 TRACKS, as the musical score is eerie and unnerving. How did you ensure your soundtrack was such a hearty offering?

Like the stories, Andrew and I were discussing the soundtrack even before I completed the script. We both felt it was important that the film had a true score in addition to and separate from the music heard in the various stories. Much like the stories in the script, we both have favorite scores and soundscapes from certain films and sometimes wanted to emulate a specific style or mood. After the film was assembled, I went through the scenes with Andrew, and we discussed what music or soundscape would best serve them. We both love John Carpenter and Goblin scores and wanted to infuse the film with a ‘70s grindhouse attitude. One of my favorite moments of postproduction was going to Andrew’s home recording studio and watching him and his session musicians put together the soundtrack. These guys were all crazy talented and would just watch scenes from the film and start jamming. At one point they were working on a Carpenter-esque cue that I knew immediately was going to be the theme of the film. I almost started to cry because the first raw take was so goddamn good!

I could not have made this film without Andrew and his incredible gift as a musician. Much of the credit for its success should be given to him.

As well-acted as Agatha is in the hands of the excellent Bridie Marie Corbett, the character isn’t afforded a lot of dialogue. There are several instances when she lies low while the spoken word overlay does the heavy lifting. Your narrative dictates this, but was it weird or awkward having her involved in these extended scenes in which you’re just capturing her reactions to the albums?

I knew when I was writing the script that it would be a challenge to make certain scenes visually engaging. After all, film is a visual medium, and watching someone simply listening to a story could potentially be very tedious. But my original inspiration for the film was Let’s Scare Jessica to Death, a terrific thriller from 1971, where we hear the inner dialogue of the fragile protagonist throughout. Zohra Lampert gives an incredible performance as the title character without a lot of spoken dialogue. I knew that if we could capture a similar vibe, then perhaps we could make something just as compelling.

The key to making it all work visually was finding our lead, Bridie Marie Corbett, who completely understood the character and what we were attempting. She really “got it” and was there with me 100 percent. She’s an incredibly striking person, and her charisma onscreen is palpable. If she was uncomfortable or felt weird about what she was doing, she never let on. We were able to record a few of the tracks [and] stories in advance, so while we were shooting, she could listen to what she was reacting to. Sometimes, we simply had to read the story to her while she played out the scene. It didn’t matter though. She was completely engaged and grounded, no matter how challenging the scene was. I will forever be grateful to her for bringing that character to life. 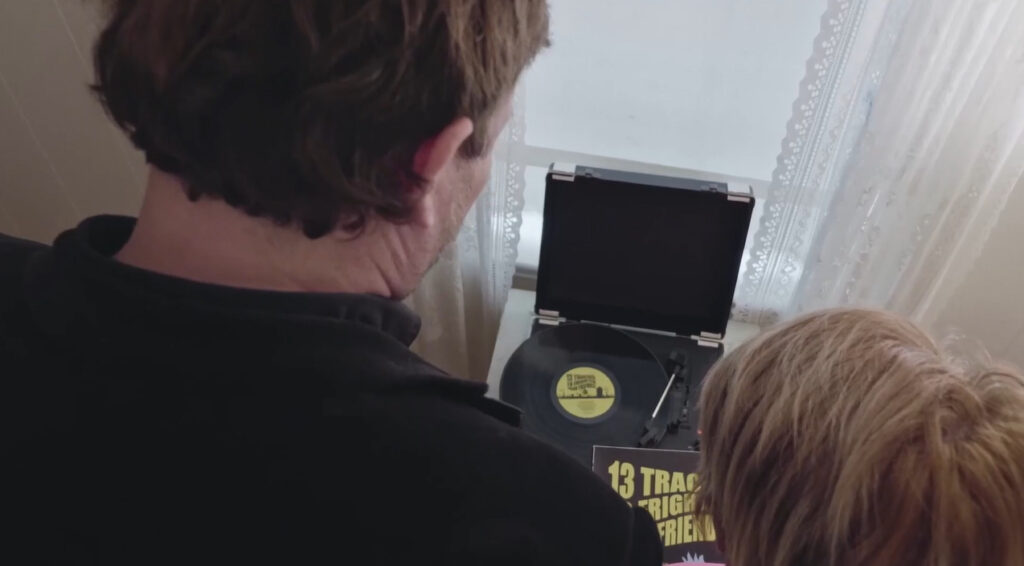 13 TRACKS, as is the case with any film that attempts to do something outside the norm, will likely qualify its viewership rather quickly. This isn’t another retread of a zombie or slasher trope. This is creative ingenuity at its peak. Was the gamble worth the effort? What kind of feedback are you receiving, and what would you say to genre fans who aren’t willing to explore something so original?

It was completely worth it! I don’t see it as a gamble at all because the actual release is just the gravy. Making this film was the most satisfying creative endeavor of my life so far. Getting to work with Andrew and Bridie and all these incredibly talented people was just everything. So far, the feedback has been very positive. Even people who aren’t fond of slow-burn horror films have at least acknowledged the originality of the storyline and the quality of the production. I am a horror geek myself and understand that the genre encompasses a wide array of “flavors.” I know that audiences who grew up in the ’70s will definitely dig a lot of what the film has to offer. I also think that younger horror fans who are looking for something a little different will be able to connect with the unique narrative. A recurring question posed on those Karloff albums I mentioned earlier is, “Are you one of the frightened?” If anyone reading this can immediately answer, “yes,” then without hesitation, they will absolutely enjoy the film.