Exclusive Interview: “Backcountry” Director Adam MacDonald Goes Back to the Woods with “Pyewacket”

It wasn’t exactly a horror film, but, with its black bear-induced gore and carnage, actor-turned-director Adam MacDonald managed to do for the Canadian woods with Backcountry (2014) what Steven Spielberg did to the ocean with Jaws: make them seem terrifying.

So we were curious to see what MacDonald could do with a straight-on horror project. Shot in Sault Ste. Marie, Pyewacket stars Vancouver actress Nicole Muñoz (Hemlock Grove) as Leah, a teenager who turns to black metal and black magic to cope in the wake of her father’s death. After an argument with her mother (The Walking Dead‘s Laurie Holden), who has moved her up north away from school and friends, an angry Leah decides to call upon the demon Pyewacket to kill her. Mother and daughter soon reconcile, but the damage is done: Pyewacket has been called.

Pyewacket made its debut in the Contemporary World Cinema category of this year’s Toronto International Film Festival. Rue Morgue sat down with MacDonald at eOne’s Toronto office during TIFF to discuss the film’s origins, black metal, and whether its witchy ritual is real. eOne is giving Pyewacket a small Canadian theatrical release starting this Friday, December 8, with IFC Midnight putting it out in the US next year. 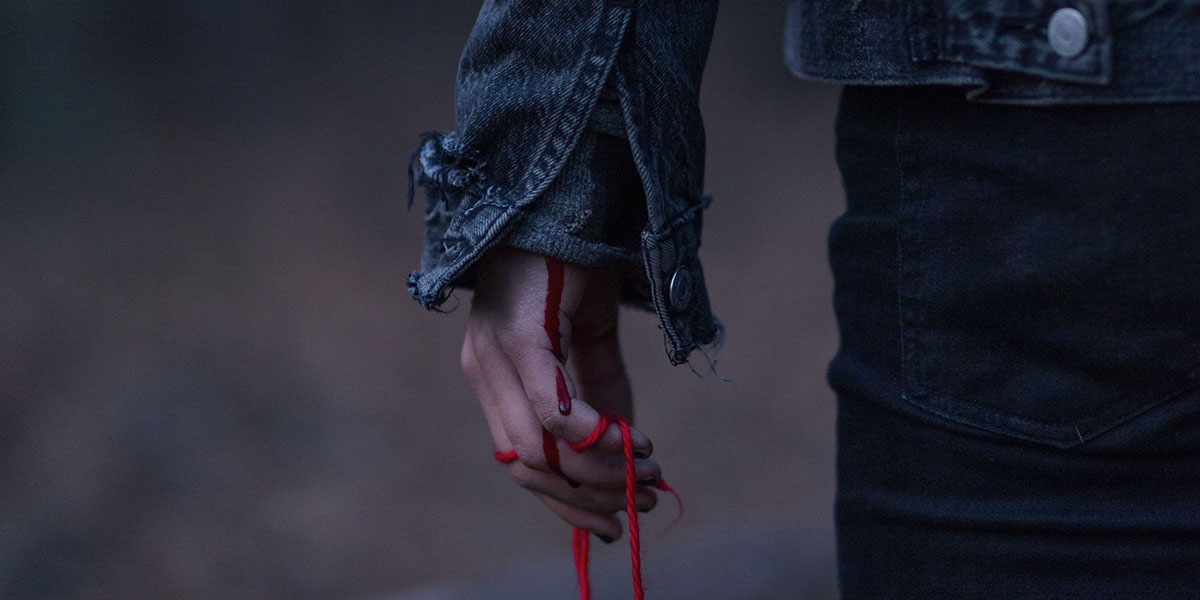 Talk about the origins of the script. I understand William Friedkin’s 1990 movie The Guardian was an inspiration.

I was looking for another project after Backcountry, and just to pass the time I read William Friedkin’s biography. And I forgot that he had done The Guardian. I saw the movie again and I heard the word ‘Pyewacket.’ I remember how powerful that was when I first saw it.

Remind us in what context they use that name.

It’s when the nanny takes Baby Jake for the first time, when she puts him to bed and says, “I have some friends for you.” And she has this stuffed owl: “This is Pyewacket!” (whispering). And she puts it in his crib, and I went, “Pyewacketttttttt! That’s my next movie!”

Tell me about your researches for the film.

Well, in [the 1968 film] Witchfinder General, Matthew Hopkins in Essex, England, found a coven of witches, and he heard about the familiar spirits of Holt, Jarmara, and Pyewacket. But I used it in my own context. Here it isn’t a familiar spirit, but I decided to adopt the name because it’s a great name and also to make it the spirit that she evokes in the forest.

So the research I was doing after I had laid down that I went and researched a lot of black metal, accompanied by a lot of Wiccan, black magic, Left Hand Path books and knowledge and documentaries.

Talk about Leah’s ritual scene where she calls upon Pyewacket.

It was an amalgamation of a couple of different rituals. One was Drawing Down the Broom. And the other was a love ritual to make someone love you. But it deals with the string and it deals with the blood and milk and the herbs and stuff. Because it is a ritual and it happens in stages very clearly, so that’s what I did. It felt intimate, this young girl in the woods alone. How would it be for her with the knife? Because every ritual, really, has that knife.

I hope people get this because in the Left Hand Path, from the research I did, if you want to open the doorway for the demon, you carve a triangle in the floor, and that’s the doorway and you close it with a circle around you. And that’s what she does in the movie, and people are like “why a triangle? What is she doing?” That’s it. And then everybody on set was really scared that it was a real ritual, and I had to tell them “no, it’s not.” So people who really know this stuff I hope they say the beats are right, and according to the books it feels like a real one for sure; intimate. But is it a real, real, real one where I can go “that’s that ritual”? No.

Leah does magic to exert control in a situation where she feels she has no control. Would you agree?

You nailed it. She’s so full of teenage angst. Her mother moves her away; wants her to transfer high schools. And some of that is taken from my own life so I can know that feeling.

You should write what you know. Very different scenario obviously. My mother moved up north with me my last couple years of high school. I didn’t want to go, but we worked it out. It was a lot better than that was. She drove me up and down for awhile; she worked there as well. But she was pregnant so she had to stop that, so I lived with my friend’s family for the rest of the year. It worked out. I didn’t do black magic, but there was that angst: “I don’t want to move, I don’t want to transfer schools.” You use that to personalize it so you can feel it.

The relationship between Leah and her mother feels real. How important was it to make that relationship authentic in order to amplify the ending’s horror?

It’s the same thing I tried to do in Backcountry, too, to weave into the narrative a real understanding of who these people are. We can identify with them, we feel like it’s a real relationship.

So we’ve earned where we’re going to go. It’s not just the event that happens to the mom at the end of the film – “oh, now I’m satisfied” – as opposed to the deeper “now I know these people,” and watching them now go through this, that means so much more.

I really, really dove in and thought and put myself in that situation. Derek Cianfrance who did Blue Valentine is still one of my favourite directors; he does not shy away from making it as real as possible. And I thought, “Make the relationship authentic.” Like, I want a girl who’s 16-years-old girl to watch this and think “I know exactly how Leah feels.” 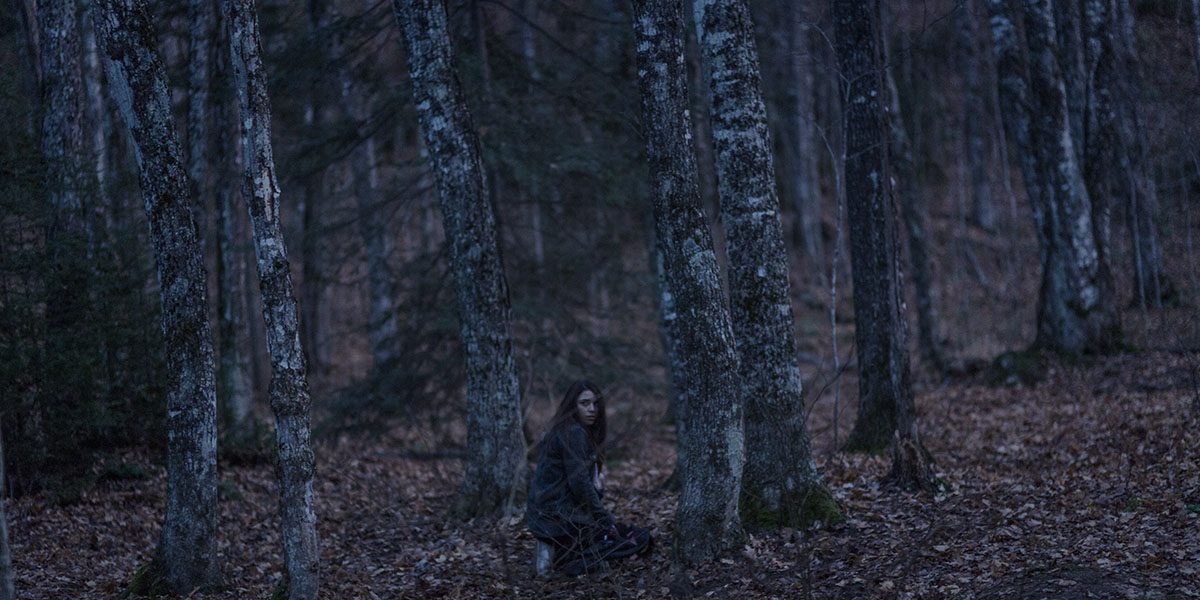 Pyewacket could be the new Craft.

Absolutely! “I believe her, I know her.” So we believe all the horror that comes. So if you believe them you’re more prone to believe the more horrific elements as well.

Absolutely. Black metal! We have some of them in it, like the band Carach Angren. The patch on her back is authentic black metal.

Talk about the influence of music in the film.

Huge influence. I was thinking I want to go as authentic as possible. So her backpack was going to be her iconic thing in the movie. I was trying to think of bands that are not so on-the-nose Goth, but she’s out there a little bit more. So loves Carach Angren. She loves Interpol who have a slight Goth element. HIM of course, and the heart-o-gram is on her backpack. And Ministry is on her backpack, which people who are into Goth would probably appreciate that because they have a fucking dark tone to them. The broken hands with the arrow is from a band called I Killed the Prom Queen who are a thrash metal/screamo-style band. Not Goth, but with the angst and anger.

So I didn’t want it to be like the director and the production designer did some research and put a bunch of the same kind of metal bands where I wanted it to be more eclectic, and that was important to me.

Lee Malia from the band Bring Me the Horizon provides the score. Talk about working with him.

I was listening to Bring Me the Horizon on the set of Backcountry and I came across ‘Memorial,’ which is a song on one of their albums, and it was so cinematic. And then I found out he wrote that song and thought, “He has such talent, maybe he can do a soundtrack.” [Ed. note – ‘Memorial’ ended up on the Backcountry soundtrack.]

So when Backcountry came out he followed me on Twitter. And I wrote him a private message saying “Thanks for the song, blah blah blah.” And I asked, “Have you ever thought of composing a soundtrack” “I’d love to do that.” That’s how it started.

But then when we got together he was cool. He was really great to work with. He was in Sheffield so our time zones were always different. But the last song in the movie, I said, “Think of ‘Orion’ by Metallica and make it your own,” and he just pulled out that song and I was just incredible.

Dancer Bianca Melchior plays the demon Pyewacket. Our glimpses of Pyewacket are brief and unclear. Talk about your approach to showing the demon.

I want it to feel unpredictable and shape-shift a bit. You’re not too sure. You can’t pinpoint it.

Some people have noticed that when she breaks down the door she takes the vague shape of the mother, then takes the shape of a black metal [musician] or something. It’s because of the patch on Leah’s bag. If you look at the patch on the bag it looks like the face in the window. And I really wanted to use that element of black metal as almost like an homage.

The horror, yeah, I just really wanted it to be dreadful. But the horror, when it does go, when Pyewacket comes out of the window then crawls out and does some weird stuff, that’s all Bianca. She did some fucking weird shit. Because I was thinking “what’s my nightmare?” Not to see it in close-up, to be where Leah is. And this weird thing, you hear it. It comes out like a weird feeling: “What the hell is that?!” So when the horror does spike, hopefully you feel it.

You shot much of the film in northern Ontario, like Backcountry. Talk about the power of the woods.

I find woods to be the most beautiful environment, and the most dangerous and the most dark. I used to live up north and walk into the woods where it’s sunset. It’s beautiful, it’s ethereal, it’s magical, fantastical, and it’s alive.

But then it hits dusk and all of a sudden it’s like talking to someone and then their personality changes right in front of you. It’s spooky, man. Then the shadows come in and the sound changes. It’s got such personality, and I think it’s the closest we can get to a god or gods is in the woods.

(laughs) Unless that’s your god. 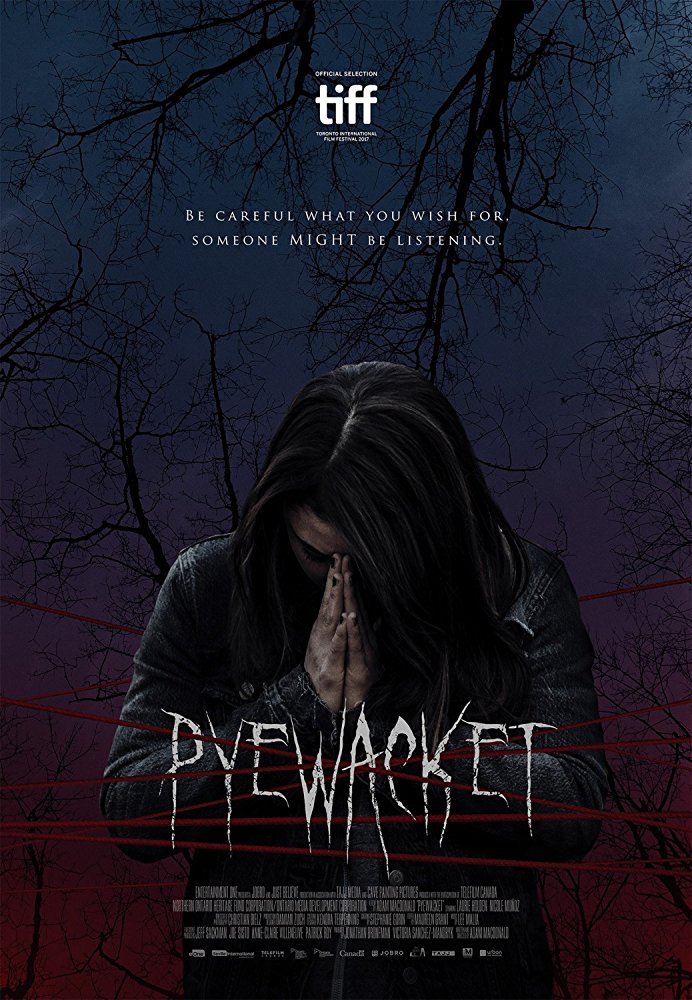