For the past eight years, Glass Eye Pix topper Larry Fessenden (DEPRAVED, WENDIGO) and filmmaker Glenn McQuaid (I SELL THE DEAD) have been creating fear for your ears with the horror audio anthology TALES FROM BEYOND THE PALE. Today, they’ve launched the series as a free podcast, and RUE MORGUE spoke with them about the project.

The TALES podcast, which you can check out here, begins with a new aural terror tale, “Reappraisal,” which McQuaid wrote and directed with Fessenden playing a mysterious stranger attempting to buy a property from an unstable seller played by author/TALES contributor Clay McLeod Chapman. Next week, on October 17, Fessenden’s “In the Wind,” a snowbound saga of flying monsters attacking a tram car (“I call it FARGO meets THE MIST,” Fessenden says), will premiere; both were recorded live at the Overlook Film Festival in 2016. 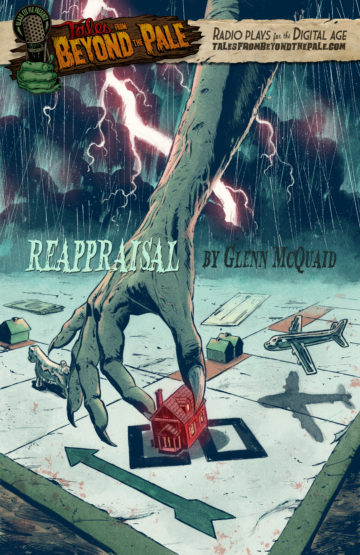 Further down the line are a pair recorded at New York City’s Lincoln Center last year (pictured above): Fessenden’s metaphorical werewolf story “Blackout” and McQuaid’s “Die Sleeping, My Sweet,” about dark secrets extracted from the mind of a comatose patient. “That one,” McQuaid says, “is essentially the third in a TALES trilogy inspired by EC’s CRIME SUSPENSTORIES comics—the first one being ‘The Crush,’ and the second being ‘The Ripple at Cedar Lake.’ ” The podcast will also showcase TALES from the archives written and directed by a wide spectrum of talents, such as Stuart Gordon, Eric Red (THE HITCHER), Graham Reznick (I CAN SEE YOU), Paul Solet (GRACE), Jeff Buhler (PET SEMATARY, THE MIDNIGHT MEAT TRAIN), Ashley Thorpe (BORLEY RECTORY) and authors Sarah Langan and April Snellings.

Fessenden has enjoyed his frequent acting turns in TALES, particularly when McQuaid is the one guiding him. “Glenn often gives me a role,” he says, “and we have a great relationship when he’s directing me. I remember that only during the rehearsal that day, which is very much the nature of TALES, did I hook into something—and quite honestly, I was channeling Angus Scrimm. I think you can feel that when you listen to it.”

Throughout TALES’ history, the duo have sought to expand the audio-drama form beyond preconceived parameters. “Very often, the advice is: Keep the production small, since an audience can’t really perceive of more than four lead characters in an audio environment. And we just laugh at them! We’re always pushing the envelope.” McQuaid seconds, “In a way, it’s still a fairly conservative format to this day. There are an awful lot of people out there doing old-time radio-show kinds of work, which is great, but it’s almost as if filmmakers never moved on from the silent era, you know? With audio drama, you can be as experimental as you want, and say things that weren’t on anyone’s lips back in the old days.”