Documentary Review: Discover The International Bigfoot In “SASQUATCH AMONG THE WILDMEN”

To the uneducated viewer in the realm of Bigfoot sighting authentication, it may be surprising learn just how many scientists and groups of explorers have dedicated their professional lives to proving the existence of ‘Wildmen.’ As Dr. Jeffrey Meldrum asserts in Darcy Weir’s SASQUATCH AMONG THE WILDMEN, there may be over 5 Bigfoot incarnations across the globe, including the Russian Alma, Middle Eastern Dev, and Chinese Yeren, not to mention the North American Sasquatch and Arctic Yeti. What is most interesting, however, are the similarities between these different sightings and the evidence gathered by international witnesses.

The iconic Wildman footprint is certainly Meldrum’s most compelling piece of evidence, as massive footprints with the same anatomical anomalies have been discovered all over the world. Weir attempts to authenticate these claims by interviewing witnesses from China and the United States, including both laymen and Bigfoot professionals. Supplemented by eyewitness videos, reenactments, and excerpts from news specials, SASQUATCH AMONG THE WILDMEN creates a compelling case for the existence of proto-humanoid beings haunting our forests, mountains, and most remote corners of the world. 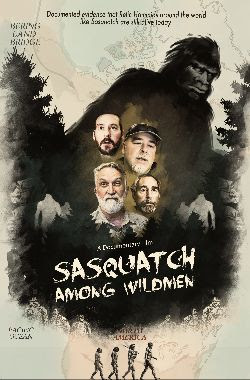 SASQUATCH AMONG THE WILDMEN also dives into the ancient folklore that provides a historical basis for the believers’ theories. What is perhaps most interesting about the Bigfoot tale, is that similar stories and beliefs have cropped up in almost every culture on the face of the earth. There is an almost universal preoccupation with the potential existence of a being that violates the human-animal binary, a literal Wild Man. All peoples seem to have the same questions about what humanity would really mean if such a creature were to exist.

The documentarians even visit a Sasquatch Summit in the Pacific Northwest, a convention for witnesses and scientists alike to compare experiences and evidence. Comparisons of Wildmen’s gait, vocalizations, footprints, and more are made by these attendees, who hope to convince the world of Sasquatch’s legitimacy. There is no doubt that the evidence is compelling. Particularly, the video of the black-furred Dev baring its teeth at the camera is sure to send a chill down any viewer’s spine. SASQUATCH AMONG THE WILDMEN was released today (Nov. 10) on DVD and VOD, and is sure to tingle the senses of any conspiracy theory or cryptid enthusiast.