Two years into the pandemic, a group of friends throw an online party with a night of games, drinking and drugs. After taking an ecstasy pill, things go terribly wrong and the safety of their home becomes more terrifying than the raging chaos outside. SAFER AT HOME shows the risk of personal disaster in the middle of a COVID-like outbreak through a group video chat. Though its tension and character action are shaped by the world we currently live in, some of those elements have proven to be prophetic, rather than intended. Will Wernick, director and co-writer of SAFER AT HOME, spoke to us about the inception and production of the thriller.

What inspired the development of SAFER AT HOME?

Back in the beginning of 2020, we were all in the same situation, Los Angeles maybe more so than some other places. I had started talking to one of the other producers, John Ierardi, about potential vehicles that could be shot during that time. The idea blossomed from there. We put together a pitch on it, and then I went to visit family in Colorado. We presented it to Voltage [Pictures] and it started going immediately. It came out of being locked in with a very small group of friends, seeing the world crumbling around them.

How was the process of filming this work? Were you all distanced?

Two interesting things about the film: one, we wrote it before a lot of this happened. A lot of the things that were written, like some of the police stuff and the protest stuff, hadn’t happened yet. It was strange to start seeing it happen as we started filming. The film was shot distanced, mostly in actor’s homes. We had cameras shipped in to them and lighting gear set up for them. Everything was linked together with satellite time codes so that they could act in sync with each other. The output from the camera was actually piped into Zoom, so they were actually referencing each other via Zoom. It was sort of like a play. We would do super long takes. It was kind of Wild West. Secondly, no one had filmed yet. We were the first SAG/DGA film to go in Los Angeles. We had to prepare safety manuals and all that stuff for SAG. One of our producers, Bo Youngblood, put together stuff for the CDC and for SAG. But we were kind of making it up as we went along because it hadn’t been done yet.

You don’t usually need to involve the CDC in film productions, do you?

I personally have never had to do that! It was an interesting process casting it too. We wanted to cast people we already knew. A few friends got in, really loved the script, but then dropped out because they just didn’t want to think about the concept while it was going on outside. We ended up finding a really cool cast.

The cast really does feel like a group of old friends.

We got them together as early as possible, especially the ones that are sitting together in the film. We had some “breaking the ice” meetings. They are all really good actors. I had worked with Dan Johnson before. They ended up feeling like a cozy group of friends.

How did you make predictions about the future in SAFER AT HOME? It takes place slightly in the future, after the outbreak.

I think there is a subtle, or not so subtle, undertone in the film that makes the comment on how we thought the country was going at the time. Which was not well at all. We didn’t want to over-sensationalize it. You see a lot of attempts at making this a hyper-real action type of thing, but I don’t think that is the right way to go. We tried to be respectful of the mindset everyone was in while still making something that was exciting and still slightly heightened. It was really important to us that we didn’t over-sensationalize what was happening, and I don’t think it needed to be. It was already pretty sensational.

Our times are horrifying enough.

They really are, aren’t they? 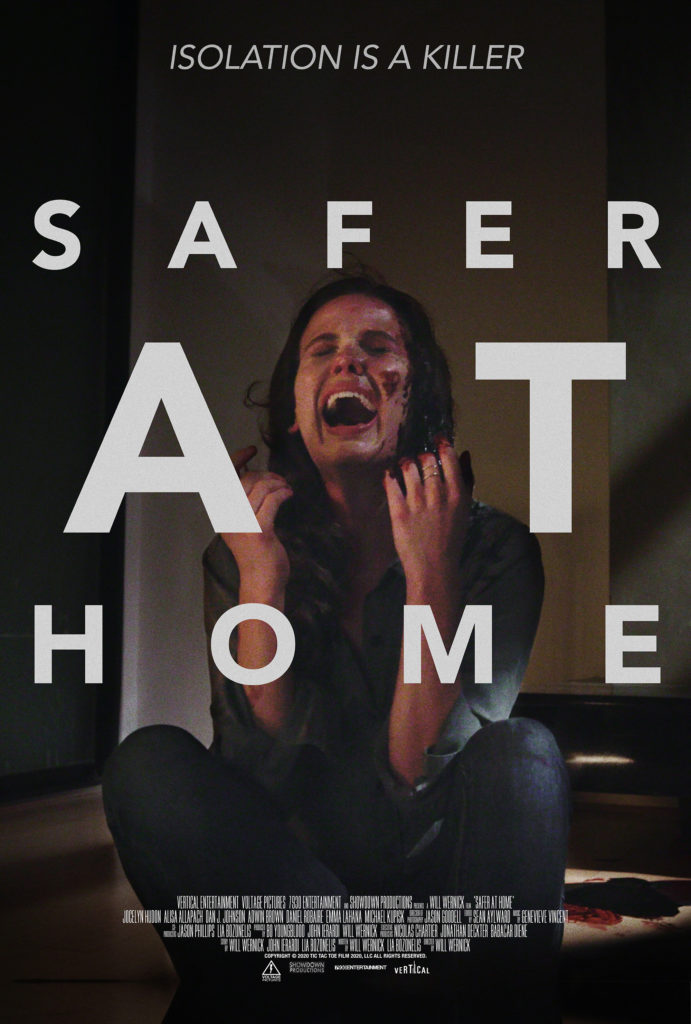 Were there any unforeseen production issues you encountered while doing the distanced shoot?

The biggest thing, as the director, was the way we were set up, I could not talk to any [single] actor one-on-one. They all had earpieces so that we could get clean audio, but when I was giving them notes, everyone could hear them. This radically changed how I delivered notes. I never want to do anything like this again because I love being on set and in the room. That’s half the fun of filmmaking, collaborating together. While the distanced thing made it possible, it made it much harder.

Do you think that helped bond the actors as a group?

I think it helped bond them together, but at the same time, they had to have pretty thick skin. If you are telling someone to try something new or improve and everyone can hear it, you need to get to speed pretty quickly. They all stepped up pretty well.

We all love going to the movies, but I think “screen life” films are often better watched on computers, and that’s getting much more common these days. Did you put consideration into the mode of consumption for SAFER AT HOME?

I’ve worked with the same director of photography [Jason Goodell] on the three features I’ve made. One of the big things we talked about early on with this was not shooting it like Zoom. In a screen life movie, they try to make it feel like a screen. We wanted to make it feel cinematic, like a [god’s-eye]-view from the device. So it is very intentionally lit. We are shooting with a depth of field so the characters are isolated more. The film actually came out in theaters. We wanted it technically to hold up on big screens. We wanted everything to look stable and clean. It is a dark film, but we wanted everything to be perceptible. It would be a very different movie if watched on a laptop or phone. I’m grateful it is getting a theatrical release, even if I haven’t been to the theater in a year.

I miss going to the movies so much.

It is really different! Especially thrillers and horror. I wouldn’t call this a horror movie, necessarily. But if you can’t get up easily and you can’t talk to your friend easily, horror and thrillers become much more effective. It is why they have stood the test of time theatrically, and I think they will continue to.

What do you hope viewers take away from SAFER AT HOME?

It’s something of a cautionary tale. It is interesting seeing it come out after the election happened, and we have a suddenly pretty different environment. It is possible that these things last a long time, we really have to check our mental health and our relationships. We wanted to keep that subtle but it is there.
And then there is the political message, It is strange to sit back and watch all of this stuff unfold. Hopefully, we now have people at the top who are doing a better job controlling it. There is a bit of a feeling of helplessness in the distance. You can see family and friends, but you can’t physically be there if they need you. I know people who have gone through breakups of major relationships over Zoom. Or started relationships over Zoom. It is so disconnected, but it actually is happening to you. We thought it would be a good fit to do a movie about it.

SAFER AT HOME is available now in select theaters and on VOD and Digital from Vertical Entertainment.