PHOBIAS is an anthology horror film with a cast that includes Alexis Knapp (Pitch Perfect) and Macy Gray (Domino). Writer, director, producer, and actress Jess Varley brought her macabre imagination to the mix. As the title implies, PHOBIAS very much centers its five stories on specific extreme fears. The patients suffering from these deficiencies find themselves in further trouble as they are held captive at a government facility. Each segment is a brutal exploration of phobias like hoplophobia (fear of weapons), vehophobia (fear of cars), and robophobia (fear of robots). Varley directs “Outpost 37,” the government facility sequences and connective tissue of the film. She also directed the segment called “Atelophobia” about the fear of imperfection which stars Macy Gray in an unforgettable role. Varley sat down with us to discuss her career and the development of PHOBIAS.

When did you first get involved in the arts?

Pretty early on. I signed and started working in the industry when I was 15 or 16. Even before that, I’d done community theatre, a lot of musical theatre, and when I went to Laguardia [High School], I had all these great acting teachers for the first time. It opened up my mind to this whole world beyond musical theatre. I’ve always loved the arts. I’ve always loved the industry, and it has so many kinds of jobs. You don’t have to stick to one the whole way through. It’s such a diverse world!

What inspired your move to Los Angeles, and where did it lead?

It was something that NYU pushed us to do, to make our own material. So, I moved out to LA about seven years ago to do that. Meeting Eric Fleischman of Defiant Studios encouraged me to try horror and get behind the camera. It started with me doing a short film [Mother] that then was the material that helped me make PHOBIAS.

How important was making Mother to your development as an artist?

For me, that was a pivotal moment. Putting it all together, raising the money, being on a set for the first time truly behind the camera working in something so heavily genre, I instantly fell in love. I felt like it was more connected to my purpose. I love directing so much. I love working with all the department heads and everyone involved in the process. I love writing so much too, but that’s much more of a solitary activity for the most part, and I’m very social.

What is it about directing that excites you the most?

The magic of getting to collaborate with so many talented people. When I was acting, I had to pocket many things that I loved because they do not apply to the job. But with directing, I get to work with a composer, talented actors, and all of these incredible people who are experts in what they do. I love the collaborative aspect of it; it’s fulfilling to me.

How did you initially get involved with PHOBIAS?

PHOBIAS started with Radio Silence, who we were very fortunate to have as producers. They did Ready or Not and tons of franchises in the past like V/H/S. They were the anthology kings. Now they’re doing Scream 5! They’re incredible. We went to filmmakers we loved to ask if they wanted to be a part of it. We had them choose a phobia or group of phobias that genuinely speaks to them personally. We curated that list so that there weren’t any that were too similar, and they would balance each other out.

What words of advice did Radio Silence offer?

Radio Silence’s advice was to make the film feel as cohesive as possible so that it didn’t feel like this collection of five different short films. Even though we have this diverse array of perspectives, we wanted the audience to think it was all done by one person. We used the same lenses, the same crew; we used everything the same so that the movie would feel cohesive. It’s something we worked on so that it all could feel like it exists in the same world. We did our best, and I think it paid off. 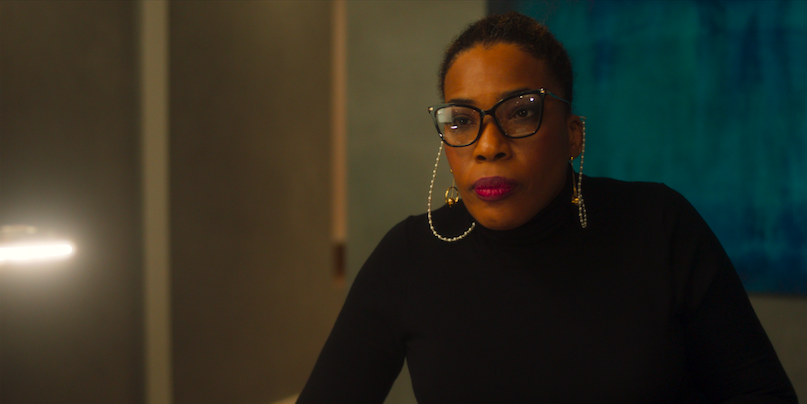 Am I crazy to think PHOBIAS feels like it could be a part of the pseudo-science universe of films like Get Out?

I’m the hugest Jordan Peele fan. Hearing you say that is the ultimate…I can die happy! I don’t know if we were aware we were doing that, but I could see that parallel.

What’s you personal connection to “Atelophobia?”

Atelophobia was kind of me exploring the fear of imperfection. To me, it’s the dark side of perfectionism, the fear of not being enough or having body dysmorphia or eating disorders. Things that I struggled with in the past and trying to work through some of those things in the segment.

Does working in a male-dominated industry further complicate that fear?

There are only so many women working in the horror genre, especially in indie films. “If I only have this, then maybe they’ll consider me along with the guys.” All of these kinds of things make me feel like I have to be an overachiever to have value. I think, in some ways, maybe it’s a uniquely female anxiety, but it’s certainly relatable to all people.

How does horror help process that anxiety?

[Those] feelings aren’t true. So, maybe cracking them open will help dispel them. My hope in exploring a subject like atelophobia is to help other people feel less alone. Take a look at it within the lens of horror to bring light to it and help people overcome or aid those anxieties. [Through] filmmaking and being able to talk about it and share it, we realize we’re not alone in those struggles. That makes me feel good to be able to connect with people and the dark insides of ourselves. The things we keep private, our most private insecurities and struggles, and bringing them out into the light and make people feel less alone.

All hail Macy Gray! She’s the best. She crushed it so much. I’m so excited for audiences to see her in this role. It’s certainly something I don’t think anybody’s ever seen her in before. I’m grateful for the fact that she trusted me enough to go all the way. She gave the most dynamic, complex, relatable performance. She’s so amazing on screen. She has such an incredible presence. She has these tiny things she’ll do that are so much fun to watch on camera. It’s so dynamic. She came in with a bunch of ideas and was committed to it. We wanted to show her to people in a way they’ve never seen. My dream would be for Macy to get her movie where she gets to be this incredible villain. I feel like audiences are going to empathize with her position, which makes for a great villain.