Director and cast talk “THE NEW MUTANTS,” the scarier side of the Marvel Universe

The first Marvel superhero adventure that is also described as a horror film, THE NEW MUTANTS opens this Friday after delays of a few years, into an uncertain theatrical environment. Yet director Josh Boone and his young stars remain committed to the movie, and its vision of five young people with unusual powers who exist adjacent to the celebrated X-Men.

Scripted by Boone and Knate Lee, THE NEW MUTANTS is based on the X-MEN spinoff series written by Chris Claremont, specifically a run illustrated by Bill Sienkiewicz. Boone and Lee are lifelong friends and comics fans, and the director says, “I still remember vividly to this day seeing the covers of the NEW MUTANTS comics when Bill started working on the ‘Demon Bear’ series, because they did not look like any comic-book covers I had every seen before. They were painted, they were impressionistic, they had a more slippery, surreal look than typical comics do. I’d never seen anything like that before, so they really captured my imagination, and I thought about them for years. When I first moved out to LA, in my apartment 10 years before I ever made a movie, I had a stack of NEW MUTANTS comics, and I was like, ‘Maybe one day…’ ”

Boone’s success with a very different kind of youth drama, the teen romance THE FAULT IN OUR STARS, gave him the wherewithal to make that dream a reality. “We went to Fox and begged them to let us take a crack at these comics we liked when we were young. Almost all the projects I do go back to my childhood, or to things I feel real passion and love for, because that’s really all that can sustain you through how long it takes to make something—get it made, write it, shoot it, edit it.”​ 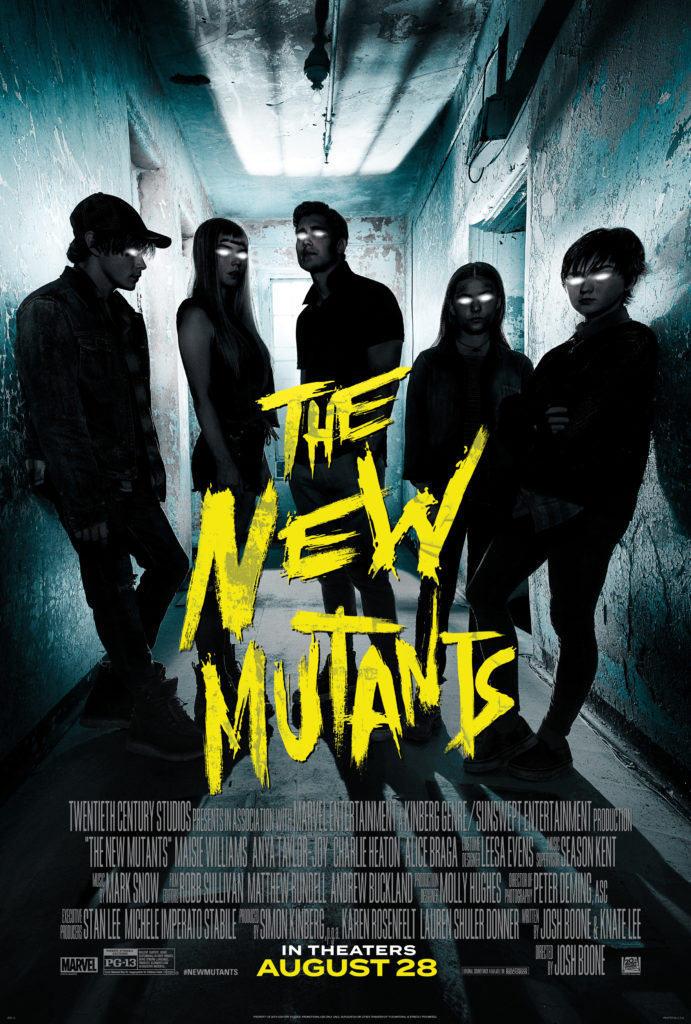 The storyline he and Lee scripted takes its inspiration from that “Demon Bear” narrative, in which Native American teenager Dani Moonstar wrestles with both real and inner demons. In the film, Dani (Blu Hunt) is brought to an isolated facility where four other teen mutants are being held for study and training in how to control their abilities: Rahne Sinclair (GAME OF THRONES’ Maisie Williams), Illyana Rasputin (THE WITCH and SPLIT’s Anya Taylor-Joy), Sam Guthrie (Charlie Heaton from STRANGER THINGS) and Roberto da Costa (Henry Zaga), overseen by Dr. Cecilia Reyes (Alice Braga). When supernatural forces invade the hospital, the patients have to harness and unite their powers in order to stay alive.

In adapting the comics, Boone says, he and Lee made sure to stay true to the source while assuring the elements would work in a different medium. “We used everybody’s original backstories from the comics,” he notes, “but we went out of our way to ground those stories and make them directly related to where the characters are emotionally when you’re with them in the movie. The comic only goes so far; it was incredibly helpful to us aesthetically, and in terms of choosing shots and making it look a certain way. Those comics were cool, because the characters didn’t wear costumes in them for a lot of Bill’s run, which we were inspired by as well.”

To give THE NEW MUTANTS the proper horrific veneer, Boone, cinematographer Peter Deming (whose credits range from EVIL DEAD II to THE CABIN IN THE WOODS) and their team shot most of the movie at an abandoned psychiatric hospital in Massachusetts. “Filming there really helped us get the feeling of the reality of it,” Braga recalls, “having the actual walls and actual energy. It felt, in a way, like we were doing an independent film, because we were on locations, so it wasn’t only bluescreens. And filming at night was kind of scary; I wouldn’t walk by myself.”

She wasn’t alone in that trepidation, Boone reveals: “There were several crewmembers who had weird experiences there, and had to be walked to their cars at night because they were scared to walk there by themselves after they’d been in the buildings all day. People definitely had weird encounters.” Adds Zaga, “The groundskeeper who’d worked there for years had some really awful stories to tell us, why we shouldn’t walk around alone at night.”

“I remember him putting his arm around me,” Boone continues, “and saying, ‘See that basketball court over there?’ ‘Yeah.’ ‘You know, the state made that for Little Jimmy when he came here.’ I was like, ‘Aw, they made it for a kid, that’s so sweet,’ and he said, ‘He stabbed his family.’ I remember in the attic where we shot the first day, that was a place where somebody had hanged themselves, they said. It might have even been more than one person, because the place was 150 years old.”

Taylor-Joy, already a genre veteran, didn’t have the same concerns while shooting there. “I’ve shot in too many abandoned mental hospitals now; I’m really way too chill about the whole situation,” she laughs. She adds that shooting in the hospital’s confines helped her bond with her co-stars: “It did feel like we were in a high school/college experience, where we were all going to the same place every single day, and then going back to ‘dorms.’ ” 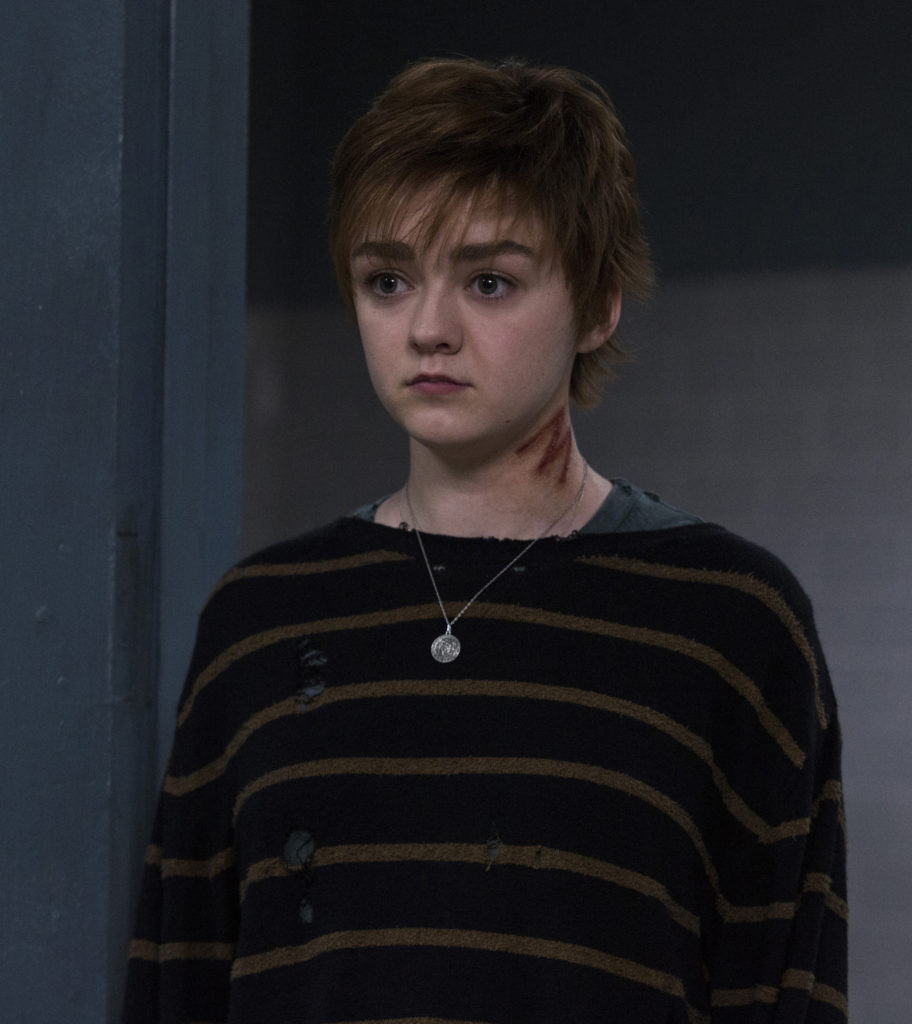 Beyond the supernatural/fantastical themes, THE NEW MUTANTS is, at its core, about young people who have been deemed as “different” struggling with their identities. “We all came into this knowing that while we were making a superhero movie, we weren’t really making a superhero movie,” Taylor-Joy says. “We were making a film about people who are having a tough time understanding themselves and figuring out their places in the world. Adding powers makes it more cinematic, but I think any teenager who’s going through growing pains, trying to understand where they fit in—you’re no longer a child, but what is this weird adult world?—will definitely connect with it.”

“It’s really made for teenagers who are outsiders, who feel out of place and who are going through a tough time in general,” Boone seconds. “I’ve always said I make ‘couch movies’; when I was a teenager and I was really depressed, I’d have a certain movie I’d pop on and go lie on the couch and it made me feel better.”

Boone and the rest of the NEW MUTANTS team can certainly relax now that film is finally hitting screens, three years after it was shot. Rumors have swirled about the reasons for the delay, and about reshoots, and the director wants to put those to rest. “We reshot the movie four or five times, like every scene…no, I’m kidding. We never did reshoots. We were supposed to do them; movies in general do reshoots or pickups or things like that, but because of the merger [between 20th Century Fox, which produced the film, and Disney, which is now releasing it], once it was done, it was done. We never went back and did reshoots; we were always using the same footage and the same material, from the start of it all the way to the end of it.”

Boone, who also collaborated with Lee and Zaga on episodes of the new miniseries of Stephen King’s THE STAND that premieres in December, believes that THE NEW MUTANTS’ concept of confined characters will resonate more today than ever. “That’s why the universe made this movie wait,” he jokes. “It’s because we needed to wait for a time when nobody could leave their houses. We made this about kids trapped inside this institution, and then Henry and I went and did a show about a pandemic, so I think we need to stop making things that could happen in real life! We need to go for full fantasy next time.”