Screenwriter Dennis Paoli On The Conception & Legacy of “Castle Freak”

The splendid career of screenwriter and playwright Dennis Paoli is highlighted by collaborations with the great Stuart Gordon, a partnership that began auspiciously at Gordon’s Organic Theater Company in Chicago in the late 1960s. The duo later collaborated on several ventures for Charles Band, crafting some of the most beloved titles on the Empire International Pictures/Full Moon roster. Their genre-defining (and defying) efforts span screen to stage, and include five remarkable feature films (Re-Animator, From Beyond, The Pit and the Pendulum, Castle Freak, Dagon), two standout episodes from Mick Garris’ acclaimed Masters of Horror series (Dreams in the Witch-House, The Black Cat), and a pair of uproarious theatrical forays (Bleacher Bums, Re-Animator: The Musical), that had fans clamoring for more.

1995’s CASTLE FREAK, the duo’s adaptation of Lovecraft’s dreary “The Outsider,” is one of the bleaker entries in Gordon’s oeuvre. He and Paoli took the original story’s spine – about a despairing ghoul rising from the depths of the crypt where he’s been abandoned only to be shunned by the bourgeois society he encounters on the surface – and expanded its scope, bringing in a fractured American family who inherit a remote Italian castle harboring terrible secrets and a legacy of abuse. The family’s transgressions are embodied in the hideously disfigured Giorgio (played by Jonathan Fuller), a monstrous wretch abandoned in the castle’s dungeon who breaks free to menace the clan now residing in his home. In CASTLE FREAK, Paoli and Gordon examine themes of isolation, distorted desire, generational guilt, and fleeting human connection in a modern-yet-gothic style. Mr. Paoli sat down with us on the eve of the film’s 25th anniversary to take a look back at its creation and reminisce about his fruitful working relationship with Gordon. 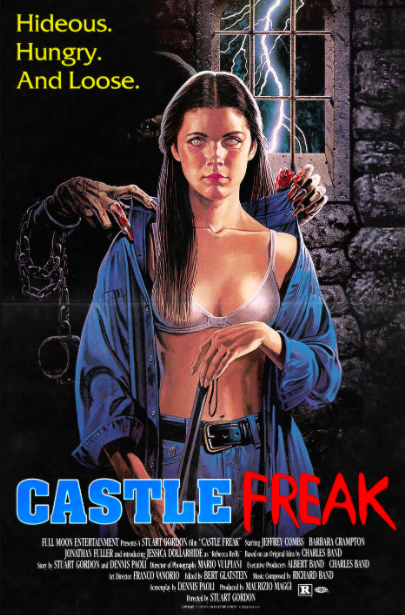 Your collaborations with Stuart Gordon often push sexual themes and visceral imagery into places that would undoubtedly bother the puerile Lovecraft. Were those decisions based on “selling the movie,” or were you and your co-writer actively subverting the stuffy author?

Yes, yes, and no. Lovecraft’s work is based profoundly on the dangers of sex, especially inter-species sex. The puerile are often the most sex-obsessed. If he weren’t so bothered by the possibility of sex with the monstrous and the ramifications of that act, his work wouldn’t bother us so. And as for visceral imagery, in film the visceral is visual, so we shined a light on, and pointed a camera at what his work implied must happen, must be.

The tone of CASTLE FREAK is more serious than in many of your other screen adaptations with Gordon. Do you think stripping away the dark humor helped the film? Were you trying to stay closer to the vibe of the short story?

Seriousness is what the story required, though there are “gags’ in the film (the cat being caught, a chair covered in a sheet “coming to life” as Giorgio, etc) which undercut [the] bourgeois, even Gothic, conventions. [That] is what humor does.

How did you arrive at the tortured character of Giorgio as your cinematic vision of the zombie or ghoul-like Outsider in the original short story?

Stuart was focused on the image of the Outsider seeing himself, discovering his true self, in the mirror. Giorgio isn’t a zombie; he’s the manifestation of familial dread and abuse. How did the character become the “outsider”? What were those awful “memories of childhood?” As with From Beyond, we followed the logic, and the illogic, of Lovecraft’s story to discover the larger tale. 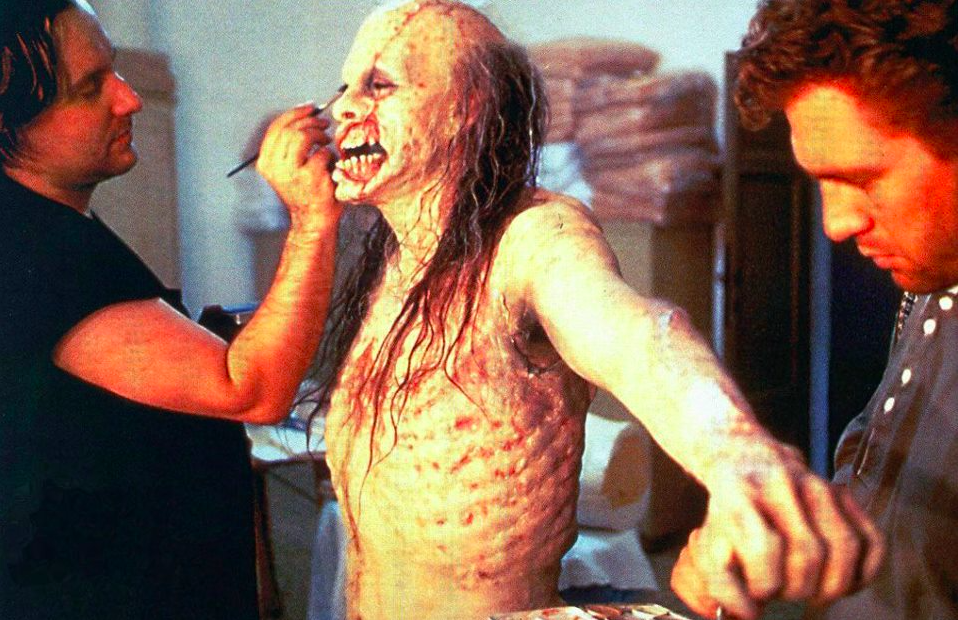 Did you and Mr. Gordon know the film would be shot at the Castle of Jupiter/Il Castello di Giove in Umbria prior to crafting the screenplay? Did its atmosphere influence the direction you took with the story?

Stuart knew the castle well, and I had visited. The settings fit the original story quite well, including the dungeon. Lovecraft is a master of atmosphere, and while we did not always in our adaptations strive to recreate the uncanny suggestiveness that characterizes his fiction, here was a better fit – a chance to get closer to the impressionism of his literary style.

The majority of HP Lovecraft’s writing explores the inevitability of death at the hands of something unspeakably monstrous. Can you discuss how this applies to the character of John Reilly (portrayed by Jeffrey Combs) in the film’s climax?

Stuart and I were interested in and inspired by Lovecraft’s work because it is so often “the monstrous” in the main characters that inevitably overwhelms them. John Reilly is overcome by his guilt, which reflects and represents the guilt of his family’s generations.

Had you and Mr. Gordon clashed over any of the story details, particularly its familial themes?

Again, much of Lovecraft’s fiction pre-supposes bizarre and disastrous familial relations. He ventured there often; he just rarely pulled the curtains all the way back. Stuart and I, in my recollection, didn’t clash at all in our collaboration on CASTLE FREAK. In fact, it was one of our most synergistic efforts together. The irony here is that Stuart was such a family man; his family was always the most important thing in his life. He was a dutiful and dedicated son, a faithful and entertaining husband, a fine and loving father. The demonic families we created in some of our works must have haunted him. 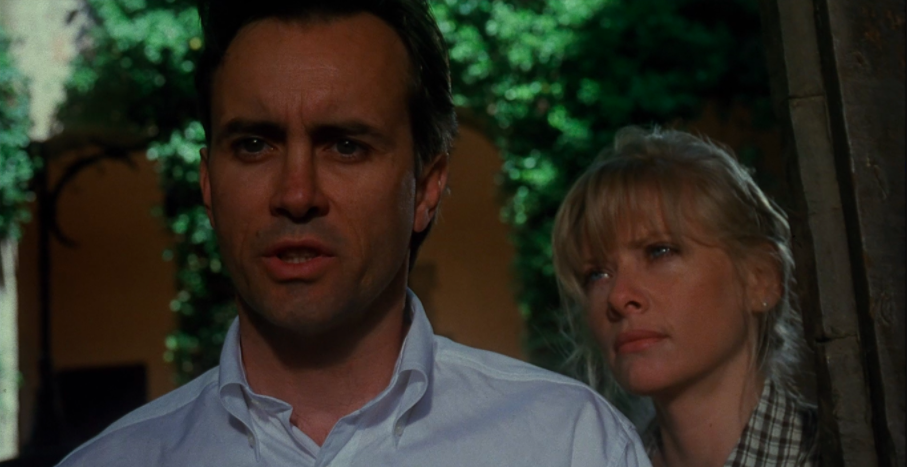 Looking back on the film 25 years later, how do you feel about it?

I haven’t seen it in awhile, but I’ve always been proud of it. I’m sure there are character turns we could have found if we’d had more time, but I’m not sure they would have made the film better.

Are there any moments from early drafts that were left out?

Most of that script got shot, so there was little that was discarded. But my screenplay dragged out the ending, which the shooting and editing made much shorter and stronger.

Do you have any involvement in the new version of CASTLE FREAK that’s being produced by Charles Band and directed by Tate Steinsiek?

No, I had no input on the new version, but I’m very flattered our film was reboot-worthy and attracted such young talent, and it’s always great to have a reason to congratulate good friends, Barbara Crampton and the maestro, Fabio Frizzi.

Congratulations on your impending retirement from academic life. Any plans to return to genre screenwriting? Speaking for fans around the world, we’d love to have more of your tremendous storytelling!

Yep, that’s the plan – to write off into the sunset!

“Stuart and I were interested in and inspired by Lovecraft’s work because it is so often ‘the monstrous’ in the main characters that inevitably overwhelms them.” 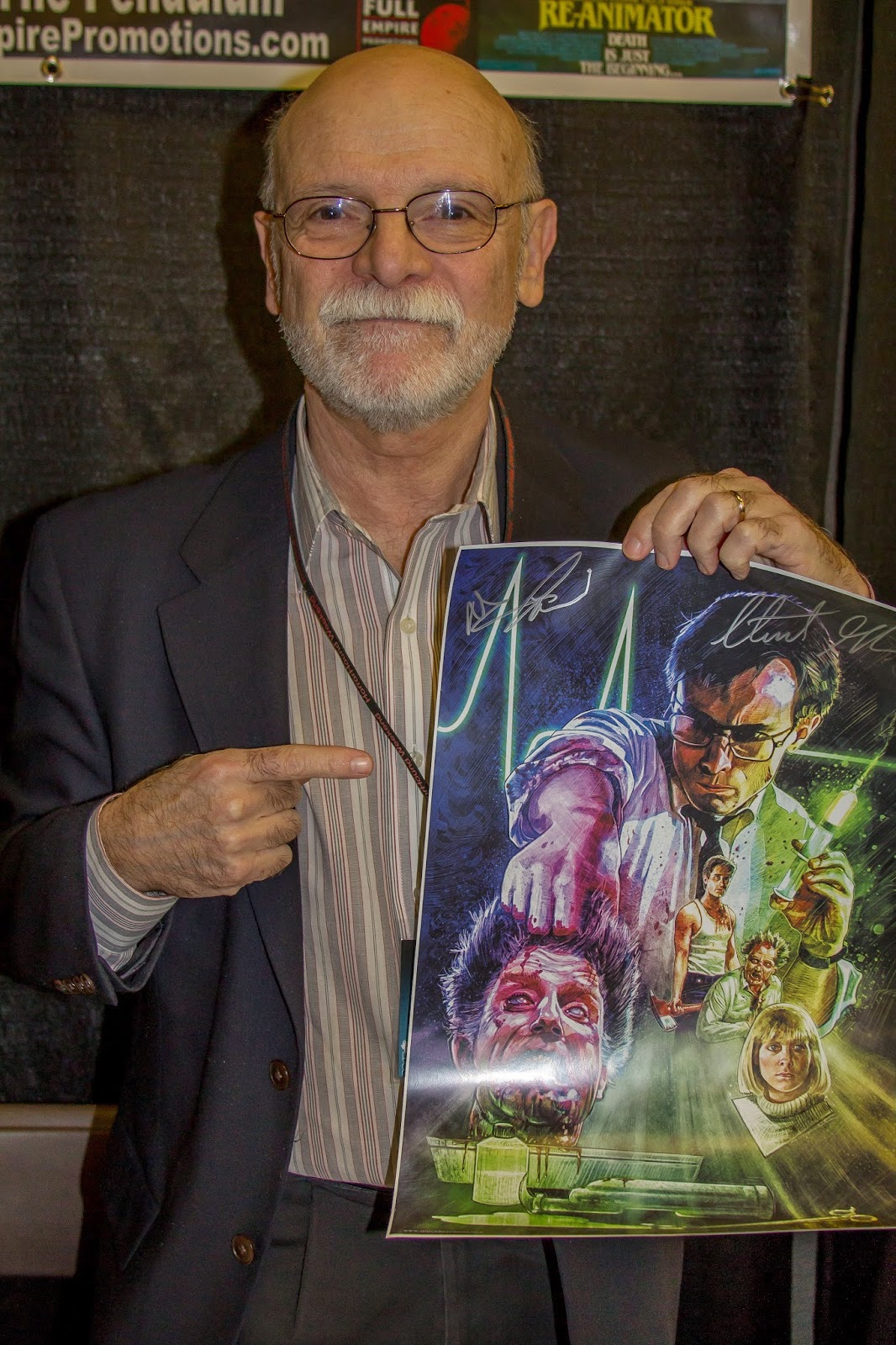