Regardless of all the good the internet can be used for, there’s a pretty fair chance that most of us will spend some portion of our tech-dependent lives looking at cat stuff. And why the hell not? Even the most hardened of horror fan can appreciate the rambunctious nature of our feline overlords – more so if there’s a way to infuse our love of the macabre into their mischievousness. Thankfully, Corvin Lüders loves cats and horror as much as the rest of us, so much so he’s created an entire line of cat-themed horror artwork he calls Creaturi Cats. Corvin carved out some time in his busy graphic design schedule to shed some light into his craft.

Give us some insight into the man that creates the creepy cats.

My name is Corvin and I live near Cologne, Germany. I studied graphic design and work as an illustrator. Creatively, I move between the media of movies and comics to create covers for CDs, DVDs, books, magazines, movie conventions and bands, as well as my own comics. Horror is not my only focus, but it is where I have the most fans. My latest comic, Teufels Küche – Devil’s Kitchen, created with American author Moaner T. Lawrence, was self-published and reviewed in Rue Morgue #101.

What led you to explore the notion of creating cat-themed horror art?

I wanted to paint a few new motifs for a horror convention, where I often exhibit. My first idea was to simply paint a zombie cat, but when I started to work with this subject, I suddenly had this title in my head: “Dawn of the Cat.” I wasn’t sure if that would be a good motif in realization, but when I was painting it, it made me laugh. That was a good sign, so after finishing it, I went straight to the next one: “Paws.”

You nail even the smallest of details with your posters, including famous taglines, quotes, and fictitious actors. How important is that to the design?

This is what defines the overall effect of my artwork. At first, it seems like a simple joke, but then the viewer notices that I’ve worked it out down to the very last detail. They then gradually discover a lot more. The posters are not simple and flat but well-thought-out works. Of course, my graphic design experience also helped me to realize the posters in this form.

Speak to your artistic stylings. What mediums do you prefer to work in?

I have painted with acrylics for a long time. A few years ago, I switched my way of working to digital painting. Very few customers want to buy an original anyway. In the end, the medium doesn’t matter – I create images. But the way of working is still the same: I design a motif – this is the most important process – then I sketch it out and paint it. During the painting process, things usually develop differently than planned, and that’s exciting for me.

From concept to creation, how long does it take to establish a new design?

This varies for each case. “The Catfather” did not take as long as “The Meowing.” Usually, it ranges between 1-3 days, once the idea is there. Depending on the subject, a picture can also be a lot of preliminary work. It took me 30 hours just for the layout of a Godzillla motif with extensive research, photoshoots with models, layout tests, and more. And I even worked 2-3 weeks on a poster for the horror punk band The Other until I managed to figure out all the details.

How, specifically, do you come up with the ideas for your posters? Are they based off of your favorite movies, or are they fan requested?

Most of the suggestions and requests I get from fans are unsuitable for this series. A large portion of the original motif has to fit to my personal requirements in order for me to create a parody poster for the Creaturi Cats series. For example, the movie’s name must be easy to satirize, and the motif must be able to be realized with a real cat that acts appropriately. On my posters, there are no mythical creatures doing things that otherwise only humans can do. They remain real cats – a blessing and a curse at times. 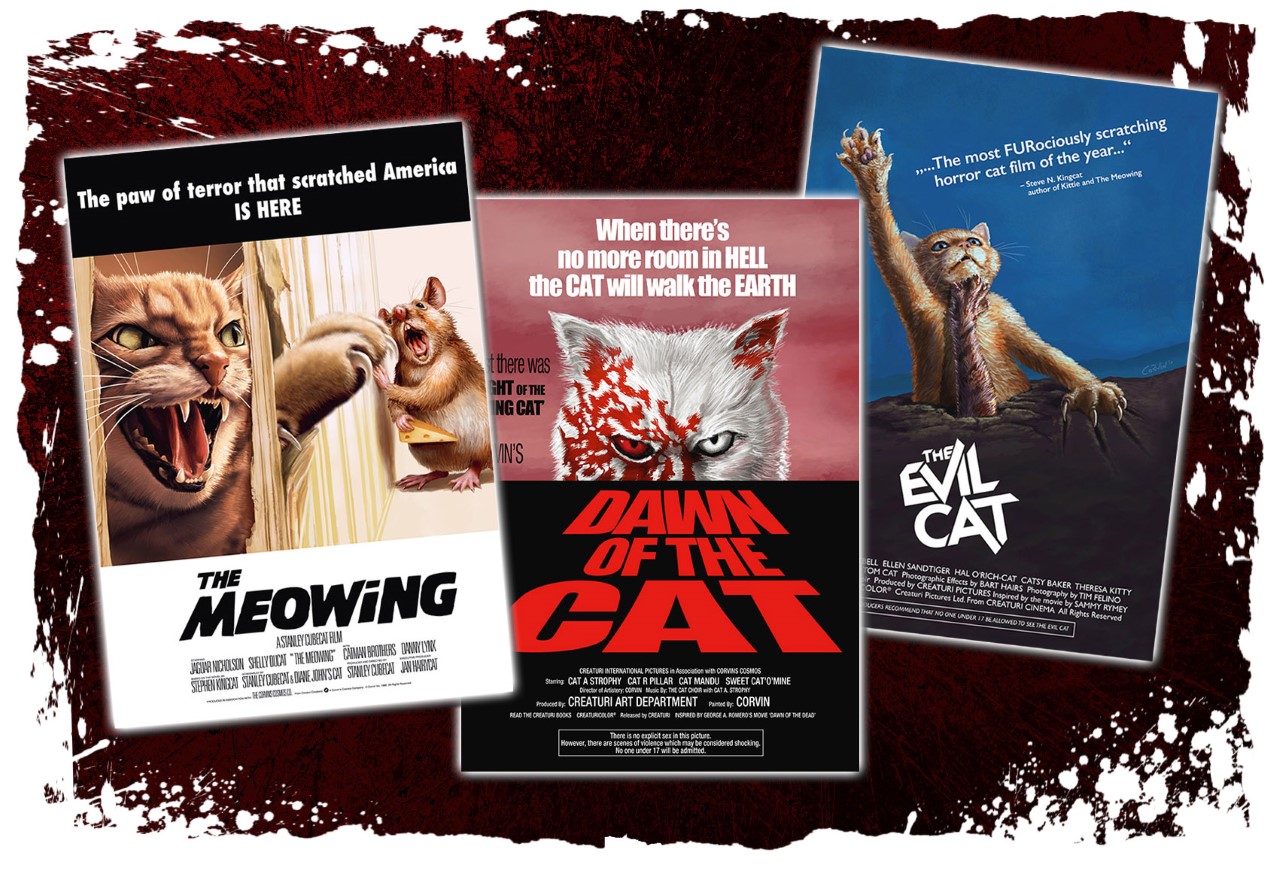 Has there ever been an image that you wanted to create, but for whatever reason, just couldn’t make it happen?

Yes, a lot! A Terminator cat, to name one. I don’t just put sunglasses on a cat and put a gun in its paw. That would be a flat joke and there are enough badly put together cat pictures on the Internet for that.

What are your most popular designs?

In general, horror fans in particular like my work. The cats are only part of my work. But among the cat posters, “Dawn of the Cat” is very popular, as well as “The Meowing,” “The Catfather,” and “Paws.” But the other motifs are hardly inferior to them in terms of popularity. It is really surprisingly balanced. I personally like my latest poster, “The Martian Cat,” very much at the moment. I like the cat’s expression. It was originally supposed to be funnier, but the determination suited the character of the movie better.

Do you happen to know if any of the actual cast or crew from any of the movies you’ve satirized have ever received any of your posters?

Yes! I often meet actors at comic and movie cons who really admire my paintings. I am always happy when actors whom I personally like are enthusiastic about my work, especially when they are creative people themselves, like Tom Savini or Clive Barker.

Do you have any upcoming projects you’re able to share details about?

There are still a few cat motifs planned, but I won’t reveal them beforehand. I don’t want to continue Creaturi Catsindefinitely because the series should stay as good as it is. But I am currently working on various other things. This also includes a new horror series that takes place in a “different” world – probably accompanied by a little art book or comic. I was also recently asked if I would like to create a gin bottle label, and I always enjoy doing cover designs.

For more information on Corvin Lüders and his artistry, head over to his online shop here.