The good folks of Cinepocalypse obviously appreciate irony, as they saw fit to host the world premiere of Lucky McKee’s new film, KINDRED SPIRITS on Father’s Day. Concerned as the director’s cinema is with bad parenting and the feminine perspective, it was impossible not to take note of the lack of a male presence in the onscreen household, and also note how little that lack of presence mattered. In 2019, it’s become unpopular for male directors to tell female stories, but McKee has always shown a deft and delicate hand with such material, long before “female-centric horror” was deemed worthy of buzz. KINDRED SPIRITS is a welcome return to form from the man who gave audiences one of horror’s finest character studies in MAY (2002) and took toxic, middle-class masculinity to brutal task—again, he was ahead of the curve—with THE WOMAN (2011).

KINDRED SPIRITS stars Thora Birch as Chloe, a single mother whose life is upended when her younger sister, Sadie (Caitlin Stasey) comes a-knocking. Though she claims to want to start over, settle down and be a good role model for her 17-year-old niece, Nicole (Sasha Frolova) who views her as an idealized, stand-in sister, Sadie has diabolical plans that threaten to sever the delicate bonds between mother and daughter. 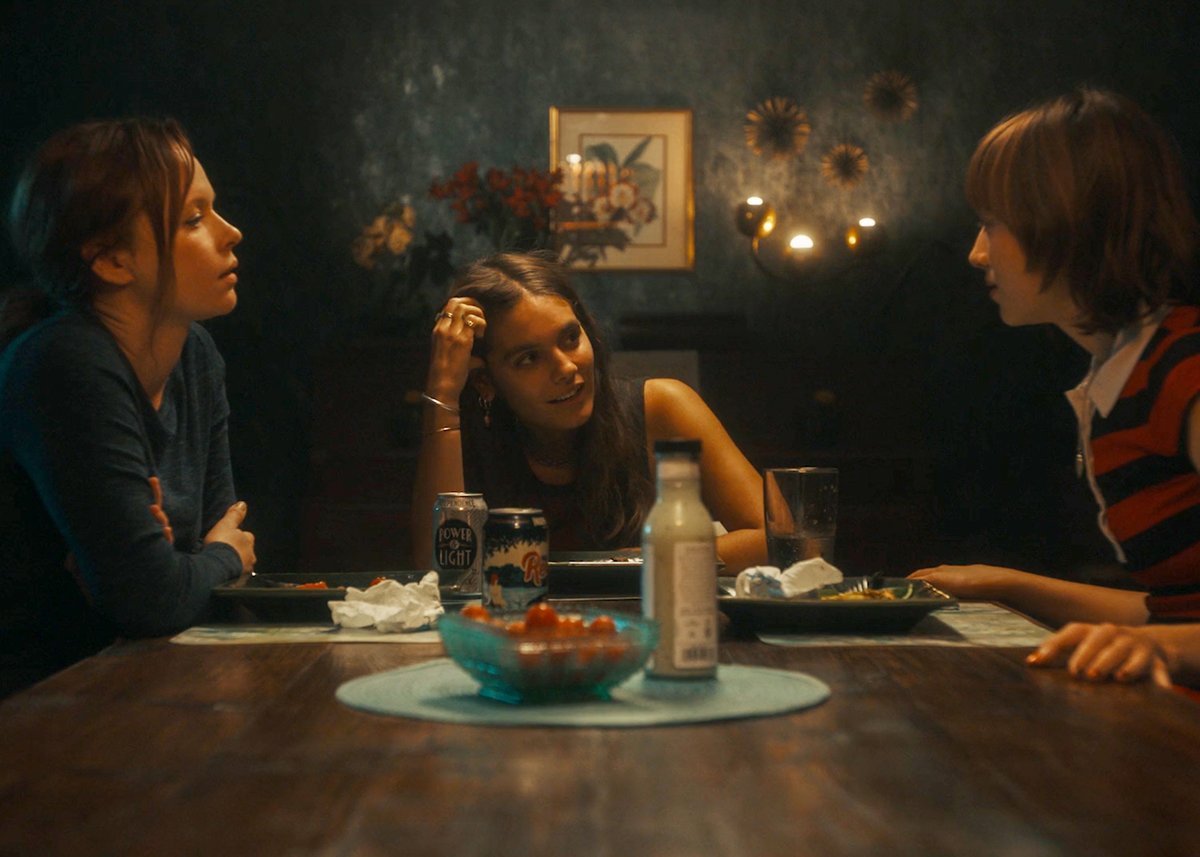 It’s a bit of a shock to find that the film was written by Chris Sivertson (scribe of 2007’s I KNOW WHO KILLED ME and McKee’s co-director on 2013’s ALL CHEERLEADERS DIE) when it feels so firmly in McKee’s wheelhouse. Grafting the 90s suspense film template onto a suburban setting (think SINGLE WHITE FEMALE meets Hitchcock’s SHADOW OF A DOUBT), KINDRED SPIRITS is the kind of material that could only work in the hands of accomplished actors, and the performances here are doozies. Birch (the Clinton-era “it” girl, who brings her own pop cultural baggage to the film) is perfection as the dreadfully young mom to Frolova’s blunt-banged, combat-boot-wearing, temperamental teen, Nicole. As cracked codependent, Sadie, Stasey’s performance is seriously revelatory; a baby-talking pit viper who always zags just when you expect her to zig. This is ultimately her movie, and she gives what is easily one of the most surprising, well-calibrated, and interesting character turns the genre will see this year.

Sivertson’s script erases the dividing lines between mother/daughter/sister/friend and lets the roles bleed into each other in a queasy exploration of fucked up parent-child dynamics. McKee, of course, has trod this path before, and has a firm handle on female relationships and viewpoints which helps keep KINDRED SPIRITS from falling into the easy “hysterical bitch” trap of the films it’s channeling. Indicative of this dedication to interiority is the photography of Chris Heinrich, who worked with McKee to light much of the film through prisms, crystals, and the refracted light of broken mirrors. This almost expressionistic style helps key us in to Sadie’s mental landscape, which is typified by the unreal softness of the images and informs the viewer on a subconscious level that something is very wrong onscreen, even during moments of humor and levity.

Fans expecting the over-the-top gore of THE WOMAN or the emotional devastation of MAY might leave KINDRED SPIRITS a bit unsatisfied, as it’s a far more conceptually humble and understated affair than McKee is known for. But Silverton’s script helps channel the flow of McKee’s increasingly firehose-like sensibility into a focused stream, resulting in what isn’t simply his most approachable work, but his best and most insightful in years. KINDRED SPIRITS is a psychological shocker that proves he’s lost none of his ability to prod you right in your discomfort zone with drama that’s elevated, violent, blisteringly human, and progressively female-focused. In short: it’s signature Lucky McKee, and as vital and strange as anything he’s ever made.