In the new horror film STOKER HILLS, a group of young, aspiring filmmakers inadvertently find themselves in the leading roles of a serial killer’s dark and deadly plan. After their video camera is discovered by the local authorities, it is up to the detectives to piece together the footage and save the teens before their final curtain call. Along with horror icon Tony Todd (Candyman), the film boasts a fresh young cast that includes Steffani Brass (Six Feet Under), Eric Etebari (Narcos: Mexico), David Gridley (The Duff), Vince Hill-Bedford (Sorority Slaughterhouse), and Tyler Clark (Station 19).

Directed by Benjamin Louis, STOKER HILLS draws inspiration from the late 90s, early 2000s era of filmmaking in its own unique way. Mixing found-footage style segments with gritty, dark detective fare (ala Zodiac), the look and visual tone of the film is as large a character as its mysterious, cloaked killer. In order to achieve and marry this important blend of styles, Louis called upon cinematographer John Orphan. Well-known for his masterful ability to craft deliciously dark and engaging visuals on-screen, Orphan was the perfect cinematic partner to bring Louis’s vision to life. To learn a bit more about the interesting look of STOKER HILLS, Rue Morgue caught up with Orphan to discuss his approach, the art of shaky-cam, the perks and pitfalls of night shoots and so much more.

How did you first get involved with STOKER HILLS and what enticed you into taking the gig as the cinematographer?

The director, Benjamin Louis contacted me. He found me on the internet somehow and he sort of sweet-talked me with what exactly he wanted to do with this thing in terms of the look. It was initially really, really dark which is kind of my wheelhouse. So it was already kind of what I like to do. And then he was throwing out references to movies like Se7en and other really, really creepy dark movies. That’s when I was like, “Okay, this sounds like fun.”

When developing the look and visual direction for STOKER HILLS, what were those initial conversations like?

Well, it’s different with pretty much every director, but in this particular situation, Ben contacted me because he liked some of the stuff I had done in the past and thought I would be a good fit for this. So, we already were on the same page. And then we would just brainstorm and send each other images. And that’s basically how it normally goes, just comparing images. Because, you know, I speak a visual language. So, for me, it’s easier to look at pictures and to send pictures to a director rather than try to describe things to each other.

One of the things I think is really cool about this film is the way it juxtaposes a found footage style of filming with a more traditional cinematic approach. For those found footage sequences, how much of that was actually you filming, and how much of it was the cast? Because, from the audience’s perspective, it of course looks like all of it is being filmed by the characters themselves.

There were some situations where it was important for the actors to do it. And most of the time when we would do that, we would give them a much smaller camera than what we were shooting the rest of the movie on. So anytime we needed to see, like for instance, the actors’ feet as they’re running or pieces of their wardrobe to give the impression that it’s them running, we would give them a small camera to run with and then use that footage. And it was usually very frenetic kind of stuff, but the rest of it—most of it—was being filmed by me with a RED camera and the full cinema thing.

Found footage is fascinating as there really is an art to that shaky-cam approach. As someone with years of training and years of experience honing your craft to look particularly cinematic, did you find it at all difficult or challenging to film in this kind of deconstructed, intentionally less polished style?

Yes, it was. Ben kept looking at the screen and requesting it to be shakier, but at the same time, the audience needs to actually be able to focus on something. So most of the time I was doing it a lot less shaky and would hope that post-production would add some shake to that later if needed. Because I want to make sure that we’re recording enough information for the audience to register what they’re seeing and I think that’s important. Sometimes I think you can go overboard with too much like, “Oh, it’s so crazy! And it’s wild out here!” But in the theater, or to a viewer, your eyes just can’t focus on anything. And if they can’t focus on anything, they’re not taking in any information and they’re confused. So what I like to do is give them half of that and then have the editor or the effects artists add extra franticness to it in order to dial it in to taste, basically. 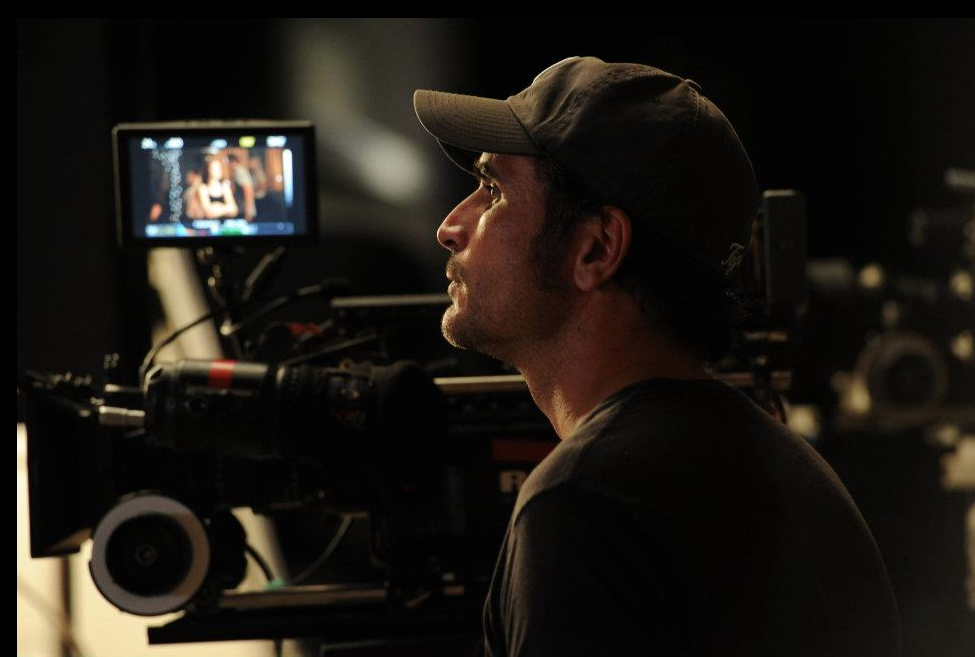 Cinematographer John Orphan on the set of STOKER HILLS

Along with this found footage, there is also a real-time, more traditional film narrative going on that’s shot in a more traditional way. What were some of the techniques you used to marry these two distinct styles so that the film still retained a cohesive feel?

Sure. Well, we wanted those two areas to be relatively separate, but also not be so jarring that the audience is taken out of it and has to redefine what they’re looking at. So, there are two different aspect ratios. The story that takes place when we’re filming the detectives is where we shot with anamorphic lenses and we shot so the aspect ratio was 2.4:1. And when we were shooting the kids’ stuff, it was 16:9.  We also had two different looks that we kind of dialed in for color. The first one we got as close to a dark and dreary thriller as we possibly could. And for the other one, we kind of tried to mimic a video camera and what a video camera naturally puts out. And then we kind of made that even a little creepier than normal.

There appear to be two very distinct lighting styles utilized throughout the film to signal the detective’s world versus the villain’s world utilized. Talk a little bit about that and how you achieved that look.

Well, at the beginning, we did about a week of testing different looks and different lighting styles. In the end, we kind of settled on two distinctly different looks for these two different areas. My gaffer, Jorge Hernandez, and I came up with some very specific rules we were using throughout this thing. So we were using a lot of really, really, really soft directional light for everything. And we would just keep going. We kept adding layers and layers and layers of diffusion until we got something right. So we were using very large units with a very heavy diffusion on them so that we were able to cut the light off of other areas. That was kind of our go-to method throughout the whole film.

Much of the film takes place at night and while it’s extra creepy that way (especially during the found-footage sequences), I have to imagine that comes with its own set of obstacles. What are some of the perks and more challenging aspects of night shoots?

I think one of the benefits of shooting at night was, for myself and my gaffer, Jorge, we had complete control over what we were doing. We didn’t have to worry about the light changing when we were outside at night because we were the ones providing all of that. So that’s the one benefit. The hard part is, you know, having a call time that’s 5:00 PM and a wrap time at 5:00 AM. Also, while we were shooting this, I think it was February, I don’t remember the exact month, but it was freezing and it just happened to be during a cold spell. So when we were shooting all that stuff, anything that you see that was shooting outside, it was between 39 and 42 degrees. I don’t know if you’re calling from California, but we’re all Californians over here so to us that is like, polar. [Laughs]

Was the whole film shot in California?

It’s all shot in Los Angeles, the whole thing. As a matter of fact, we had one big problem with our initial, original shooting location for the exterior forest stuff. It was supposed to be in the Angeles National Forest, but there was a snowstorm that iced over all the roads and we couldn’t even get there. So, we ended up having to shoot this in Griffith Park which is basically like the California equivalent of shooting in Central Park. So when you see the two detectives and they’re outside, that’s actually right in the middle of Los Angeles.

The villain in the film is a rather mysterious character and the cinematography really supports the fear and menace surrounding him. How did you tailor your approach towards shooting this character to help define him?

Ben had initially said that we didn’t ever want to show our villain’s face or a whole lot of it anyways. They actually referred to him in the script as “The Shadow.” And as a result, we wanted to keep him in the shadow as much as possible. Because, the less you see, the less detail an audience can see, I think the creepier it is for people. You just can’t register stuff. So, we wanted to keep him as dark as possible and specifically, absolutely not see his face.

So generally, we shot him a little bit lower than everybody else to give him the impression that he’s much larger. And actually, the actor that played him [Jason Sweat] was like, 6’2”, 225 pounds, and all muscle. So it wasn’t very difficult to make him look imposing. We shot from a lower angle and kept him in shadows as much as possible. We also kept taking light away. I kept asking the G&E [Grip and Electric] team to just add flags anytime we saw too much detail on that guy.

While the last few years have been a bit weird (to say the least) for productions, there has still been a lot of incredible content. Any new faves or things you’ve been enjoying recently?

Oh, gosh. Let’s see. Well, I, of course, watched everything that everyone was watching early on in the pandemic like Tiger King. Of course, that was great. I just finished the new season of Ozark too, which is incredible. As far as movies go, Dune blew my mind. That was an incredible experience and I thought that was pretty, pretty amazing. That’s what has been keeping me entertained. That, and going and rewatching old series.

When we were really in lockdown, I went and rewatched all of Game of Thrones and all of Breaking Bad because there was just nothing else to do. You could sit there and watch nine hours of television and actually really focus on it. For me, it was kind of fun. I could really focus and learn a lot about visuals and what other people are doing.

STOKER HILLS is now available to rent or purchase on VOD via Screen Media Films. You can also check out more of Orphan’s work by visiting his site and in the upcoming horror film, REAP/SOW. 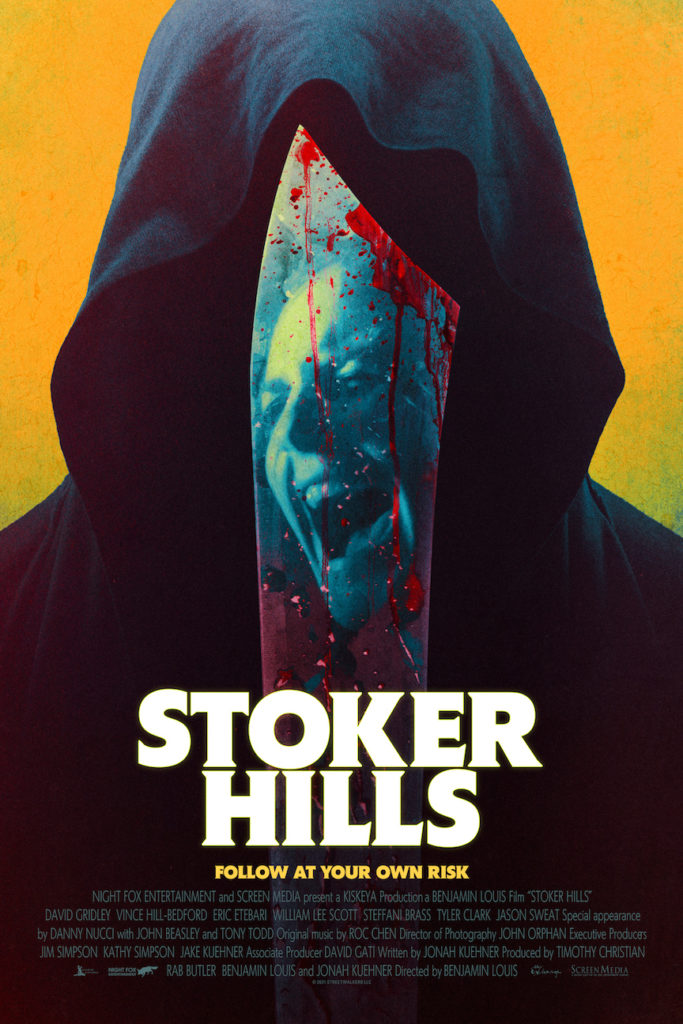