Brea Grant is easily one of the most exciting women working in film today. Not only does she co-star in the recent buzzy festival premiere The Stylist, but her latest feature film as writer/director, 12 HOUR SHIFT recently garnered rave reviews, and LUCKY, which she also wrote and stars in, is hitting Shudder next year! Rue Morgue sat down with the prolific genre maven to discuss her current projects.

There aren’t really any “good guys” in 12 HOUR SHIFT? How did you go about constructing a film where it is really hard to root for someone?

I did want you to be rooting for Mandy [Angela Bettis] a little bit, but my intention from the beginning was to create a female antihero. I think we see a lot of male antiheroes, the John Wicks of the world. We see a lot from these guys who go and kill a bunch of people or do all these horrible things, and we are still supposed to like them in the end. I wanted to see a female version of that.

The story started with just Mandy being this asshole who sells organs on the black market and I built it out from there. It became almost equally about her cousin Regina [Chloe Farnworth] as well. Who I do think is a true psychopath. I don’t think she is someone who you should relate to in any way. I think she is a fun character. My goal is to draw the audience in through fun and that is why they care what is happening. It was something Angela and I talked about from the beginning. People don’t have to like you. People don’t have to think she is a great human to want her to survive all the way through the movie. We should want other humans to survive generally.

Did you always have the part of Mandy in mind for Angela?

No, but it seems like that when I watch it! She’s so good. We got the money for the movie, and then we had a month to prep everything. We started reaching out to actors and doing some taped auditions. Very early I brought up her name in the process. My producers are big fans of her also. I have a running list of actors that I keep, whom I always want to work with. She has always been at the top of that list because of May, but also Drones which Amber Benson [Buffy the Vampire Slayer] directed. Angela shows so much range between those two movies. I reached out through her agents and I reached out through Amber Benson, who passed along the script. Then I met up with Angela. She liked it and she liked the idea of it. From the very beginning she just got it. “It is a comedy.” Some people wondered if it was going to be funny. It is very funny! It is very dark, and it can be weird, but it is funny. She got it from day one.

Did you do much research into the black market trade for organs?

Not really. I did a lot more research about drug addiction and nursing and things along those lines. For me, I wanted it to play out a bit like an urban legend. I wanted that part of it to feel a bit otherworldly and surreal. Maybe it was something that was happening all the time in the 90s that we didn’t know about. You want to know what was so weird? While we were shooting in Arkansas, there was a black market for organ trading exposed. We all read the article and it was nothing like what we were doing.

Their understanding of the organ trade is a reflection of their incompetence.

It is meant to be that way too.

“That’s kind of a nice place to live as a filmmaker: to know you have this common language with the people who are going to be watching your movies.”

Pivoting to LUCKY, where did the idea for that come from? Other than the fact that it can be horrifying to be a woman in this world.

I think that is at the core. Personally, I’ve had some issues with a stalker in my past. Dealing with the court system, and dealing with people’s reactions, and feeling unsafe, it all turns out it is a universal feeling for women. I would tell people this story, and every woman I would tell would have a similar story. I took that and pushed it to the point of absurdity.

It is a heightened reality, but at its core, it’s emotionally real.

I let a lot of people read this script, and people gave wildly different notes. I did feel that the male-female response was pretty split. Men were like, “Why did the husband say this?” That’s because it is what my boyfriend at the time would say to me. It is not that unrealistic.

I know I’ve had issues with being made to feel unsafe by men, and then dismissed by men I should be able to trust.

It’s amazing just how universal it is. It is part of the female experience, both having to deal with it and then being dismissed.

In the third act of LUCKY, text and subtext start to interact and your character, May, makes different decisions than I would have made. How did you work out how she would deal with these complications?

There were earlier versions of the script that were much more slasher, [like] Happy Death Day, and just about this happening to her. And that was it. At some point, I came up with this parking garage idea. All women are afraid to walk around a parking garage alone at night. Then it became more clear to me that I should make it about a lot of women. Character-wise, I wanted May to make selfish decisions. We live in a world where we often act not in the best interest in our communities. Not in the best interest of other women, because we are told that the only way to get by is to make these really selfish decisions. We have to step on each other’s heads to get to the top. I think May buys into that. Again, it is a bit of a female antihero, or an unlikable woman. She makes a lot of shitty choices. It is interesting to me because it doesn’t necessarily mean that she deserves to die, or anything. But it does make her a very complicated final girl.

Her actions shouldn’t be that surprising, but I think I was just hoping for more from her.

Over the course of the movie I think we see that she knows she sells bullshit. She has been so indoctrinated into, “You don’t need other people in this world.” She can’t see past it anymore.

How useful is the concept of “genre” as a categorization to you as a filmmaker?

It is helpful to me because I know I am drawn to that. I’m drawn to specific things within horror and within sci-fi. It helps me categorize what I am interested in making and what I am interested in doing, and the community I think will respond to what I am doing. There are obviously movies that walk that line, outside of the genre world. Coming from an acting background, very early on they ask you, “Do you want to do comedy or drama?” You have to brand yourself. Are you the girl next door or are you the best friend? You have to choose. It is so irritating to me, as an actor. But as a filmmaker, I kind of like the branding, because it is helpful when looking for someone who can do horror or dark comedy.

It seems like you use these genre conventions to toy with audience expectations a bit too.

The thing about the horror audience is that they like horror and horror nuance; they like new takes on horror. Within the genre world, we come to accept all these freakish films as part of our own. We don’t have to explain the slasher movie in LUCKY. We are taking the trope that people already know, and doing this weird thing with it. That’s kind of a nice place to live as a filmmaker: to know you have this common language with the people who are going to be watching your movies.

Have you always liked horror movies?

Yeah! I liked horror movies as a kid. They always scared me a lot. As I got older, I just kept watching horror movies and reading a lot of comic books. It is all I want to live in. I love escapist media but I also love things that have something to say within them. I think the genre lends itself to that in a way that, maybe [within] a drama, would be harder to take.

What scares you?
A lot of things. My dad has Alzheimer’s, and I am very scared of Alzheimer’s. It’s hard to watch someone deteriorate. When he got diagnosed I changed a lot of things about the way I ate, the way I live, exercising, brain games. It is the scariest thing to me that I would start to lose my brain, my thoughts, who I am.

12 HOUR SHIFT is now available on major streaming platforms, and LUCKY is slated to premiere as a Shudder exclusive in 2021. 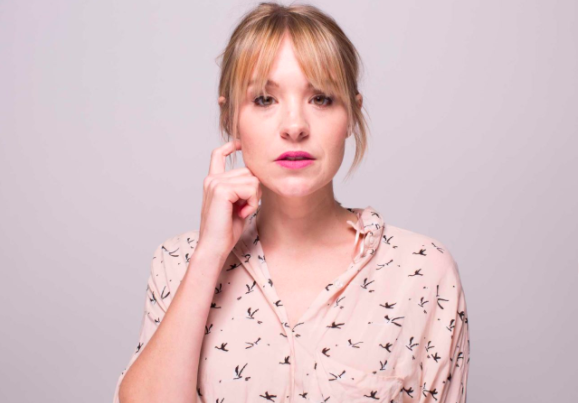