Bottleneck Gallery out of Brooklyn, New York, has been busy since last featured on Sunday, Bloody Funday. The sheer output of quality awesomeness is staggering; take, for example this ALIEN & PREDATOR SCREEN PRINT SET measuring 36 X 24 inches courtesy of Melbourne, Australia artist simply known as Florey. Mr. Florey has captured the atmosphere of both movies using a minimalistic feel but still showcasing the two creature protagonists. You can catch more of his horror-related work on his social Media and webpage (below). This set hand-numbered edition of 150 can be purchased separately with both prints costing $50 USD or in the set for $95 USD (prints officially licensed by Acme Archives). 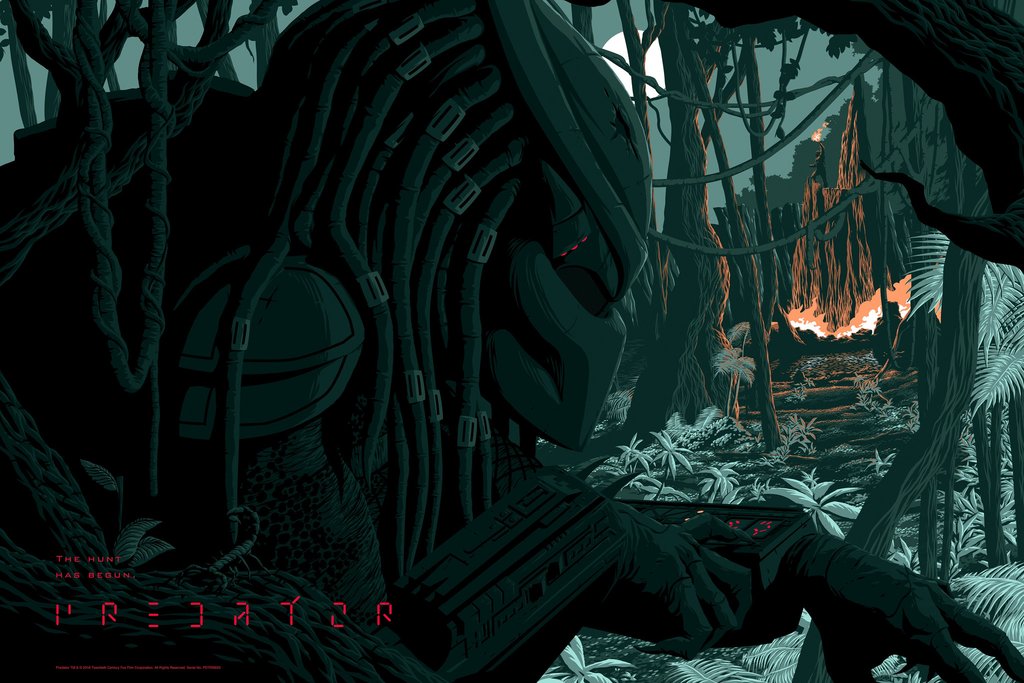 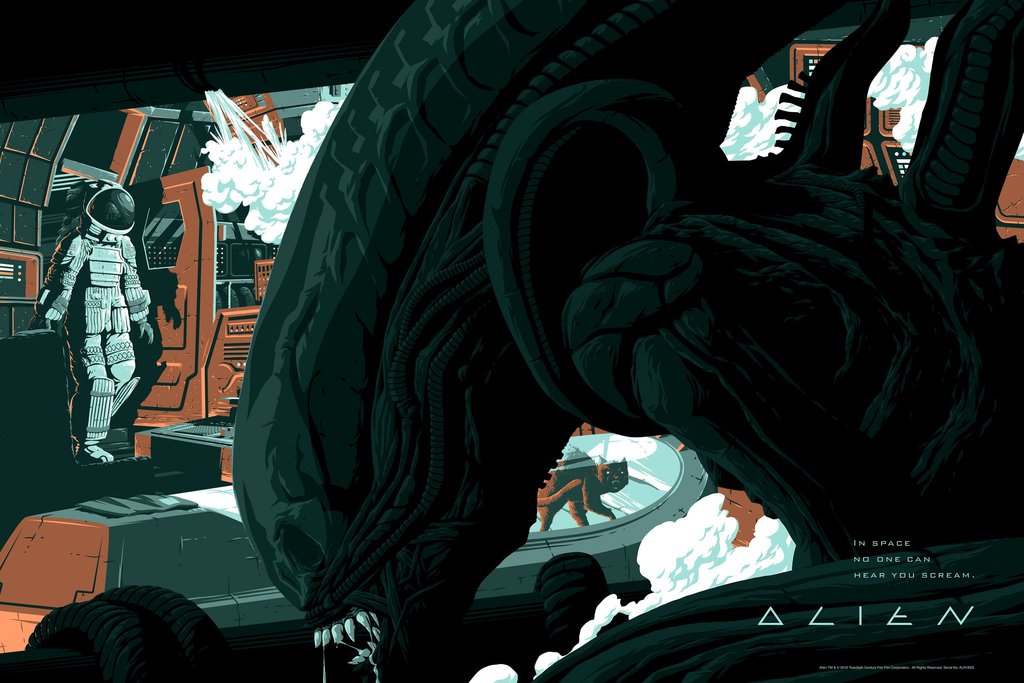 Collectors should note is that Bottleneck prints tend to sell out very fast (like most of the prints that will be shown here today), but you may have the opportunity of getting lucky and scoring one in its “Mystery Tube” offerings. These are all priced with different options, even including a “regular” and “variant” edition. Be sure to pick the option that best suits your needs.
Mystery Tube

Now let’s take a look at a few different artists’ take on the movies that bloodied up the eighties and nineties. Legendary movie poster artist Robert Tanenbaum, the designer of such posters as Stephen King’s Cujo and the 1974 Canadian slasher Black Christmas, now puts his countless years of experience into creating a revealing poster for the killer from Crystal Lake. His FRIDAY THE 13th SCREEN PRINT measures 24×36 inches and come hand-numbered with 150 pieces available. This poster screams eighties horror with its use of large title letters up front and the background giving us a glimpse at the killer’s arm emerging from the lake with a bloodied knife in hand. People who grew up with video stores and VHS tape box art will really appreciate how Tanebaum instantly brings you to the golden age of the slasher film with this release!
Price: $60 USD). 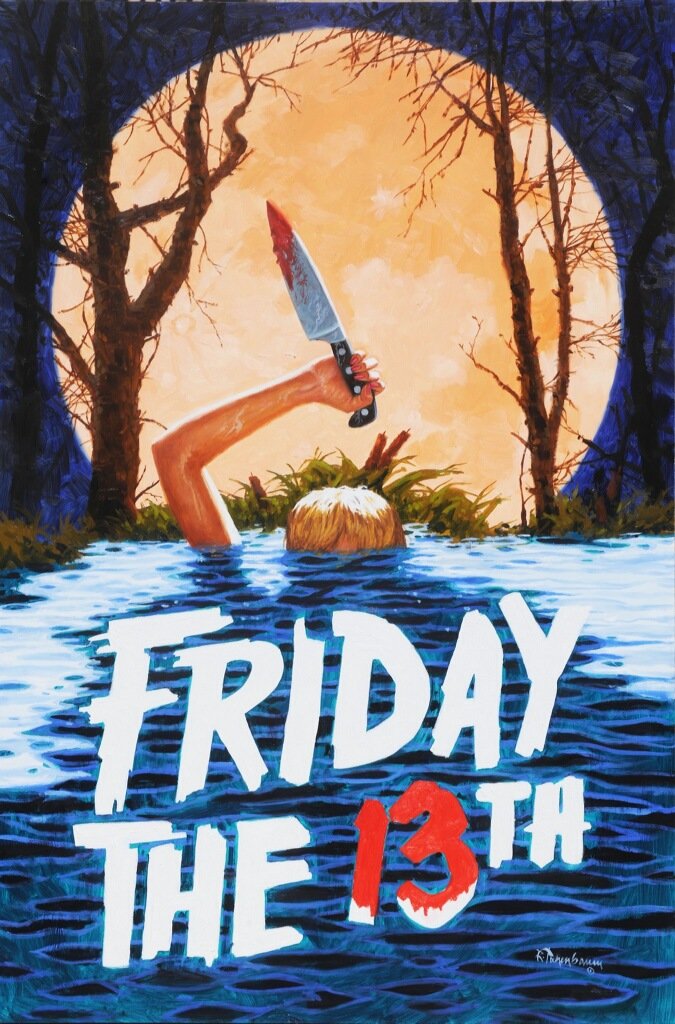 Matthew Peak, who is widely known as the original illustrator on the Nightmare on Elm Street poster 1-5 and many other classics, revisits familiar ground with the Bottleneck Gallery releases of A NIGHTMARE ON ELM STREET 3 (DREAM WARRIORS) and A NIGHTMARE ON ELM STREET 4 (THE DREAM MASTER) SCREEN PRINTS WITH VARNISH LAYER, both which measure 24X36 inches (also available in artist proof prints and sans movie title and credits). Peak, who is the son of legendary movie poster artist Bob Peak, shows that he takes after his father in artistry yet develops a style of his own. Mixtures of a multitude of colours dance through complex illustrations, leaving eyes enamored by the art in front of them. Peak also got the chance to work on one other horror icon earlier last year when Bottleneck Gallery released his version of a “Halloween poster” in his screen print. 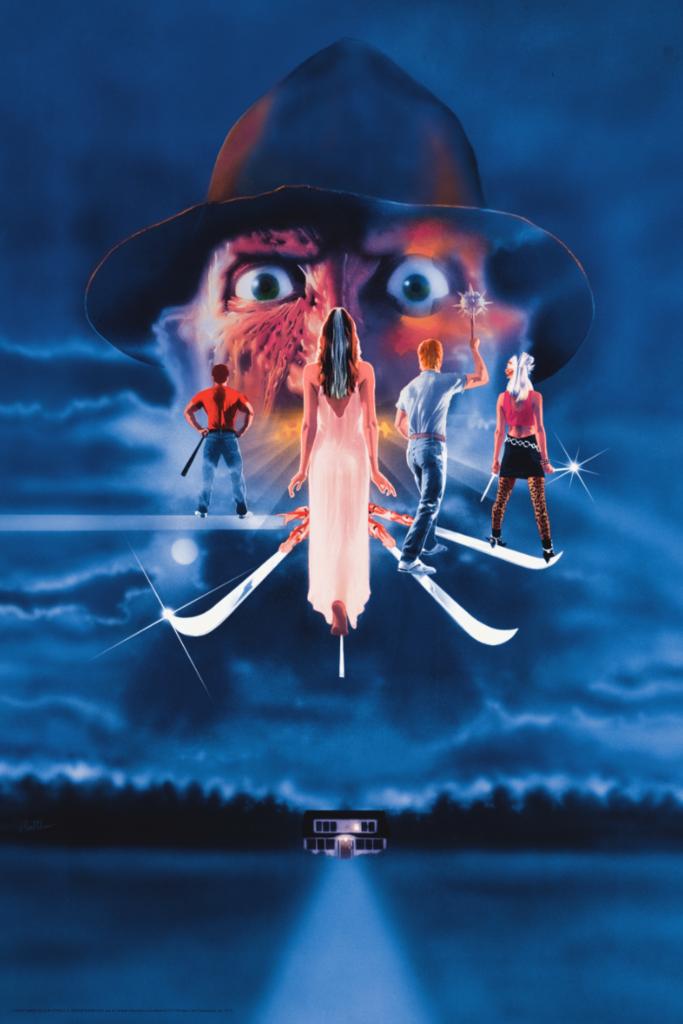 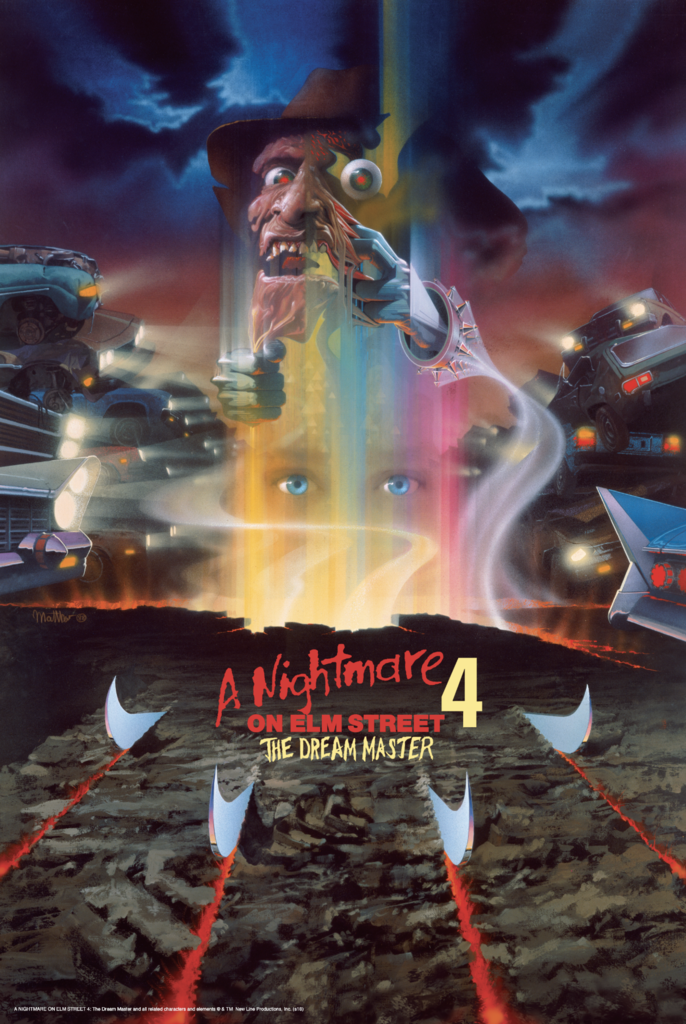 One, two, Matthew Peak is illustrating for you and collectors around the world can’t get enough as all his prints are currently sold out on Bottleneck Gallery’s website (Price $55 – $85 USD (depending on print))

New York-based artist Sam Connelly throws his burnt “fedora” into the ring with his A NIGHTMARE ON ELM STREET SCREEN PRINT measuring 18X24 inches. The one glove wearing dream-invading maniac hasn’t looked this good in a long time. Connelly decided to place Freddy front and center with the well-known boiler room in the background. Putting great emphasis on the glove and hat, you really only get a shadowy view of Freddy and it works very well. Limited to 125 hand-numbered pieces, this one says sold out, but shows 17 are still left in stock so maybe roll the dice and fire off an email to Bottleneck Gallery and see what the status really is? (Price $40 USD) 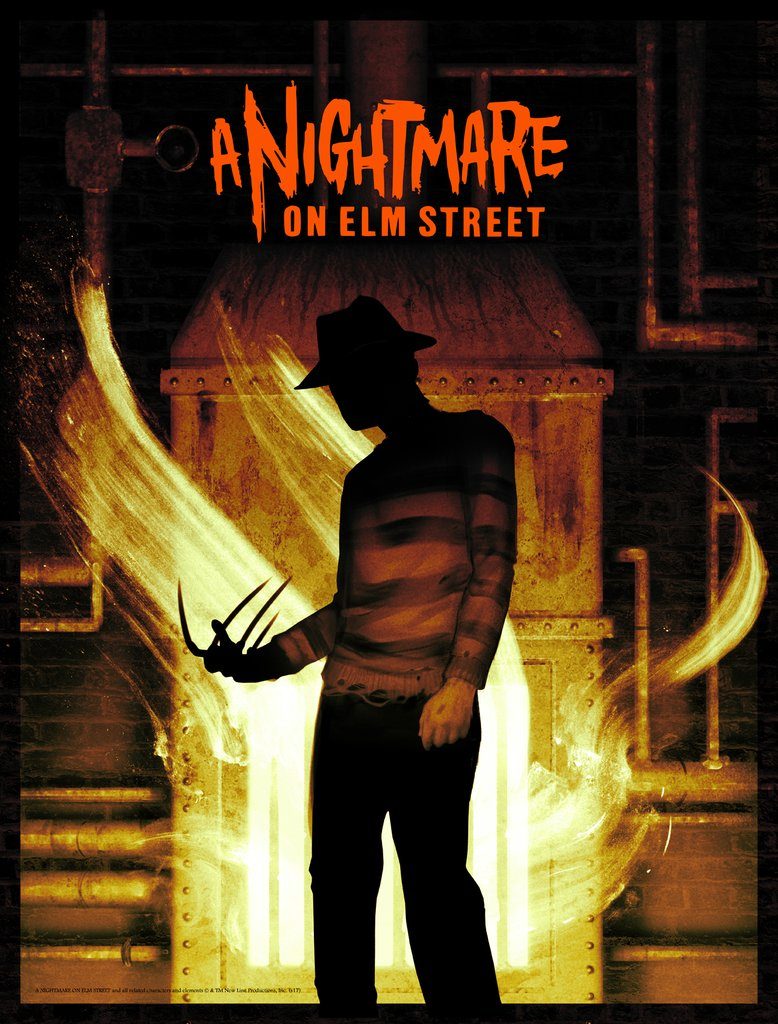 Let’s step back in time a little and check out a check out a classic horror movie character in Jeremy Pailler’s THE STRANGE CASE OF DR. JEKYLL & MR. HYDE FINE ART GICLEE measuring 24×18 inches (a French term meaning to spray). These pieces of art are made in two dimensions and then a print is made using an inkjet printer. This particular piece was made highlighting the gothic novelfrom1886 by Scottish author Robert Louis Stevenson. 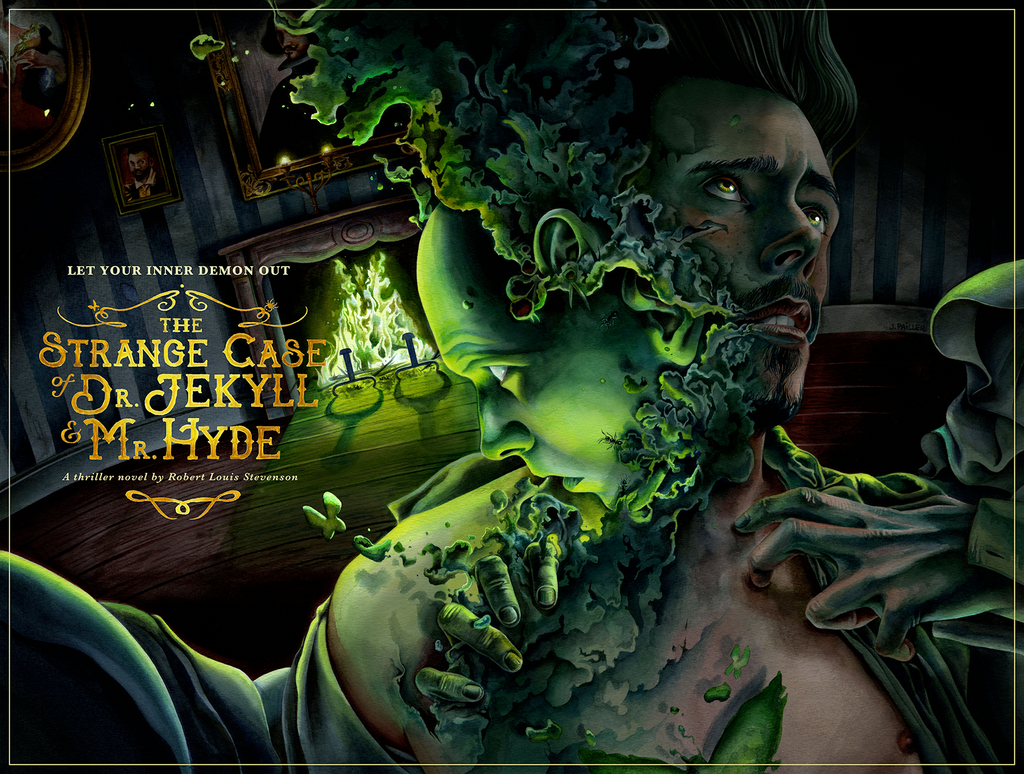 Pailler does a very admirable job keeping true to the original material by highlighting the horrible struggle that Mr. Hyde goes through to keep Dr. Jekyll at bay. He does this by intertwining both personalities in a very apparent struggle for complete dominance. The use of darker tones benefits to highlight the beautifully created illustration of Jekyll and Hyde as one. Luckily if you’re a fan of this piece there are still a few in stock on the website of the hand-numbered edition of 75 that were created. (Price $40 US)

Last but certainly not least, is that goalie mask wearing mama’s boy himself in Hans Woody’s FRIDAY THE 13th PART III SCREEN PRINT which measures 24X36 inches. Both regular (hand-numbered edition of 125) and variant edition (hand-numbered edition of 50) show off a stylized portrait of Jason Voorhees and the hockey mask worn in part three of the Friday the 13th series.  Woody really relies on the eyes of Jason to show off how dangerous he can be. Placing the movie title and the top of the print helps to just let Jason’s face to tell the story and it does.
(Price Regular $50, Variant $60) 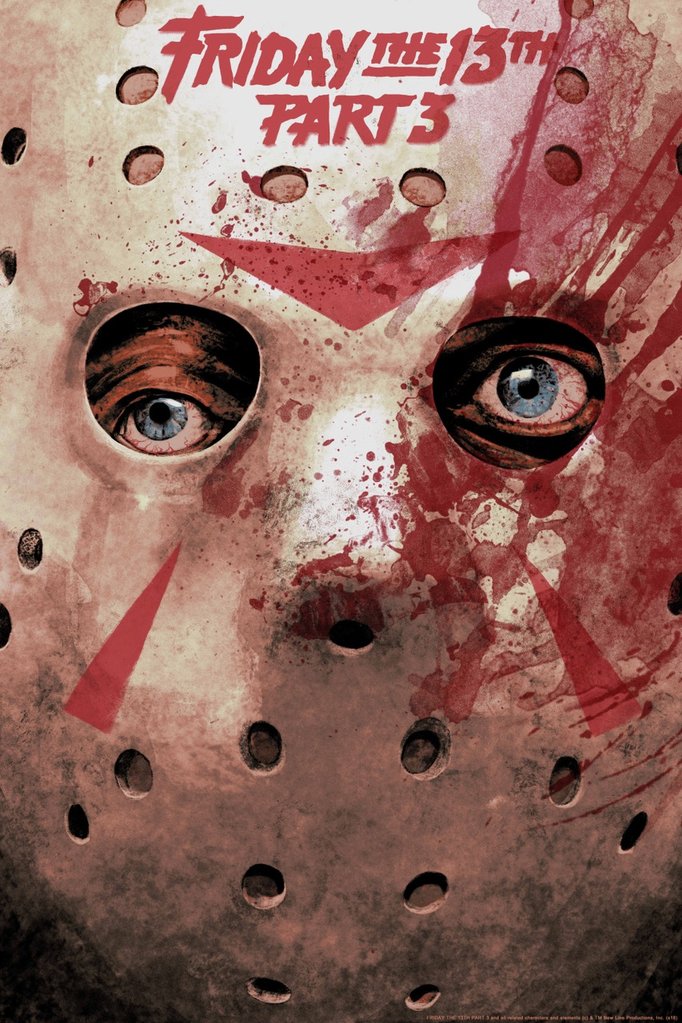 Whatever your horror fancy, Bottleneck Gallery has you covered. Just remember to sign up to their newsletter and mark your calendars so the prints don’t sell out until you get yours!