The world of film analysis has seen its fair share of ink spilled on cinematic mothers, but an often overlooked niche of this archetype is the specific relationship between mothers and sons. Though the movie world is filled with examples of women and their male offspring, horror has a particular knack for using this familial bond to explore the truths often hidden in stereotypes and jokes. In her debut book MUMS & SONS, author Rebecca McCallum evaluates this complicated dynamic with close looks at three films, each representing the mother/son relationship at different stages of the son’s life. McCallum concludes this investigation with a compassionate but objective look at horrific motherhood, a taboo subject frequently felt but rarely spoken about. Her excellent consideration of three different mothers and their troubled sons shows horror’s ability to help us unpack the difficult subjects in our own lives.

On the surface, the films McCallum has chosen to analyze are a disparate bunch. The Babadook, providing the example of a relationship between mother and child, follows widowed mother Amelia (Essie Davis) as she struggles to grieve for her lost husband while raising her rambunctious young son Samuel (Noah Wiseman). Jennifer Kent’s striking film is a blunt but beautiful example of unresolved grief and unconditional love. McCallum uses Ari Aster’s debut film, Hereditary, to explore the tenuous relationship between teenage sons and their mothers. The dark and devastating story follows Annie (Toni Collette) and her son Peter (Alex Wolff) as they are torn apart by tragedy engineered by a demonic cult. Most unique in the group is Psycho, Alfred Hitchcock’s story of a young man unknowingly leading a double life. The manager of a remote strip motel off the highway, Norman Bates (Anthony Perkins) murders a female visitor while disguised as his mother Norma, whom he also killed years ago. Though the mother is not an actual character in the story, McCallum uses the film to study the ways a strained relationship between mother and son would shape a young man as he grows into adulthood.

With her stellar column “Hitchcock’s Women,” McCallum has proven herself more than capable of offering in-depth dissection of films from the Master of Suspense. By expanding her lens to examine these more contemporary films, McCallum provides a cinematic bridge more than five decades long. Initial discussions of each film’s plots reveal three families in crisis. McCallum sets the stage for her thesis by describing the similarities between the closely guarded secrets and resentment lurking at the heart of this varied dysfunction.

McCallum’s analysis is especially compelling when exploring the physical settings in which each of these relationships exists. By looking at the location, layout, and color palette of the homes featured in the film, she teases out important nuances in each mother’s personality. As traditional keepers of the family home, mothers are often equated with the houses they manage. McCallum goes beyond this easy comparison to present these women as fully human but also intrinsically connected to their film’s central locations. She also makes note of each son’s connection to the home and his attempts to stake out space of his own in a home controlled by his mother. A comparison of Norma’s and Norman’s bedrooms in the Bates house at the top of the hill is fascinating. However, her insight is especially poignant when she notes that, “Samuel constructed a trap to the entrance of the basement in an effort to reclaim the territory that connects him with his deceased father.”

McCallum follows this chapter with her most captivating argument of the piece, an exploration between the duality and doubling present in all three films. Scrutinizing the pivotal characters that aren’t there, McCallum finds these mysterious personas in each film and uses their implied presence to further examine her focal relationships. The basement containing possessions of Samuel’s departed father becomes a symbol of the loss that Amelia cannot bear to speak of. The lurking shadow of Annie’s mother and her practice of creating miniaturized recreations of her own trauma show the long shadow untreated mental illness has cast over her family. Norman’s own embodiment of his mother shows the devastating results of a troubled relationship, providing a warning for Samuel and Peter. McCallum’s sharp analysis perfectly describes the way this narrative device is able to show the unspoken trauma that lies between each mother and her respective son.

Consisting of an introductory essay, eight chapters, and a conclusion that convincingly argues for the connective thread between all three films, McCallum’s work is an in-depth analysis of three mothers who have had seismic effects on the landscape of horror. Three fearless films explore a taboo subject while treating their characters with dignity and compassion. McCallum is equally fearless and makes a strong argument for the power horror has in helping us improve our own lives.

MUMS & SONS is available for purchase at Plastic Brain Press. 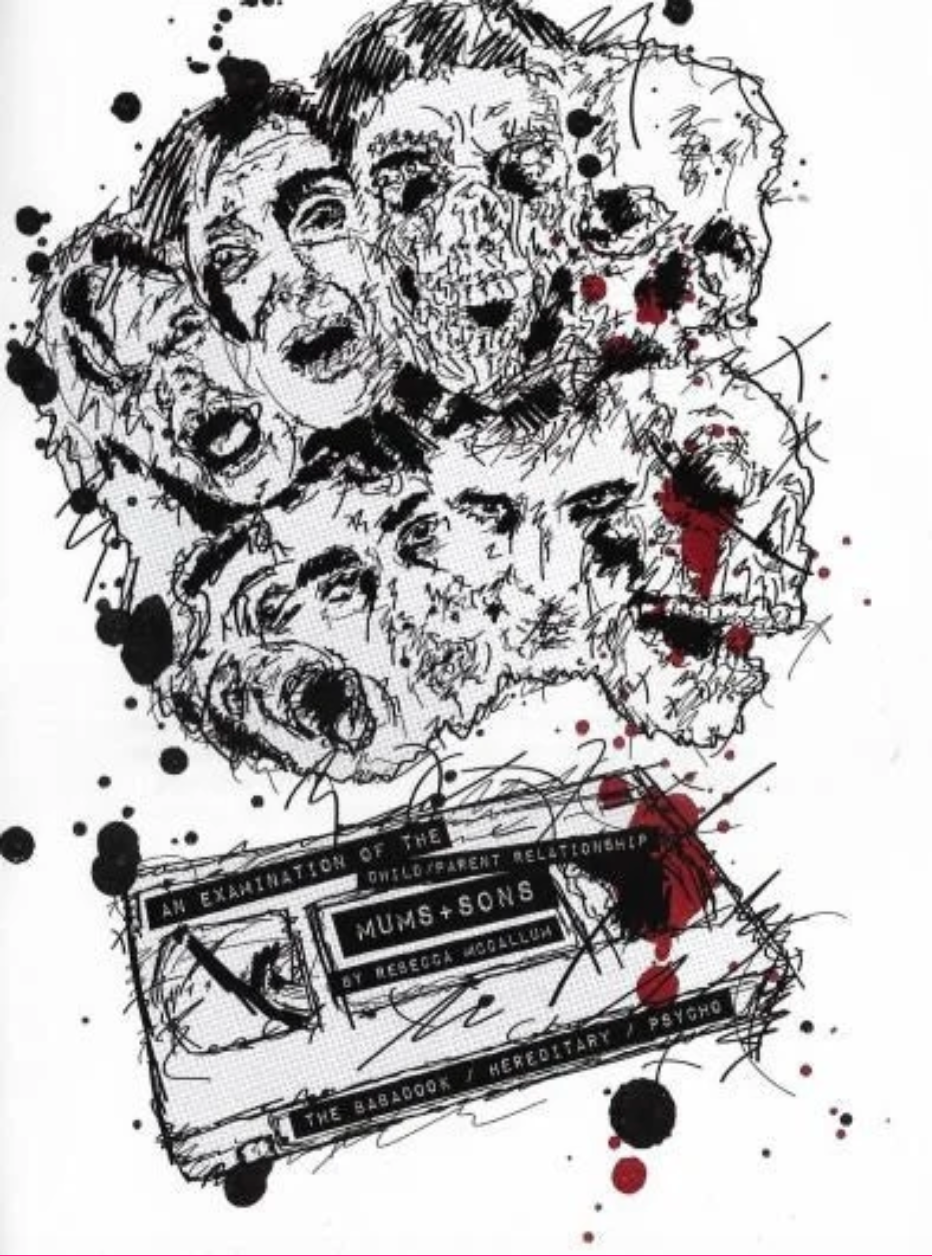