Blu-ray Review: These “Cruel Jaws” May Grab You

To put it as nicely as possible, Florida is America’s armpit. Sure, on the one hand, you’ve got Disney World, Miami Beach, and world-class retirement communities, but on the other, it’s a place harried by swarms of mating insects, comically weak gun laws, a geriatric driving epidemic, and, appropriately enough for this review, the most shark bites anywhere in the world.

If there’s one thing journeyman Italian genre filmmakers of the 1980s loved more than sleaze, it was unsimulated peril, which makes it a bit surprising that the spaghetti splatter maestros of yore didn’t spend more time in the Sunshine State, where crocodiles are as abundant as titty bars. It appears that Bruno Mattei never made it to South America like so many of his fellow countryman (he favored the Phillipines), but Florida was obviously wilderness enough for this most shameless of Italian shlocksters. It’s where he went to cobble together CRUEL JAWS, a ripoff of a certain Steven Spielberg classic that All Movie has referred to as “the epitome of outrageous thievery cinema.” A follow-up to their releases of Mattei’s similarly copyright–defying Shocking Dark (1989) and Robowar (1988) Severin Films has brought CRUEL JAWS snapping back from the direct-to-video dumpster newly remastered and uncut for the first time ever. 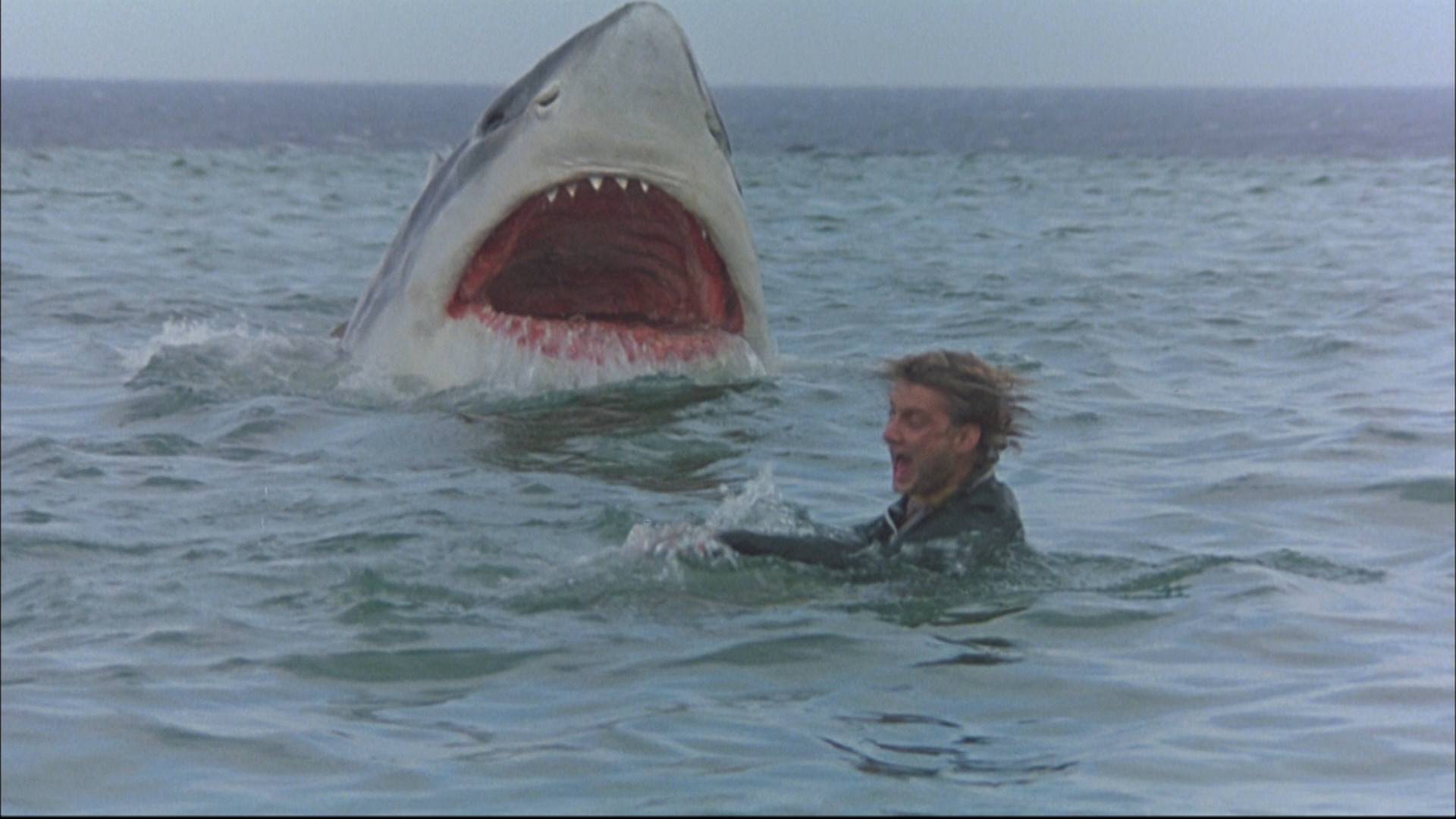 As the beachside city of Hampton Bay is gearing up for their annual Regatta, a hungry Tiger shark threatens to spoil the local’s plans for a busy tourism weekend. Though young marine biologist, Billy (Gregg Hood) implores officials to cancel the event, skeezy land developer Samuel Lewis (George Barnes, Jr.) protests against the potential economic fallout, which will land him in hot water with some New York mobsters. Taking matters into his own hands, Billy joins Sheriff Francis (David Luther), and Dag (Richard Dew), proprietor of a local aquatic park, to hunt the beast.

Lots of films tried to capitalize on the Jaws (1975) feeding frenzy, but few went so far as to pinch pieces of it wholesale. Not only does CRUEL JAWS (which, in the Italian tradition, was actually marketed in some territories as Jaws 5) lift directly from Spielberg’s blockbuster, but it cannibalizes its fellow imitators as well, borrowing plot points and footage from Joe D’Amato’s Deep Blood (1989) and Enzo G. Castellari’s The Last Shark (1981). I’d also swear on my mother that the title sequence in which a motor home hurdles down a long sea bridge is taken directly from Umberto Lenzi’s Hitcher In The Dark (1989), so it’s anyone’s guess just how much cinematic flotsam is bobbing around in this thing. 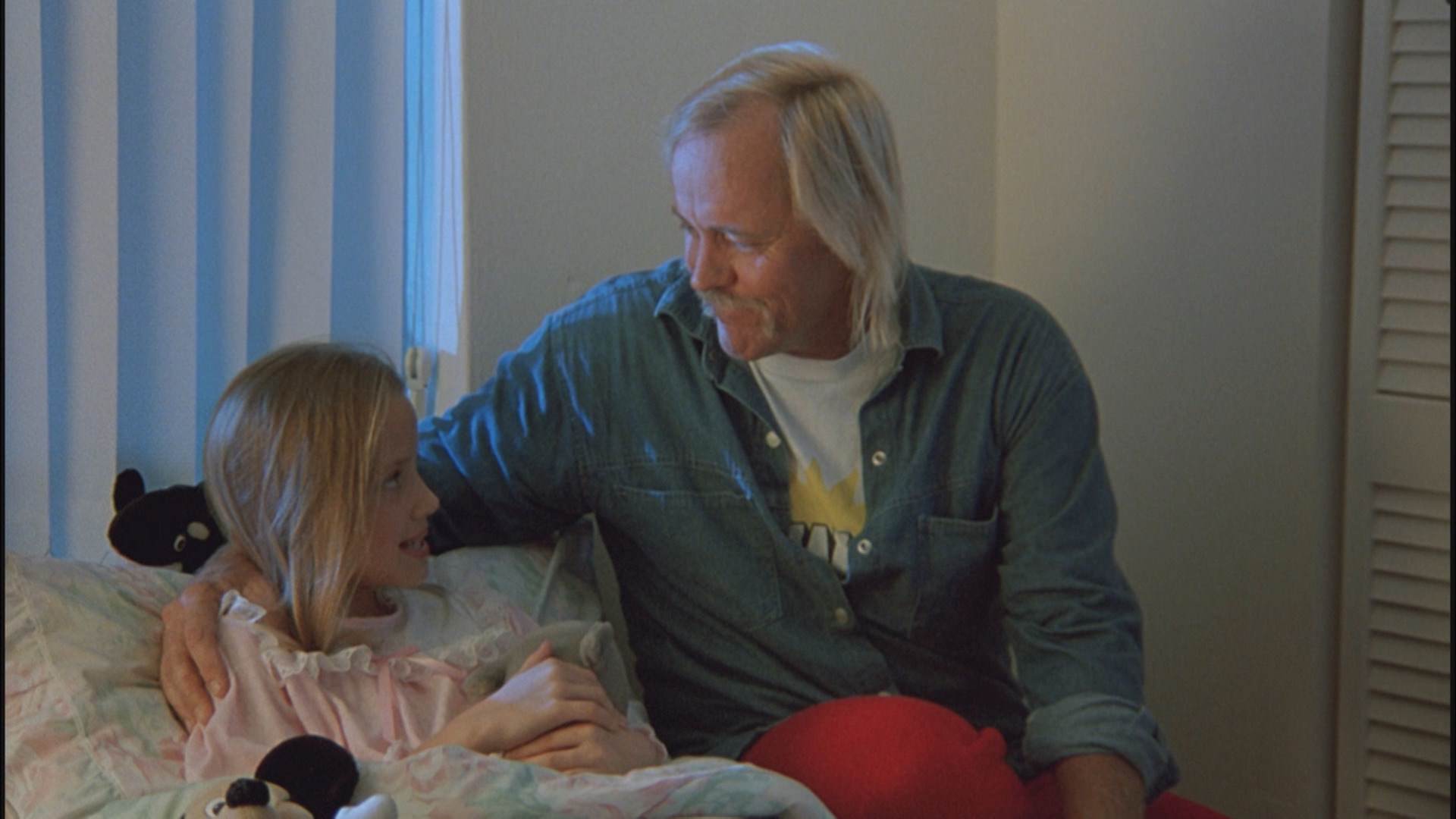 The original footage was filmed in Florida (Islamorada and the Biscayne Bay area, to be exact) with a local cast of, as Severin puts it, now-ashamed unknowns. The most notable of these is Richard Dew, who is Florida if Florida had a face, and that face just happens to look a lot like Hulk Hogan’s. The man apparently was a well-known impersonator of the popular professional wrestler, but the Severin crew couldn’t track the man down for an interview, which is a real goddamn pity. The rest of the cast is fairly forgettable, and though I’m never one to complain about oiled-up men in strappy tank tops, there are about three meatheads too many here beyond the obligatory Scheider, Shaw, and Dreyfuss stand-ins.

While CRUEL JAWS does offer some howlingly bad dialogue (“I’ll get you, motherfucking shark!), comic business involving a sea lion, and a barely convincing windsurfing set piece, it really falls short in the violent spectacle department. Aside from a couple of chewed up corpses, there’s no real gore to speak of (save for a few bright red blooms erupting out of the briny deep) and the characters spend a lot of time wildly firing guns offscreen at a razor-toothed monster that obviously isn’t there. That leaves Mattei’s unscrupulous copycatting to charm you, which might not be enough to endear CRUEL JAWS to the casual viewer. Italian genre fanatics, however, have endured far worse for much less. 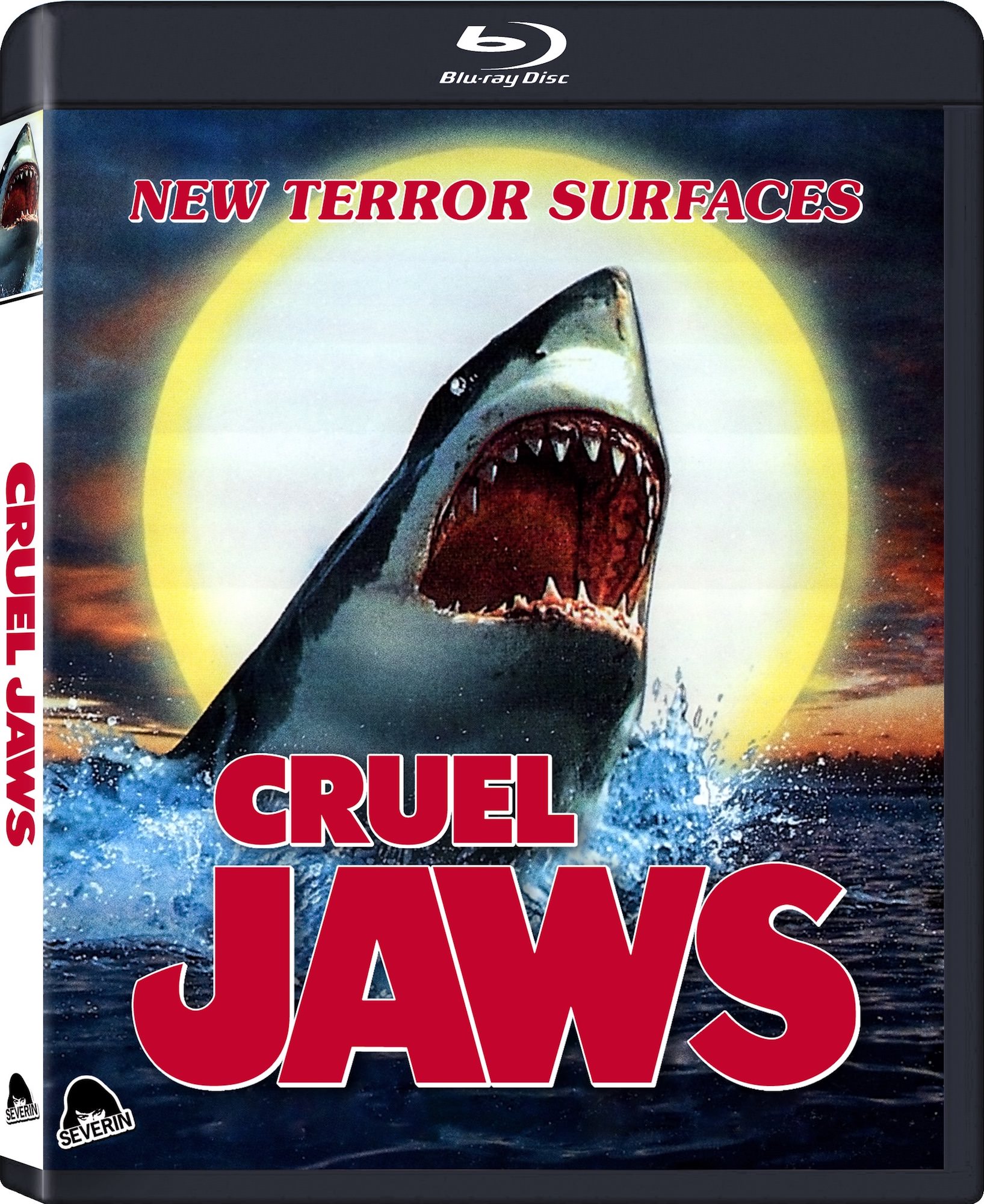 Severin’s disc boasts two different versions of the film. The shorter is the “Mattei Cut,” which he preferred, while the second is a longer Japanese cut, here, cheekily referred to as the “Snyder Cut” as a tip of the hat to Mattei’s directorial pseudonym on the film. The latter is a 2K scan, and though longer, is inferior in visual quality to the former. The Mattei Cut is so clear and vibrant you could trick yourself into thinking it was shot recently if it weren’t for all the v-cut bikinis and DayGlo trunks. The electric blue, barely–even-trying day for night scenes look practically stylish thanks to this transfer. There is some very brief color-banding in one of the only actual night scenes (go figure), but overall, CRUEL JAWS has no business looking this good.

Special features are noticeably light. They include The Great White Way – A Study in Sharksploitation with Rebekah McKendry (best known to fright fans as one of the hosts of Blumhouse’s Shockwaves podcast, and an aquatic horror fanatic), These Things Got Made!, an interview with Actor Jay Colligan who plays one of the aforementioned extraneous meatheads, and a trailer. The story behind the assembling of CRUEL JAWS almost has to be more interesting than the film itself, but there’s very little here that gives much context or background. As such, this is the rare Severin release that comes up a tad short, despite the quality of the transfer work and the obvious love that went into the package. Luckily, the company is offering some inspired extras to sweeten the deal, including a toilet decal, “Sharkamania” Bandana inspired by the film’s best character, and a brand new novelization by Brad Carter. 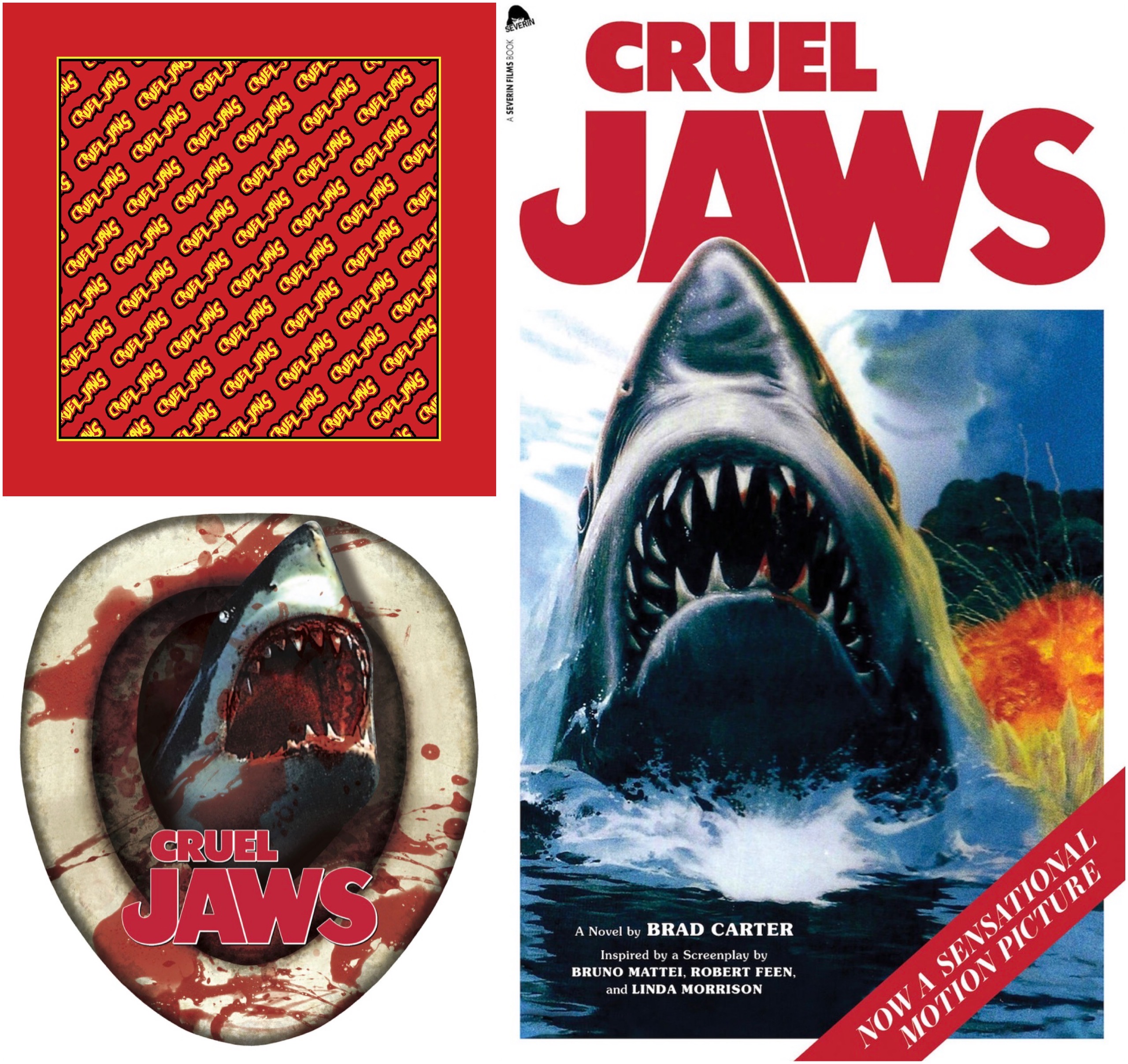 The latest in Severin’s collection of brazen knockoffs by Bruno Mattei, CRUEL JAWS is fairly tame by Italian schlock standards, but there’s plenty of salty fun to be had for fans of aquatic terror or counterfeit cinema. Though the disc comes up short in terms of special features, with two cuts of the film and a handful of ridiculous supplemental goodies on offer in the Severin store, the charm of the label’s CRUEL JAWS release is still riptide strong.

CRUEL JAWS is available September 29th, 2020 on Blu-ray and DVD from Severin Films