Director John Flynn’s BRAINSCAN feels like 976-EVIL meets THE LAWNMOWER MAN—two similarly reviled efforts that turned fears about buzzworthy popular technologies into full-blown horror stories in the waning days of the 20th century. Much like “Trickster,” the punkish digital Mephistopheles that tempts the film’s lead, Flynn’s 1994 science fiction horror effort is itself tricky—a shifty, occasionally irritating, frequently entertaining techno-chiller. Though its internal logical is iffy, the film’s impish sense of fun and would-be franchise icon have earned it a cult following, and the years have buffed its flaws into charms, converting BRAINSCAN into a retro-futuristic deep dive into digital depravity and adolescent malaise that deserves a second look.

In the story’s original treatment, Michael was goaded into action by a mysterious voice over the phone (again, very 976-EVIL) and Smith was cast to play the offscreen character. Somewhere along the way, the voice became the Trickster character as he exists today, who emerged as BRAINSCAN’s true centerpiece. This was lucky, as the infamously tumultuous Furlong is asleep at the wheel (Literally. Flynn has been quoted as saying: “You had to slap him awake every morning. I don’t want to get into knocking people, but I was not a big Eddie Furlong fan.”) and Langella similarly snoozes through his staid gumshoe role. T. Ryder Smith’s performance, however, is like lightning in a bottle. The stage actor imbues the leather-pantsed, velvet-jacketed, mohawked, rock & roll computer demon with equal parts urbanity and ferociousness. With a skillfully modulated voice (Smith knows a calculated whisper can be more powerful than a shout) and a performance that radiates through Steve Johnson’s eerily life-like prosthetics, Trickster had the charisma and gravitas to claim Freddy’s throne had the film been more warmly embraced and the idea of the franchise horror icon not grown tiresome at the time of release. 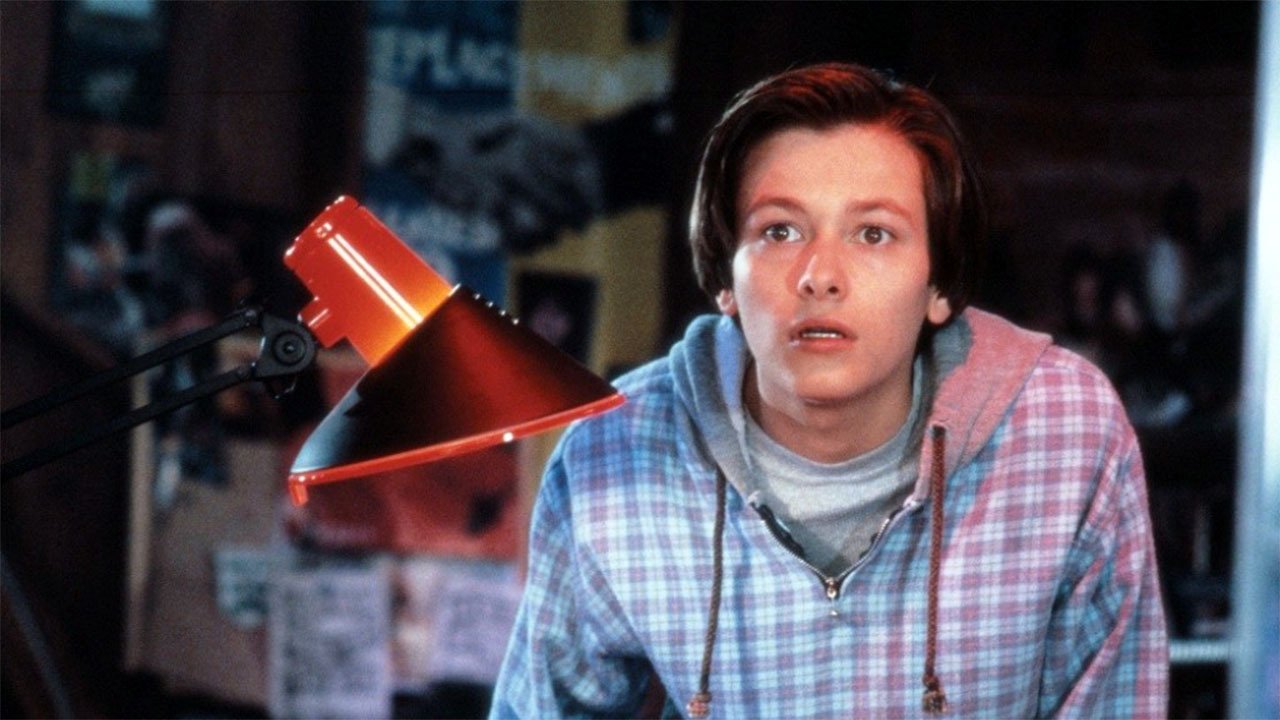 Writer Andrew Kevin Walker’s (SE7EN) script is sharp, if confused at times, betraying its origins as a first effort from a young, ambitious screenwriter working in low-budget horror, but there’s a real wily quality to it that can be appreciated, if not fully embraced. Walker undercooks the story’s more alarmist, news-headline-y elements (“Senseless violence is not entertainment!”) and firmly roots his tale in the coming-of-age category. As a viewer, it’s easy to wish that Walker had paid more attention to the themes of voyeurism, media violence and escapism that drift in and out of the narrative and go unexplored, but Michael’s journey from spectator of the world to participant in it shouldn’t be underestimated for its veracity, even if Furlong’s performance is limp.

BRAINSCAN is on Blu-ray for the first time courtesy of Scream Factory. Though this isn’t a “special edition,” tentpole release, the folks at Scream have included a bevy of special features that should satiate fans who have clamored for a definitive edition of this cult classic. The film as presented on this disc isn’t a new scan, but it looks solid. The muted color palette, populated by hazy purples and somber blues, gives the film a moody, oppressive flavor, and clarity is great without sacrificing the early 90s lo-fi-ness that gives the film its visual identity. 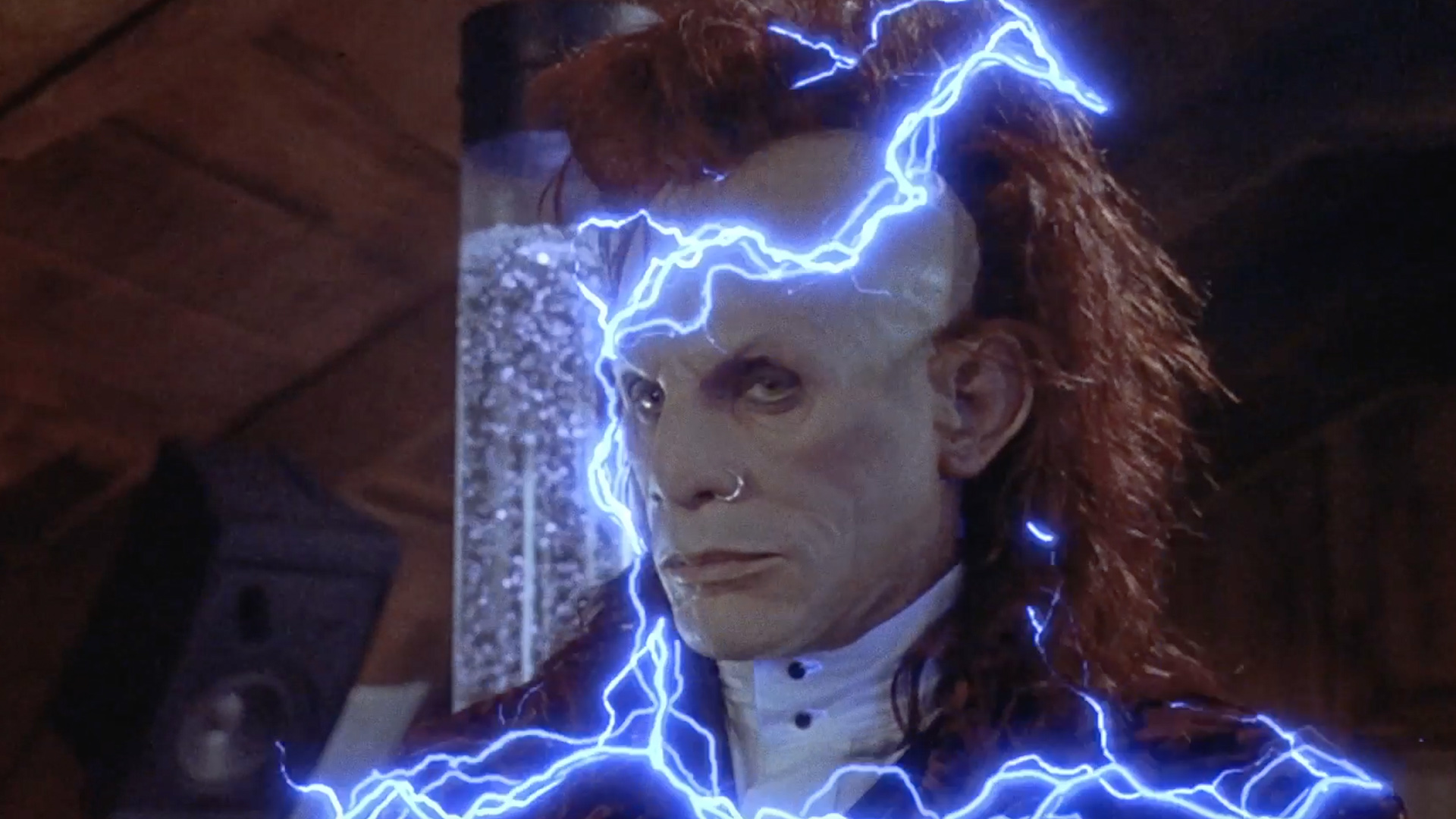 New special features include an audio commentary with assistant to the director Tara Georges Flynn, A VIRTUAL DEBUT: an interview with screenwriter Andrew Kevin Walker, TALKING WITH TRICKSTER: an interview with T. Ryder Smith, MERGING REALITIES: interviews with special make-up effects supervisor Steve Johnson and special make-up effects artists andy schoneberg and mike smithson, and MUSICAL VIRTUOSITY: an interview with composer George S. Clinton. Also included is TRICKIN’ WITH TRICKSTER: vintage behind the scenes fun on BRAINSCAN, and the expected deleted scenes, teasers and photo galleries. All in all, an excellent package!

As comforting as the warm hum of a CD-ROM, John Flynn’s BRAINSCAN is a worthy re-download for any fan of outmoded tech-based terror. This “interactive trip to hell” may not make a lot of sense, but its an ambitious take on video-game violence with a grand central performance by T. Ryder Smith as one of the great coulda-been horror icons. Scream Factory brings BRAINSCAN to the 21st century to a public nostalgic for just its type of VHS-era charms in a package that’s sure to please old apologists and new fans alike. Boot it up, and, as Trickster would say, “enjoy the fear!”