Blu-ray Review: Lose Your Marbles “In The Mouth of Madness” special edition Blu-ray

The number of horror flicks that take inspiration from the works of H.P. Lovecraft may be as innumerable as the eldritch monstrosities that inhabit his literature, but it’s rare when a film manages to vault beyond mere surface similarities into the realm of complex, unknowable existential terrors that the scribe’s works call home. Such a film is John Carpenter’s undervalued IN THE MOUTH OF MADNESS (1995), a mélange of Lovecraftian soul-sickness and Stephen King-style pulp set in a mysterious New England hamlet of the type immortalized in both of the authors’ respective fictional worlds. 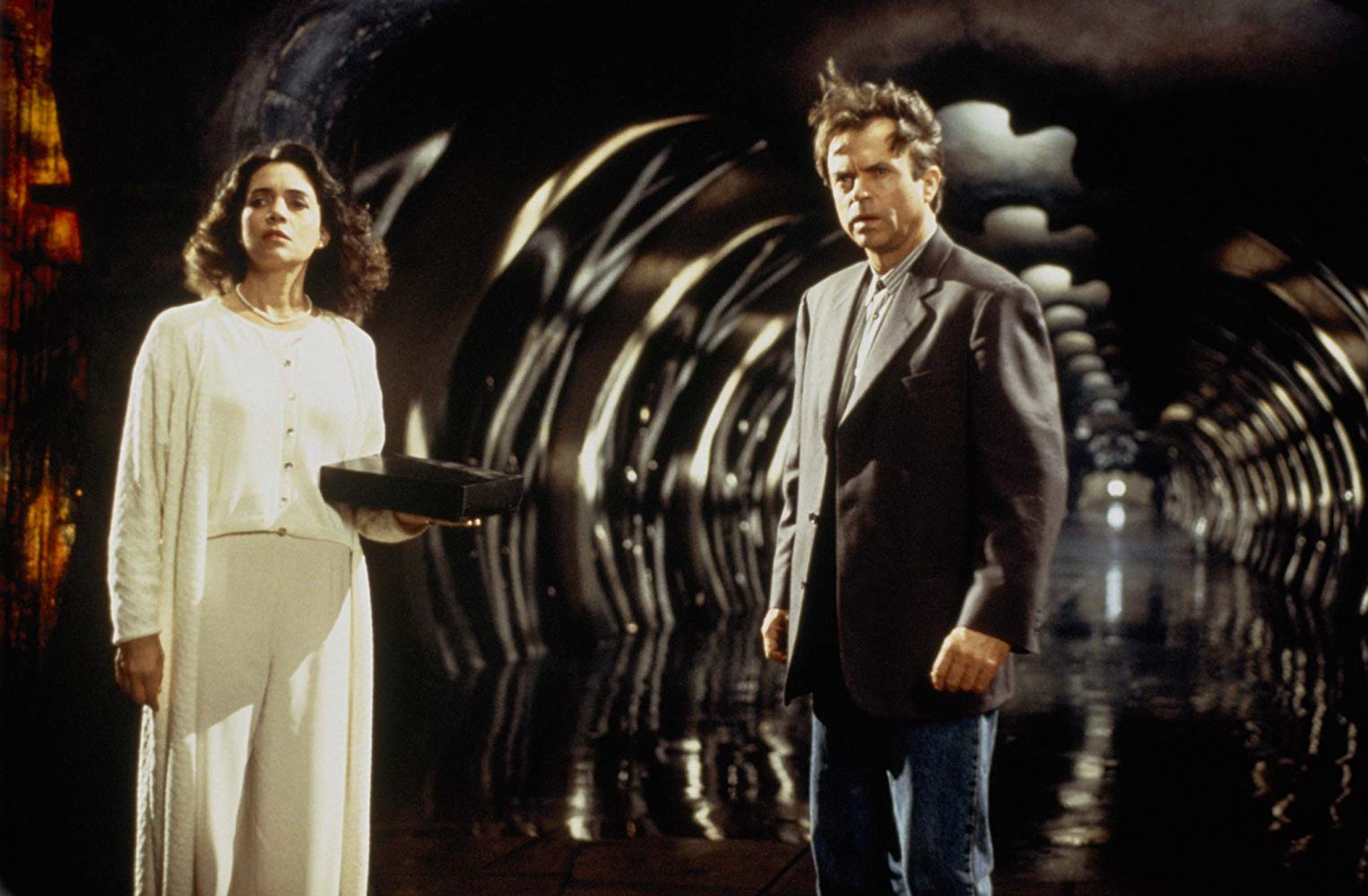 With America in the grips of an unspecified disaster, Dr. Wrenn (David Warner) presses psychiatric patient John Trent (Sam Neill) to recount the tale of how he lost his mind. In flashback, we see that Trent was once a sober-minded, nihilistic insurance investigator tasked with locating popular horror writer, Sutter Cane (Jürgen Prochnow) who up and disappeared with the rough cut of his latest, soon-to-be-best-selling novel, In the Mouth of Madness in tow. Trent comes to believe that the author is hiding out in Hobbs’ End, a haunted fictional town from his books that may coincide with a secret, real-life location on New Hampshire’s map. Publishing director Jackson Harglow (Charlton Heston) sends Trent and Cane’s editor, Linda Styles (Julie Carmen) to retrieve the manuscript, but things take a turn for the weird when Cane’s supposedly made up town and its equally strange inhabitants seem to be taking on a physical life of their own.

Despite HALLOWEEN (1978) holding the honor of being one of the most successful independent films of all time, it’s arguable that no “essential” horror director–save Tobe Hooper– has survived more critical and commercial low-points than Carpenter. Though THE FOG (1980) and less-championed works like PRINCE OF DARKNESS (1987) are now easily ranked as minor classics, upon release, audiences and reviewers (often both) were frequently ambivalent to or outright dismissive of the director’s output. Of course, Carpenter’s filmography is filled with remarkable features that have since been reevaluated and warmly accepted for their merits, but this doesn’t apply to his post 1980s work, which even Carpenter die-hards will admit is filled with missteps and botched opportunities. This is likely why IN THE MOUTH OF MADNESS has yet to enter the cult-film firmament, seeing as it’s book-ended by two of his most ignominious failures, MEMOIRS OF AN INVISIBLE MAN (1992) and VILLAGE OF THE DAMNED (1995) and is thus seen as merely another step on the road to insignificance that so many directors travel in their later years.

Luckily, Scream Factory has given IN THE MOUTH OF MADNESS its due with a special edition that should fit snugly on the shelf of any fan of cerebral terror. Carpenter’s movies mostly serve as showcases for his airtight craftsmanship and artful thrill-making, but this mid-90s effort is most closely aligned with the ballsy consumerist satire of THEY LIVE (1988) and identity-erasing horrors of THE THING (1982), films that questioned our waking reality while offering up visceral chills. Likely the most audacious work in his entire filmography, IN THE MOUTH OF MADNESS is a möbius strip that at once presents the viewer with a Lovecraftian hellscape and a commentary on the infectious power of art through metaphor. The wildly unspooling meta-narrative challenges the viewer to question the nature of madness and perception as it applies to both what the characters onscreen see and what themselves as an audience perceive. Some may take issue with Neil and Carmen’s occasionally arch performances, but, as Carpenter says in one of the disc’s commentary tracks, the film is a comedy of a sort, and the actors were exposed to Howard Hawks’ HIS GIRL FRIDAY (1940) before shooting started, at the director’s behest. When Neill’s late-century Cary Grant finds himself at the edge of reality, mind broken, and confronted with his own insignificance, the only sane response is laughter. 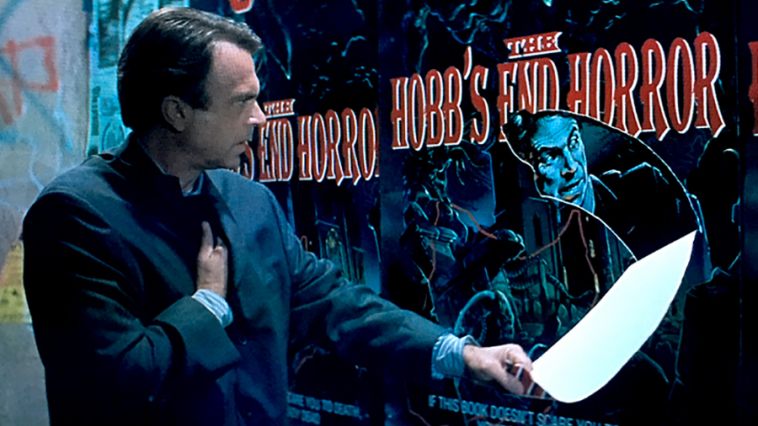 Scream Factory’s collector’s edition presents a brand new 4K digital transfer from the original camera negative. This trumps the film’s previous bare-bones Blu-ray release from 2013 with richer detail, excellent film grain levels, and deeper blacks. Though some would consider IN THE MOUTH OF MADNESS to be one of Carpenter’s less flamboyant, more muted works, the new transfer reveals more pop and visual personality than ever before. The DTS-HD 5.1 audio mix isn’t new, but is more than acceptable.

On the special features front, Scream Factory has included a new installment of Sean Clark’s series, HORROR’S HALLOWED GROUNDS which explores the film’s Toronto shooting locations. New interviews with special effects artist Greg Nicotero and Julie Carmen are included, with Carmen’s proving especially enlightening and thoughtful. HOME MOVIES FROM HOBB’S END collects Nicotero’s behind-the-scenes footage from the shoot, and a vintage featurette, theatrical trailer and TV spots round things out. A ported over commentary featuring Carpenter and cinematographer G. Kibbe is featured, but the cherry on top is the brand-new commentary with Carpenter and his producer/wife, Sandy King Carpenter in which Sandy throws subtle shade at New Line’s Bob Shaye, John discusses his affinity for Panavision, and the two fondly reminisce about seeing concerts and frequenting comic book stores during their interim in Toronto.

John Carpenter’s IN THE MOUTH OF MADNESS goes beyond mere aesthetic considerations in bringing Lovecraftian horror to its mid-90s setting. With tentacled beasties aplenty, shades of Stephen King, and a brain-frying finale, Carpenter forces the viewer to stare into the proverbial abyss, aiming to drive you just as mad as his characters. Though virtually never mentioned among the director’s classics, Scream Factory’s special edition release should help to rectify that oversight. With a stellar transfer and plum special features, IN THE MOUTH OF MADNESS has skittered forth from the yawning chasm of ages past to chew a hole straight through the thin veil that protects our fragile reality. Let it in, for H.P.’s sake! 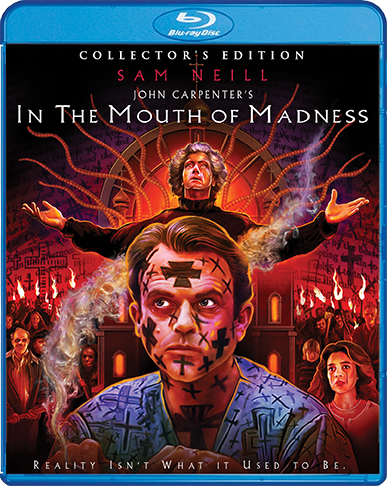