Agatha Christie meets H.P Lovecraft meets Sergio Leone in Spanish director Eugenio Martín’s genre melting pot, HORROR EXPRESS (1972). Hoping to make further use of the train car sets that had featured prominently in their previous collaboration, PANCHO VILLA (1972), Martín and producer Bernard Gordon relocated the action of John W. Campbell Jr.’s novella “Who Goes There?” aboard the Trans-Siberian railway for this tale of a body-hopping extraterrestrial force. If it sounds familiar, the novella was previously adapted by Charles Lederer as 1951’s THE THING FROM ANOTHER WORLD which would, in turn, inspire the John Carpenter’s now classic, THE THING (1982), but HORROR EXPRESS is far from a third-rate interpretation of the material. A rip-roaring mystery adventure featuring cascading sci-fi absurdities and a hauntingly infectious score, HORROR EXPRESS is the best Hammer film that Hammer never made.

In 1906, British anthropologist Sir Alexander Saxton (Christopher Lee) is set to depart China for Moscow with a crate containing the frozen remains of an unidentified primeval hominid in tow. At the station he bumps into Doctor Wells (Peter Cushing), his friendly nemesis who will also be traveling back to Europe by way of the Trans-Siberian Express. Before the train can depart Shanghai, a thief is found mysteriously dead on the platform with milky-white eyes. An Eastern Orthodox monk, Father Pujardov (a delectably sinister Alberto de Mendoza) proclaims the contents of the crate to be evil, but Saxton roundly dismisses his ramblings as ignorant superstition. Unfortunately for Saxton and all aboard, once the train departs, the freshly-defrosted creature escapes from its confines, starts killing passengers, and displays the ability to switch bodies at will. It’s up to Saxton and his sometime enemy Dr. Wells to suss out who’s playing host to the entity and why it’s begun violently lashing out. 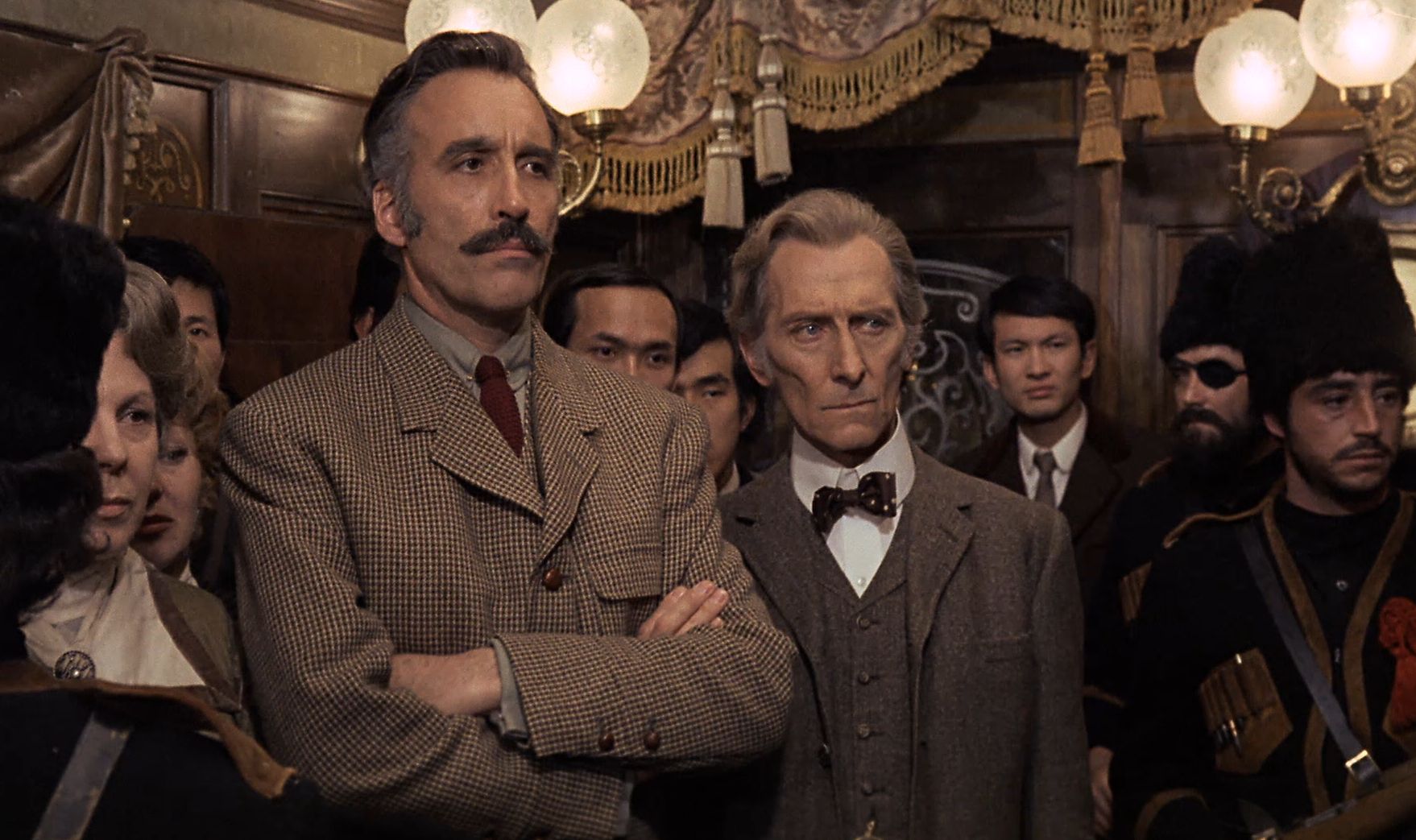 For Hammer fans, one of HORROR EXPRESS’s utmost pleasures is seeing Lee and Cushing work as a team. Typically cast as antagonistic opposites, there’s a warm sense of camaraderie here unlike any of their prior work together. As legend has it, Cushing had lost his wife shortly before shooting began, and when he showed up to the set, quickly realized that he had gotten back on the acting horse too quickly. Though he was prepared to walk off, Lee convinced him to stay, and the mutual admiration that was the bedrock of their relationship both on and offscreen is detectable here in all its leather armchair-like comfort. Conversely, Telly Savalas hams it up in a late film turn as a Cossack officer who stops the train to intervene, and between the three, the 1970s star-wattage is off the charts. But the names on the marquee aren’t the only draw. Eugenio Martin skillfully directs this Western-inflected, sci-fi whatdunnit with a far looser hand than anything churned out by Hammer. Though comparisons are inevitable, HORROR EXPRESS is a far cry from the gothic, drawing room stuffiness of Terence Fisher—with a cosmic weight that widens the scope of the small-scale monster mashes typical of the Hammer Horror brand, and a story that barrels forward as forcefully as its titular, smoke-belching locomotive of frights.
Severin Films remastered HORROR EXPRESS in 2011 with mixed results, and this new 2K transfer from Arrow Video is a notable step up in presentation. The visuals are overall a bit cooler, which seems to suit the film better and gives everything a nice natural look as compared to the burnt yellow cast of the previous release. Clarity and grain are overall more consistent and there’s a noticeable reduction in noise and print damage. The whole is impressive (especially considering that the restorers had to seamlessly combine both a negative and interpositive element) and a welcome correction to the less-than-ideal treatment given this film by Severin. Special features are mostly ported over (but still great) save for a delightful new commentary with authorities Stephen Jones and Kim Newman who give entertaining and insightful background info peppered with their own recollections of the film’s prominence (or lack thereof) while growing up in England. HORROR EXPRESS fans will want to grab the first pressing ASAP, which includes a limited edition, fully-illustrated collector’s booklet with new writing by Adam Scovell. 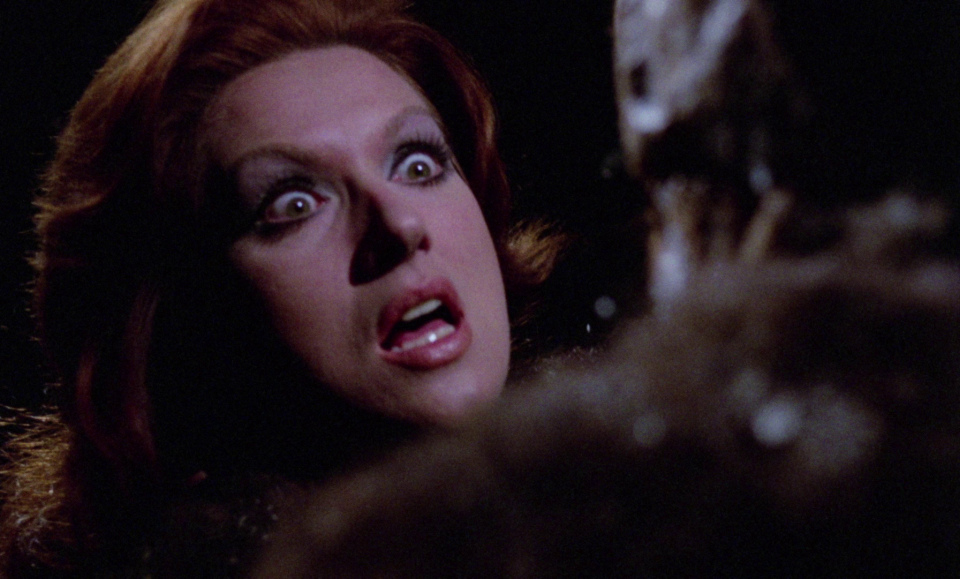 Hammer Horror collides with the cosmic terror of THE THING FROM ANOTHER WORLD and the lonesome outlaw spirit of the Spaghetti Western in director Eugenio Martin’s underrated HORROR EXPRESS. This free-wheeling adaptation of John W. Campbell Jr.’s “Who Goes There?” is a rare cinematic trifle for fans of murder mysteries, science fiction, train-based mayhem, and even zombies! It shouldn’t work, but totally does, and is easily one of the most purely entertaining horror efforts of the 1970s. Arrow presents the film in a bang-up new 2K scan that corrects many of the mistakes present in previous releases, and though new Special Features are slim, this is a definitive package. Fans and newcomers alike will want to book a ticket on this train to terror. It’s a trip you won’t soon forget!