London, UK – Arrow Video is excited to announce the December 2021 lineup of their new subscription-based ARROW platform, available to subscribers in the US, Canada, the UK and Ireland.

The December lineup led with the ARROW release of Maximiliano “Maxi” Contenti’s stylish neo-giallo love letter The Last Matinee, available to subscribers in the US, Canada, the UK, and Ireland. The Last Matinee made its US premiere at Panic Fest (Rue Morgue’s review) and screened at Sitges and the Cleveland International Film Festival. The film debuted on ARROW December 1.

ARROW Stories will be home to a number of exclusive extras this December. Extras for The Last Matinee include an interview with director Maxi Contenti and Killer Attractions: Maxi Contenti & Ricardo Islas in Conversation, a discussion between the film’s director and star Ricardo Islas, director of Frankenstein: Day of the Beast. 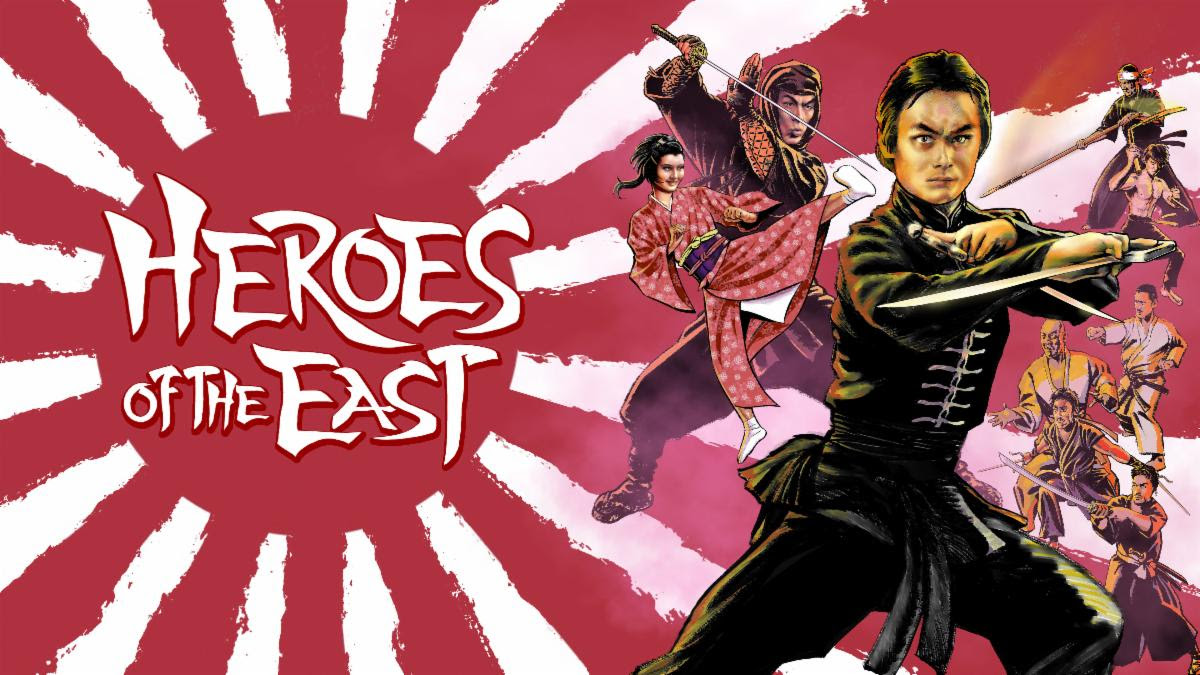 December 1’s Seasonal offerings began with The Sublime Gothic: Edgar Allan Poe adaptations, cursed crumbling castles, decaying minds and ancestral homes, mad untethered emotions and lashings of overwrought doom and mystery – we love to wallow in the sublime gothic at ARROW, and with The Mill of the Stone Women joining our ranks, this seemed the perfect opportunity for a season devoted to the wild, the tormented, the possibly haunted and the aching romance of all things deliciously dark and gothic.

Titles include: Mill of the Stone Women, Your Vice is a Locked Room and Only I Have the Key, The Night Evelyn Came Out of the Grave, The Black Cat, and The Shiver of the Vampires.

Also bowing on December 1 is The Dark of the Matinee, inspired by The Last Matinee. A season full of thrills, chills, smiles, tears, scares and buckets of blood, with films from across the service that are set in the cinema or theatre, The Dark of the Matinee highlights the refuge that the cinema can be for us, but also all the scary things that could happen in there… once the lights go down.

Titles include: The Last Matinee, Blood Theater, Cinema Paradiso, and Tale of Cinema.

December 6‘s Season delves deep into the land of monsters with the Kaiju Collection, the best selection of the biggest and baddest city, village and bad guy stomping giant monsters around. Whether it’s heartbroken and angry hundred-foot tall apes, world-saving friend to all children turtles, enormous injustice smiting stone warriors, or even a gaggle of freaky looking spirits – ARROW’s got it covered. Make sure you’re wearing a helmet as we unleash the Shaw Brother’s spin on King Kong: Mighty Peking Man; all of the spinning, flying and fire-breathing baddie battling Gamera’s adventures; the full trilogy of peasant protector Daimajin’s feudal fights for fairness; and the original three strange and spooky Yokai films, as well as the legendary Takashi Miike’s recent reboot.

Titles include: Mighty Peking Man, Gamera vs. Viras, Wrath of Daimajin, and 100 Monsters. 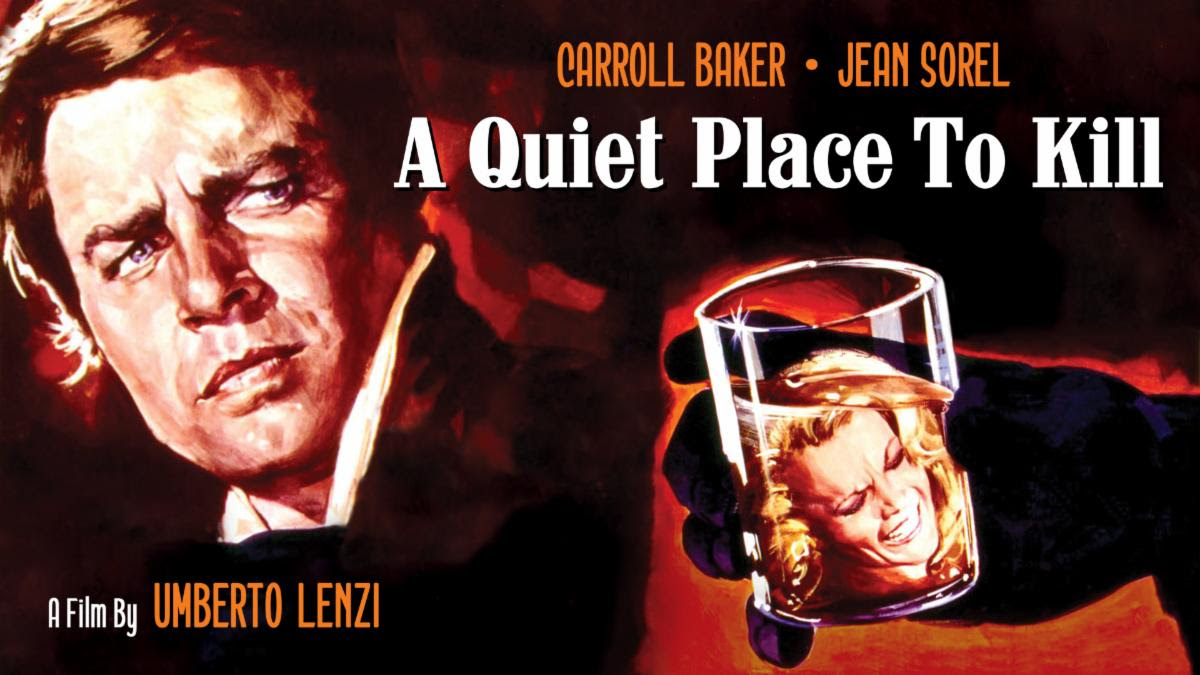 In the run-up to Christmas Day, ARROW offers up an absolute gift of a curated season to give your cheeks a warm and rosy festive glow. So open these presents early (we won’t tell), finish that drink, clear your throat and bust out your best carol-singing voice for our take on a yuletide classic starting December 14, The 12 Slays of Christmas:

Titles include: The Stylist, Threshold, A Ghost Waits, Jumbo, Man Under Table, Sleep, Video Nasties, Gwilliam, The Bloodhound, Heavy Trips, The Hills Have Eyes, and Society.

December 20 closes out 2021 with ARROW’s release of The Brian Lonano Collection, Volume 2. The second half of the lineup launches even more mind-breaking shorts from one of our most favorite ARROW contributors, Brian Lonano, onto the service. Get excited as for the second collection of his stability shredding shorts Brian takes you to insanity… and beyond! 8-bit beats-dropping moon ghosts, giant killer robots, interplanetary war, monsters, grooving in graveyards, Martian visions, Absinthe-fuelled spectral transmissions from beyond the veil, effed up funerals, experimental animation and even a head-thieving witch, hold on flipping tight as Brian Lonano is about to go off and we ain’t stopping him. 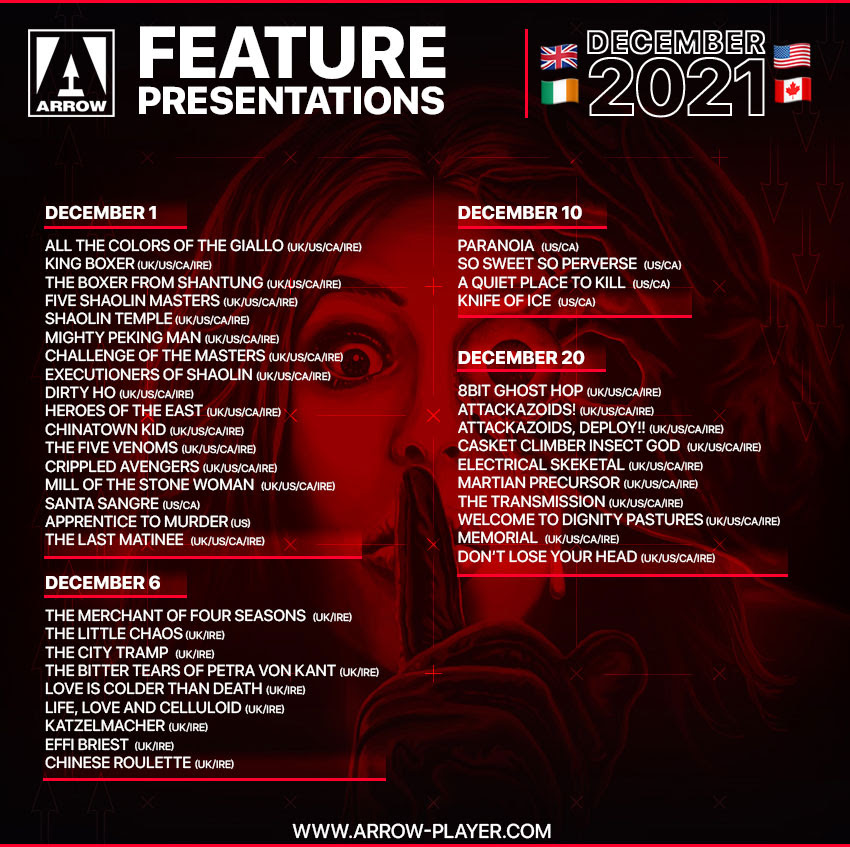