ARCHIVAL HORROR: The Urban Legends and Oral History of “CANDYMAN”

One of the major principles of archival horror is the question of knowledge and who has access to it. Not surprisingly, horror plots are often driven by the allure of forbidden knowledge. Here, a character takes on the role of an intrepid investigator or amateur sleuth poking their noses into dangerous territory and ignoring all the warning signs. And sure enough, someone always breaks open the seal of the scary-looking book. In Bernard Rose’s 1992 film Candyman, based on Clive Barker’s short story “The Forbidden,” graduate student Helen Lyle (Virginia Madsen) is researching urban legends for her thesis when she discovers the tale of “Candyman.” Appearing to those who say his name five times in a mirror, Candyman (Tony Todd) is an urban bogeyman with a distinctive blood-stained hook for a hand, who inspires terror in the residents of Chicago’s Cabrini-Green housing project. As an urban legend, the story of Candyman is a different kind of archive. It is a tale that gets passed around by word-of-mouth, from person to person. Like folklore, these stories blur the line between fact and fiction and between history and make-believe. Often, they tell an alternative history shared among the powerless. 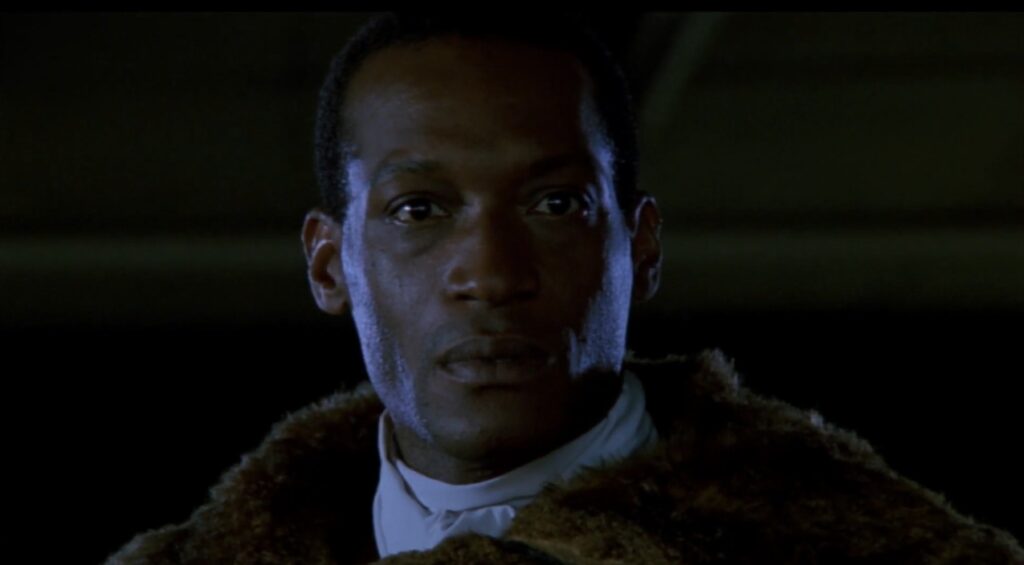 “I am the writing on the wall, the whisper in the classroom.” Tony Todd in CANDYMAN (1992).

Helen’s role as a grad student in the film is important because, in a way, it is like she is auditioning for the role of a respectable scholar in the world of academia. She wants to be taken seriously, but what she studies is, to some, nothing more than children’s stories. Like any good researcher, of course, she heads to the library. And in any good archive scene there is the microfiche machine – which she uses to painstakingly scan old newspapers for mentions of Candyman. During her research, Helen uncovers a link between Candyman, a series of grisly murders and Cabrini-Green. The projects, with their crime and squalor, are their own kind of haunted house, but it becomes clear that what is haunting the residents of Cabrini-Green are the social evils of economic and racial segregation.

Helen learns of Candyman’s origins while out to dinner with her lecturer husband, Trevor (Xander Berkeley), and Professor Philip Purcell (Michael Culkin). According to Professor Purcell, Candyman was born to an enslaved woman in the late 1800s. He became an artist and fell in love with a white woman. When she became pregnant, her father sent a lynch mob after him that sawed off his hand and smeared him with honey from a nearby apiary so that he is stung to death by bees – hence the cruel name of Candyman. His body was burnt and his ashes were scattered on the earth where Cabrini-Green would one day be located. 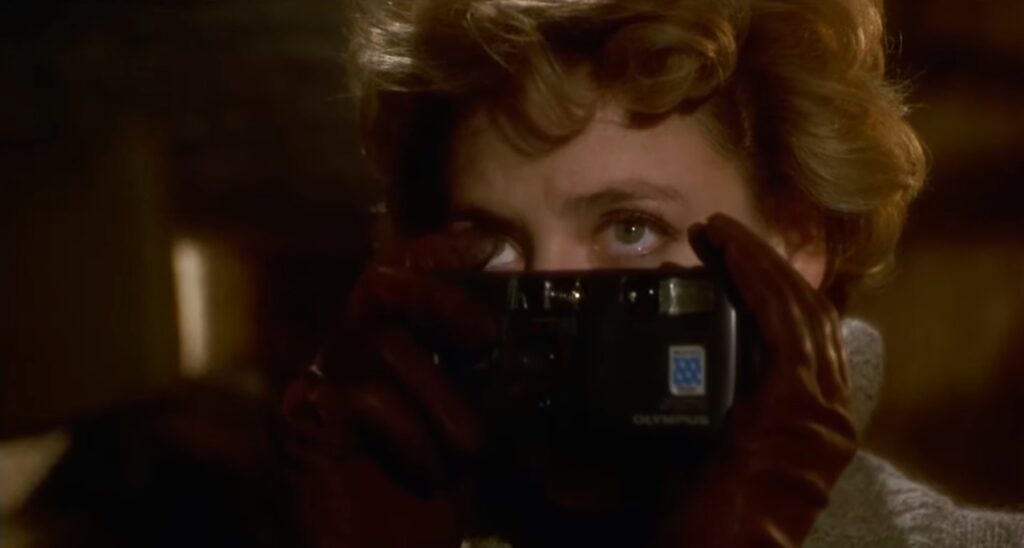 The informal gathering at an upmarket restaurant is the ideal setting for these characters to talk about the urban legend. Their privilege (economic, educational and racial) reduces the grotesque details of Candyman’s tale to idle after-dinner chit-chat, and Helen’s research to “dabbling.” Within the respectable walls of academia, this history is nothing more than a folktale. Helen’s husband and the professor treat the story as a curiosity, but she is both moved and drawn to the sad tale.

For Helen, the traditional archive – the library records and academic experts – is not the full story. Helen’s research needs field work, and her archiving tools are the tape recorder and the camera. Her tape recorder emphasizes the importance of storytelling in making sense of history. Oral history is a living archive. It is a social and interactive form of memory. It’s an archive that encourages different narrators, different retellings and different interpretations. The oral tradition places living people at the center of making the archive. In other words, there isn’t a single official history. Just as important as the details of an event is the meaning the event has on the people who tell it. When Helen begins interviewing the residents of Cabrini-Green, we get a sense of real daily fear – not a half-forgotten legend. Trauma for those in the projects isn’t something that can be overcome and forgotten. Instead, the repetition of Candyman’s name is a warning to always remember. It is a story that even the children must learn. The oral history of the systemic class and racial violence against a segment of the population is forbidden knowledge. Their voices are on the margins, just as Cabrini-Green is marginalized as a ghetto. The tale of Candyman is a forbidden text. It is not written down; It holds the promise of knowledge, but it is a history that hides from itself. The story only comes out as whispers and warnings. Its traces exist in the archive of urban decay – in graffiti fragments and memorial bonfires. 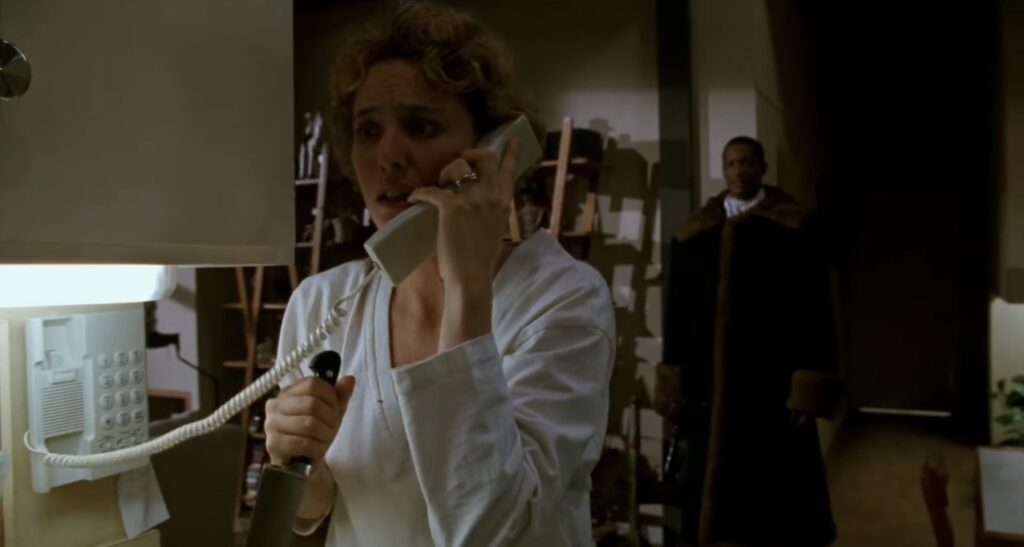 He’s right behind you! Virginia Madsen and Tony Todd in CANDYMAN (1992).

To Helen’s academic community, it is a fairy tale, and later, when she is committed for psychiatric evaluation, a delusion. During one of his lectures at the University of Illinois early in the film, Trevor dismisses urban legends as “bedtime stories.” Horror fans are used to these kinds of putdowns. Helen’s collection of newspaper clippings, slides, photographs and audio recordings tell a story, but her work is never treated as legitimate by the figures of authority around her. She becomes just as much an outsider as Candyman himself.

The legend of the Candyman is passed to a new generation. Yahya Abdul-Mateen II in CANDYMAN (2021).

On the other hand, Helen’s archive is also central to 2021’s Candyman, directed by Nia DaCosta. It prompts artist Anthony McCoy (Yahya Abdul-Mateen II) to retrace his own connection to the Candyman story. Armed with Helen’s tapes and a pair of headphones, Anthony walks the pavement of a gentrified Cabrini-Green. The preservation of oral history in Helen’s archive turns Anthony’s walks into living history. Despite the city’s efforts to transform the area, the voices on the tapes as well as the neighborhood stories Anthony hears, awaken him to a social history that continues to leave scars on the people of the city.