Hollywood writers strike, no more movies, no more horror, what’s the devil to do? Why summon a demon from hell to capture and recruit a new scriptwriter, of course! TERROR EYES is an anthology that is comprised of dreams and personal experiences that are told to engage a thirsty yet frustrated writer who is assigned a new job to write the next big horror movie. Directed by Eric Parkinson, Michael Rissi and Steve Sommers, TERROR EYES was released in 1989 and distributed by David A. Prior’s A.I.P. (Action International Pictures). The film follows protagonist, Eva Adams (played by Vivian Schilling, who also served as co-writer) who is hired by a demon disguised as her boss to write a script for a horror film during a time when she is suffering a case of writer’s block under the pressures of the current writers strike occurring in Hollywood. The lack of horror movies being made displeases the devil! 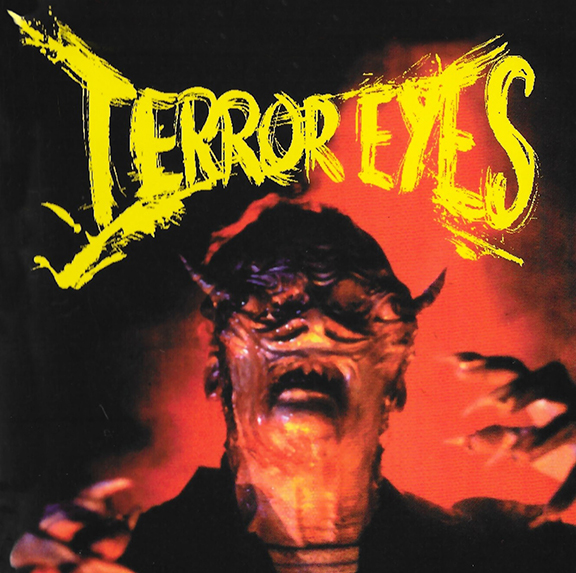 The opening scene/first segment begins with Troy Floyd (Lance August) on his couch, spitting chewing tobacco and playing gin with himself. His naïve wife Starla (also played by Vivian Schilling) is pestering Troy to get ready for a party when a man knocks on their door offering a free “book of life.” While Troy assures the man that they don’t read books, Starla decides to accept the free gift and begins to read it while Troy slowly gets ready. But there’s something peculiar about this book: it has Troy’s name on the cover and describes their own personal life events with eerie accuracy. Details of their wedding night are revealed, and, upon further reading, Starla discovers her husband has been unfaithful when another knock at the door by an agent from hell allegedly claiming they were given the wrong book. Reluctant to give the book back, Starla proceeds to read on, determined to find out how the story ends. Because Troy refuses to acknowledge the validity of the book, he attempts to destroy it but is met with failure because if Hocus Pocus taught us anything, it’s that magical books cannot be damaged. The film’s best gore effects show up in this scene and involve vomit, acid and a poisonous yet colourful fog. Pretty spooky stuff! 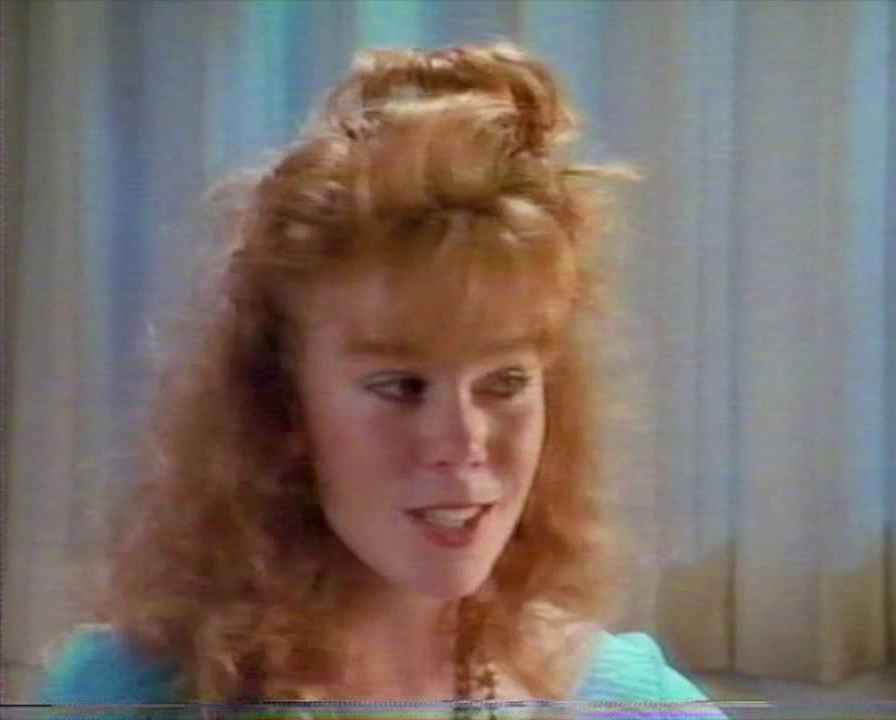 As this dream/segment ends, Eva awakens with a scream, startling her husband Richard (played by Daniel Roebuck who also played the agent from hell in her dream), and quickly attempts to remember the details of her dream for content that can potentially become her new script. Desperate to remember with no luck, Eva and Richard go ahead with their planned getaway vacation to the woods with their friends so she can relax for the weekend.

Once they set up their camping spot and cozy up around the fire with their pals, Julie and Becky leave in search of the river stream to wash their hot dog hands, Scott and Mannie vacate as well and Richard goes to answer nature’s call, leaving Eva alone. As he urinates, the spooky fog comes back and brings with it a cigar-smoking demon. The demon possesses Richard and becomes super horny but after being rebuffed, presses Eva that she must finish her script immediately. Due to Eva’s inability to remember her dream, the demon tries to help her until the gang show back up interrupting her focus. 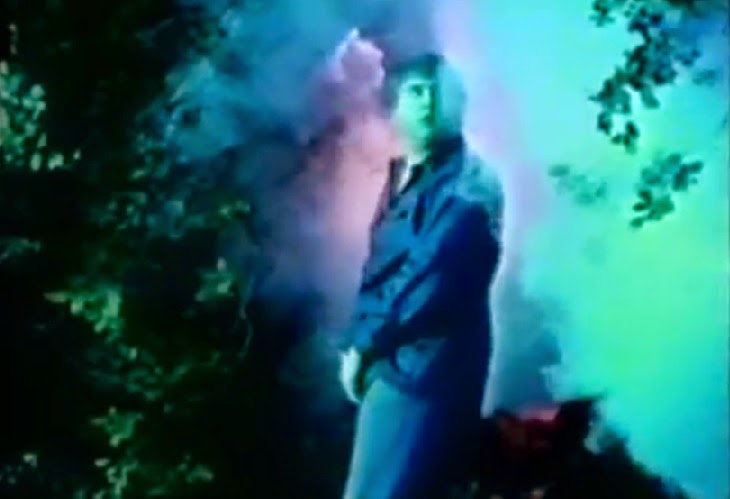 As they sit around the campfire, Mannie (Dan Bell from Wayne’s World) tells a personal story to give Eva some ideas for a story. The second segment takes place at the horse tracks on a night when Mannie, after betting on a losing jockey, owes money to a man named Mike (Chris Roland), who rocks a pretty sweet Bon Jovi blue blazer. He devises a scheme for Mannie to obtain the money with a detailed plan that involves breaking into Mike and his wife’s own home to steal her jewelry from their safe. But when he gets there, he tries to open the safe with the combination Mike gave him with no success and instead finds his dead wife. So he then runs away, somehow enters an underground tunnel from a dumpster in an alley that leads back into the horse tracks then realizes time went by that he missed out on and its suddenly the next day, or is it?

Back to the campsite, it’s now Julie’s turn to tell a personal story. The third and final segment opens with her sister Alex (Harri James) competing in a chess tournament. Alex is notably one of the best female chess players in the world but she is also renown for calling on the boycotting of gratuitous video games that are demeaning to women manufactured by an empire led by a man named Rubenstein (Phil Lowey). After pleasing the media outside preceding the game she just won, she gets into her car to quickly notice after she’s locked in, that the man behind the wheel isn’t her usual driver. Alex is taken to a Rubenstein’s mansion who is indignantly threatened by her outspoken advocacy against his products as her attacks on his games in the news is damaging his reputation and business. So his solution for how to deal with Alex is to place her in his own diabolical game, one that I might add most definitely fuelled the idea for escape rooms. Alex must win in order to survive by solving riddles, evading traps, and escaping other lethal obstacles. Looks like she’ll be utilizing her chess abilities in a real life rat chase! 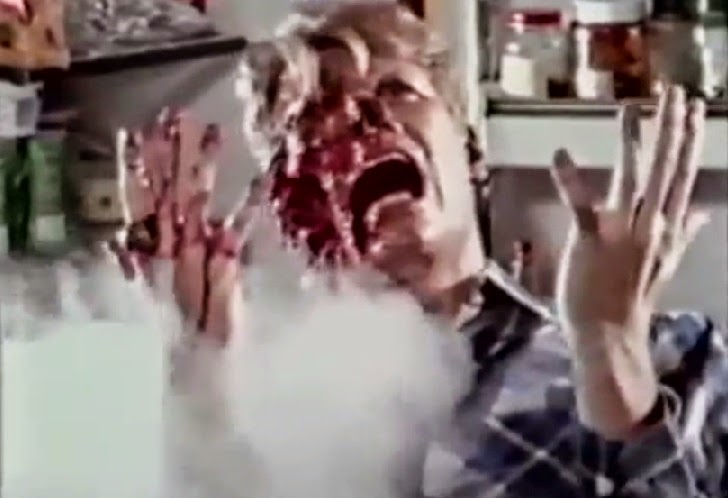 Demon Richard is fed up with these stories as they lack gore and this is another great scene when he lets his anger and true demonic form surface, spawned out of impatience because he wants his story now, wah! TERROR EYES is a quirky and lovable anthology that is a must own on VHS, even if it’s solely for the amazing cover art. I love that the actors play multiple characters and I would also like to applaud Daniel Roebuck’s endearing abilities as the demon. It’s not every day you get to play a zany cigar-smoking devil-man and do it well. 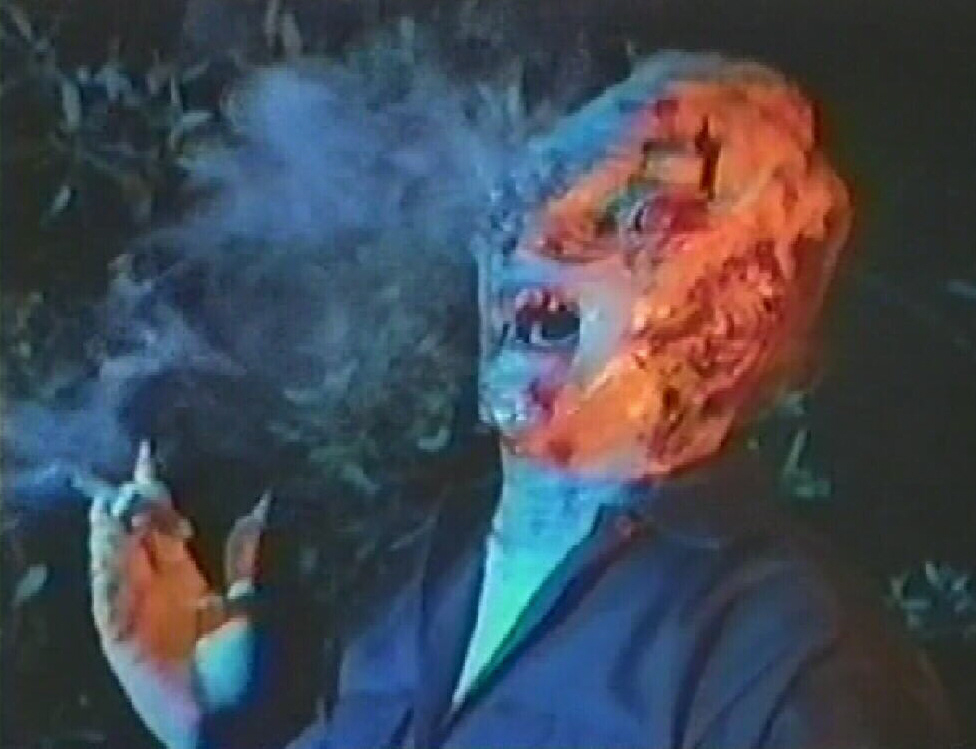