The world is sorely lacking in the amount of horror western crossovers, mostly because audiences just aren’t ready for gunfighting ghouls, whiskey wraiths and literal dust devils. GHOULTOWN doesn’t give a shit whether you are ready or not for their music, which I’ve decided to describe as the song “Ghost Riders in The Sky” cranked up to murder. 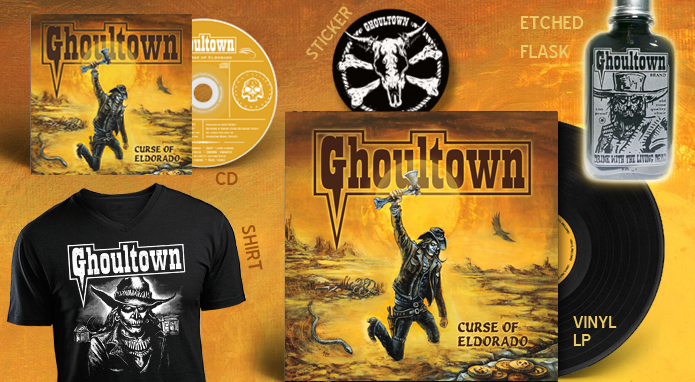 Their upcoming eighth album, CURSE OF EL DORADO, has an Indiegogo campaign where you can help them stay the independent artists we’ve come to love (and fear.) If the campaign is successful, they will be able to complete the album for a late October 2020 release. Of course, for many of us, altruism is for city folk, so backers get some sweet merch like t-shirts of etched glass flasks.

Throw a coin to your blood-soaked barkeep, then donate to GHOULTOWN’s Indiegogo here.