When the average horror fan talks about final girls, Lisa Wilcox’s recurring character of Alice Johnson (in A NIGHTMARE ON ELM STREET 4 & 5  doesn’t come up as often as it should. And thirty years after the premiere of DREAM MASTER broke NOES records at the box office, it’s time I humbly use my little internet powers to remedy that, and give credit to Freddy’s foe who not only served as a worthy adversary, but an overwhelming inspiration to both young boys and girls everywhere who didn’t have it so easy growing up.

As a matter of fact, I was one of them.

Alice Johnson’s journey towards her end-game battle with Freddy is unique among her ’80s horror movie peers. In many of these films, the “Final Girl” concludes her screen time with some sense of strength and badassery for overpowering her antagonist – be it a supernatural foe or a more mundane one. However, the NOES franchise has always paid special attention in giving their heroines an extraordinarily powerful presence from start to finish – something which I, as a female, have always admired. Sure, they’re goddamn scared of getting killed in their sleep because, come on, who wouldn’t? But, in the famous words of SCREAM’s Sidney Prescott,  they certainly never came across as some, “big-breasted girl that can’t act who is always running up the stairs when she should be running out the front door.”

Nancy had a strong will, Jesse had the power of love, and Kristin had power. Alice, while not at first possessed all these traits, eventually brought Freddy to his knees (or rather, torso) in the finale of DREAM MASTER. And while the battle was glorious, it was the road that led to it that left my adolescent self inspired to be a role model rather than a victim.

Alice didn’t have an easy home life. Her mother was dead, her father was an emotionally-abusive drunk, and she lacked self-worth in both appearance and strength, never seeing herself good enough or worthy to be all that she could possibly be. We see a few of these examples early on during the first shots at Springwood High via Alice daydreaming about hunky Dan and the afterthought of how ridiculous it would seem for Mr. perfect to give her a second look. Later that evening, after her father criticizes her efforts at a home-cooked meal, Alice travels off in her mind again, fantasizing letting the beast out on her asshole parental unit. But, it’s all just a daydream and again, she crawls back into herself. 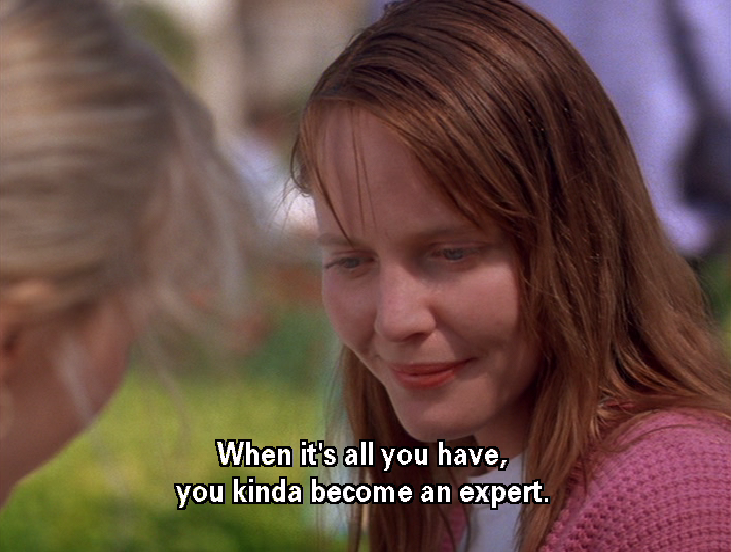 Fantasies turn to nightmares with a traumatizing introduction to Freddy via Kristen Parker, with the cherry on top of watching her best friend die a pretty damn horrible death. And as Alice’s small circle of friends and safety dwindles (including her brother), she slowly begins to change. Now, as the film progresses, the plot makes it pretty clear that Alice is becoming stronger with each of her friends’ deaths, preparing her for the final showdown with Krueger; And holy burnt balls of Springwood, does she become one giant badass! But I firmly believe Alice held those traits the entire time. In the face of death and despair, one finds resilience and strength in places you never knew you had. From the depths of severe social anxiety and hopelessness rises one of the most fierce forces of heroism across the board in the entire ELM STREET series. (Not to take anything away from Nancy Thompson (another ass-kicking final girl), but Nancy from the get-go was clearly a strong-minded individual, whereas Alice had to go through some rough shit to get herself there.)

During my childhood and into my teens, my mother was absent from my life, and when I did hear from her, it was to tell me how much of a worthless human being I was. My father, who solely raised my brother and I until my Grandmother stepped in later to help, had a drinking problem as well. And unfortunately sometimes… cruel words would escape his mouth through the language of alcohol. Because of these circumstances, I began to shut down into a quiet world where I mainly kept to myself and retreated into a void of horror movies and fantasies as an escape from my surroundings.

When I came across DREAM MASTER, it quickly became one of my favourites as I obviously resonated with Alice’s character. But most importantly, Alice Johnson taught me that even in your darkest hour, no matter the circumstances (hell, she lost almost her entire crew), that fear and submission into a world of sadness is not an option. Well, technically it is but, when faced with adversity, you can either lay down or put one foot in front of another and live the best life you can, kicking ass along the way.

That said, Lisa Wilcox’s Alice Johnson deserves some applause here for being one hell of an inspiration, for not only myself but for other individuals in similar situations. Who would have thought a positive influence such as this would come from a film that focuses on turning teenagers into cockroaches and squeezing the bug juices out of them?

Well, it happened here and all I have to say is, thank you.