When Benjamin Christensen’s iconic documentary-style silent film Häxan was originally released across Europe in 1922, live orchestras provided the score. By utilizing a highly curated selection of compositions from the likes of Schubert, Gluck, and Max Bruch, Häxan and its dark, witchy content, were conveyed through a very specific lens. However, as time marched on, Häxan’s lack of a firmly established score opened the door for new and diverse musical interpretations to take hold.

One such musician to heed the call of Häxan’s deafening silence is the Canadian musician Alia Synesthesia. Along with being a talented multi-instrumentalist, Alia also holds the special distinction of being a classically trained operatic singer, composer, and producer. Breathing fresh new life into the iconic horror classic, Alia blends her signature dark sound, ethereal vocals, and electronic music with Häxan’s otherworldy and engaging cinematic exploration of witchcraft. To learn more, Rue Morgue recently sat down with Alia and spoke all about her journey through Häxan, her unique artistic project Horror and Opera, and the interesting parallels and themes that keep the film eternally relevant. 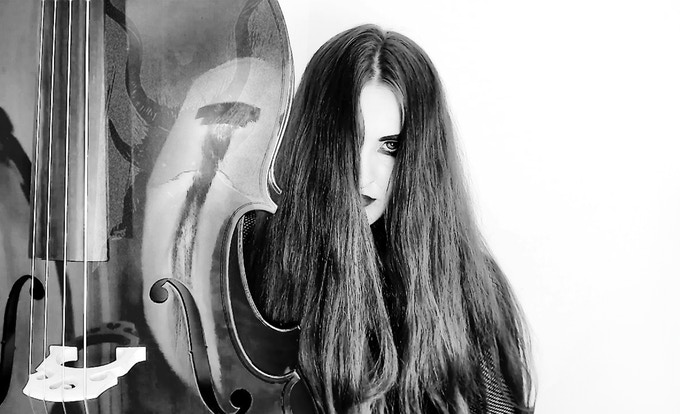 Tell us a little bit about how this unique project came to be.

I am a classically trained singer, but throughout my singing career, I was never a part of any opera companies or production. Even though at some point I tried when I was much younger. But then I became kind of disenfranchised a little bit with the mainstream opera stuff. And then I basically started doing my own music, my own thing, and that took me even further from the classical world.

So at some point, I was just kind of sitting and thinking, “Wouldn’t it be fun to have a fictional opera company?” And it was already during COVID, so people mostly were doing entertainment online anyway. No one would know the difference, essentially. So I made the website for this fictional project, Horror & Opera, which is assumed to be a virtual opera company with the theater and everything. Or more like it pretends to be that. And then I’m like, “Okay, so what will I be doing with it?” So for me, singing and composing for silent films made a lot of sense.

I love classic horror. There’s something to be said about how early horror portrays the horrific. People were still just figuring out what the genre was. Now, in 2021, we already know what horror is, what a slasher is and we sort of expect something from the genre. Back then, it was just people experimenting with film and being like, “Well, how do we portray the devil? How do we portray the witches and what is it going to be about?” So I found this kind of connection between early horror cinema and this fictional operatic company that I’ve created. That’s how it was born.

The pairing of the two is so fantastic and really highlights the dramatic nature inherent in both. You took things to the next level for your most recent project by creating an original score for the horror classic, Häxan. What was it about this film that attracted you and inspired you to create an entirely original film score for it?

Well, I think I was always fascinated with that film. I think the first time I saw it, it was pretty anticlimactic. I was in some goth club and you know how sometimes they just play old films or films on the TV while music is playing? I was just like, “What is this!?” So, I just started watching it while being in the club. And, I didn’t know what the name of that movie was until I later approached the bartender and asked her. She was just like, “It’s Häxan.” I knew I needed to research that.

I really appreciate the film and what it’s doing. It combines these elements of a macabre core with the devil’s dancing while it’s kind of tongue-in-cheek as well. It also has this element of a documentary to it, right? Essentially, the director, Benjamin Christensen was trying to make a case for why witches weren’t really real. I found that that was a very interesting combination and I became fascinated with Häxan for a while and then decided this should be a first step. 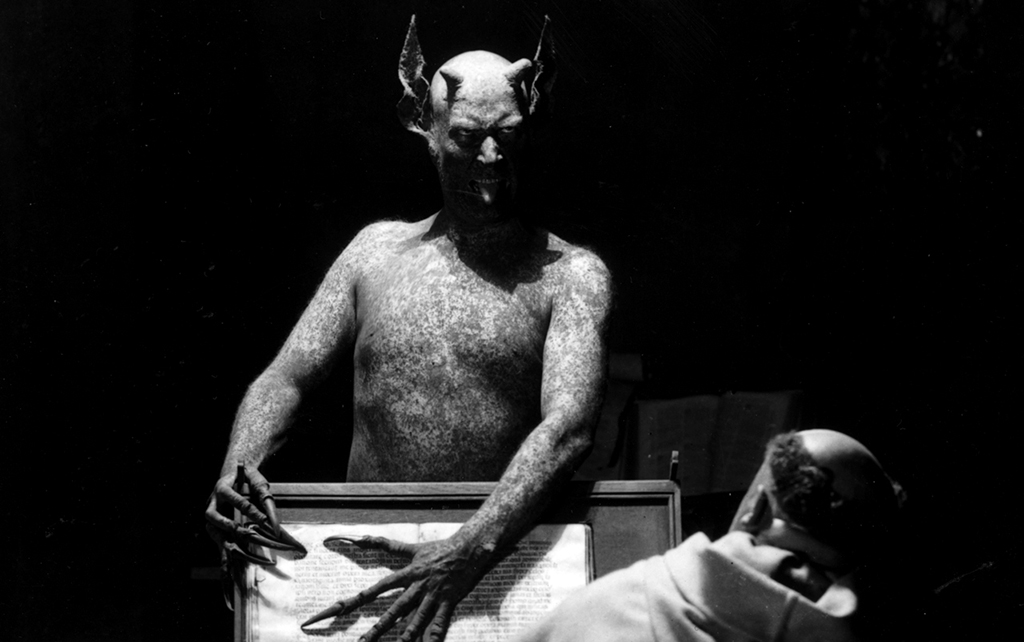 Your music defies genre and you have a wide range of skills. Because of that, how did you approach the scoring aspect of this project?

Well, in music, I think I’m mostly guided by the same methods that writers are. For me, music and art are about storytelling. It’s interesting to talk with other musicians about it because a lot of musicians start with the actual music. You know, what sounds good and what is the logical continuation. And, they kind of think about music within the musical like a type of creative expression within the genre.

For me, it’s mostly like I’m trying to express a story in music. So, when I think about the film and what the scene demands, I sort of transcribe that into music as well. When there’s a scene of devils dancing, what should that sound like? Maybe tribal, a bit gritty, a little bit of dissonance…all of those things.

I think as a storyteller, maybe even as a director, because I approached it scene by scene. In terms of skills, I’m always trying to use everything I have in compositions. I mean, within reason of course. For instance, I started learning cello a couple of years ago and for this, I was like, “Oh yeah, cello is going in there.” My skills are a little bit limited there and I’m not like a great cellist, but I will try to make it work. [Laughs]

There are some wonderfully eerie and mysterious sounds in your score. What did you use in this composition to achieve just the right spooky sonic palette?

I didn’t use anything that people wouldn’t recognize. There are synthesizers in there, along with bass. There’s also cello, but again, because my skills with cello are fairly limited I cannot play amazing, beautiful, soulful melodies as my cello teacher does. I’m kind of making up for that with grittiness and production. I also produce my own stuff, so [if] everything doesn’t sound quite right, I’ll just produce it until it does. I received a couple of comments of people saying, “This sounds like a sitar.” And I’m just like, “Well, it’s not. It’s a very, just very over-processed cello.” [Laughs] 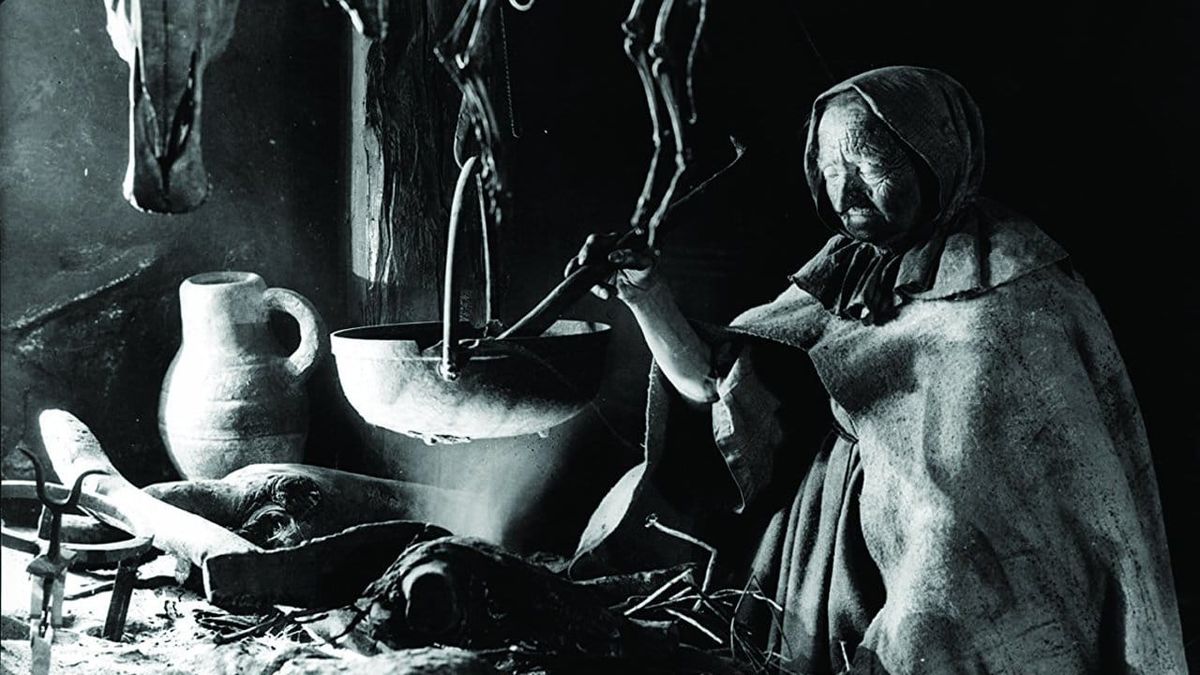 Your music got me thinking about Häxan in ways I never have before and the connections that can be made to the history of women in electronic music. It’s no secret that the persecution of women as witches was largely rooted in patriarchal fear and fear of women who didn’t conform to accepted social norms. Similarly, electronic music was (and still is) very male-dominated with a strong history of women using their music to push back against what was expected of them. With this in mind, can you relate to the witches of Häxan in any way?

Oh yeah, I absolutely can relate to it. It’s interesting that you mention the history of electronic music. Surprisingly a very similar parallel is running through operatic productions too, which is pretty strange. Opera used to be a male-dominated field as well, despite the obvious fact that women have a higher vocal range, [and] there is a whole history with the castrati in Italy. Men were trying to compensate and have a higher voice to naturally make up for [playing] female parts and roles. It was a weird way to go about it though, okay? [Laughs]

One of the contemporary artists that I really respect who also pushes against the expectations of the pretty and the operatic is Diamanda Galás. She is terrifying! When you compose only 2% of the music industry, there will be expectations built for you, but not for others, you know? A lot of women artists, they fit into those expectations as well and further enforce the bias, because they feel like this is the music that they need to be making.

I struggled with this at first, when I felt like I was really getting the short end of the stick for just being myself. But at some point, with experience, this kind of fades and it becomes about you making the art instead of waving your fist at everyone who’s just comfortable being themselves. One of the most interesting comments that result from a similar bias is how sometimes when people listen to you sing or listen to you play, they instantly jump to one of the four predictable operatic artists. They’ll be like, “Oh, you sound like Nightwish!” Even though my music sounds nothing like Nightwish. [Laughs] That can be a little bittersweet as well. I always appreciate the compliment, but on the other hand, anything that resembles a mold, they’ll try to put you in it.

You’re a fan of horror so I’m dying to know, what are some of your favorite scary movies?

I’m a huge fan of horror. Ever since I was little and my mom was like, “What is wrong with you?” [Laughs] Even today when I’m like, “Let’s watch a horror movie!” and my friends are like, “But we watched one yesterday.” I’m still like, “More!” Since I got a Shudder subscription I’ve found some real gems. I really liked Open 24 Hours. It’s a recent one with a very strong female lead, and I really liked the deception and how the movie toys with what you understand about mental illness. I also really liked Satanic Panic. I do also have a soft spot for ’80s horror, especially the B variety. Something that’s not a cult classic, but a good popcorn watch. Oh, and of course, Elvira: Mistress of the Dark.

Where can people find and support your Häxan project?

This project was successfully funded on Kickstarter and, the funding is already done. Originally this project started from a live stream where I had a bunch of instruments with me and the film playing. That had its challenges, obviously. [Laughs] I mean, I started setting up five hours before the stream started and I was still buried in cables and everything was out of control. So yeah, another Kickstarter is over and the film was just made available to the public last week after I fulfilled all my Kickstarter promises. It can be purchased at horrorandopera.com and is available on DVD, USB keys, or as a download if folks are interested.