5 Reasons You Need to Watch “The Velvet Vampire” Right Now

50 years ago this June, the planet Earth was blessed with THE VELVET VAMPIRE (aka CEMETERY GIRLS). Written and directed by Stephanie Rothman, it stands out as one of the only films in the queer seductress vampire sub-genre that was made by a woman. Rothman is known as an exploitation filmmaker, known for low-budget movies like It’s a Bikini World (1967) and The Student Nurses (1971), and was active from 1965 to 1978.

The film follows married couple Lee (Michael Blodgett) and Susan (Sherry Miles) in an encounter with the mysterious Diane LeFanu (Celeste Yarnall), who seems to be driving them apart and invading their dreams with her fun vacation activities and vampy sex appeal. In honour of this anniversary, here are five (mostly spoiler-free) reasons you should lie in the luxury of THE VELVET VAMPIRE in 2021!

THE VELVET VAMPIRE is unique in its environment. Instead of a gothic castle or Eastern European woods, our vampire, Diane, lives in a modern mansion in the middle of the scorching California desert. Turns out all a vamp needs to protect herself from those harsh UV rays is a floppy hat and nice gloves! The impenetrable forests of the Carpathian Mountains are replaced by the Mojave and the ghost towns from which villagers fled or were exterminated and abandoned mines whose workers met their vampiric doom a century earlier. 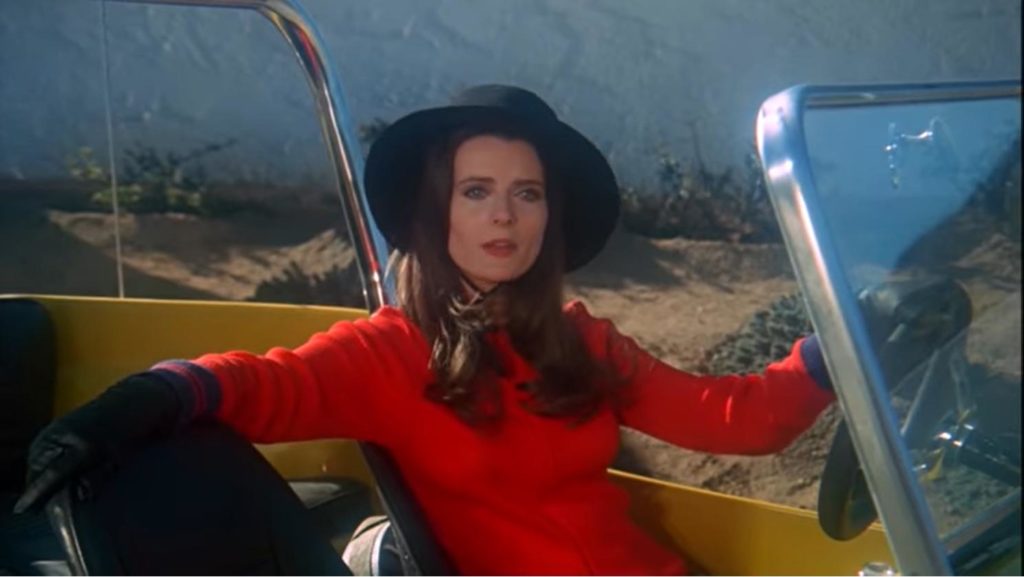 The world of THE VELVET VAMPIRE is not a distant, folksy past, but the world of the present. A world of shag carpets, leopard print bikinis, and car troubles. The desert setting offers not only a unique backdrop but is a large part of the eroticism of the film – where else could you be seduced by hearing a woman’s vagina compared to a dune buggy?

The haunting score by Clancy B. Glass III and Roger Dollarhide shifts between eras, simultaneously looking to the past, present, and future. The opening theme, a gentle piano melody in the minor key in the opening scene, gives way to a discordant cacophony. A series of surreal dream sequences pepper the film, as Diane worms her way into the subconscious of the unsuspecting married couple. This dream world is occupied by a simple repeated finger picking guitar song that wouldn’t be out of place on any weird old psychedelic record your uncle might have in his attic. Finally, during the climatic chase scene, as Susan returns to her city, synths enter the score in a big way. The early electronica cements the fact that THE VELVET VAMPIRE exists at a crossroads in culture and history: the old is confronting, and, in turn, being confronted by the new.

In exploitation films of this era, it isn’t unusual to hear horror stories about how the performers were treated, especially in regards to scenes featuring sex and nudity. In THE VELVET VAMPIRE’s case, the opposite is true. According to Celeste Yarnall, who had given birth seven months before filming, she had her infant daughter, who was still breastfeeding, with her during production. The racy scenes were filmed on a closed set with minimal crew members. Although this might sound like the bare minimum today, this happened in this midst of second-wave feminist struggles around labour, sexuality, and family. The remarkableness of Rothman’s approach serves as a reminder of the strides that have been taken since then, and what a pioneer she was. 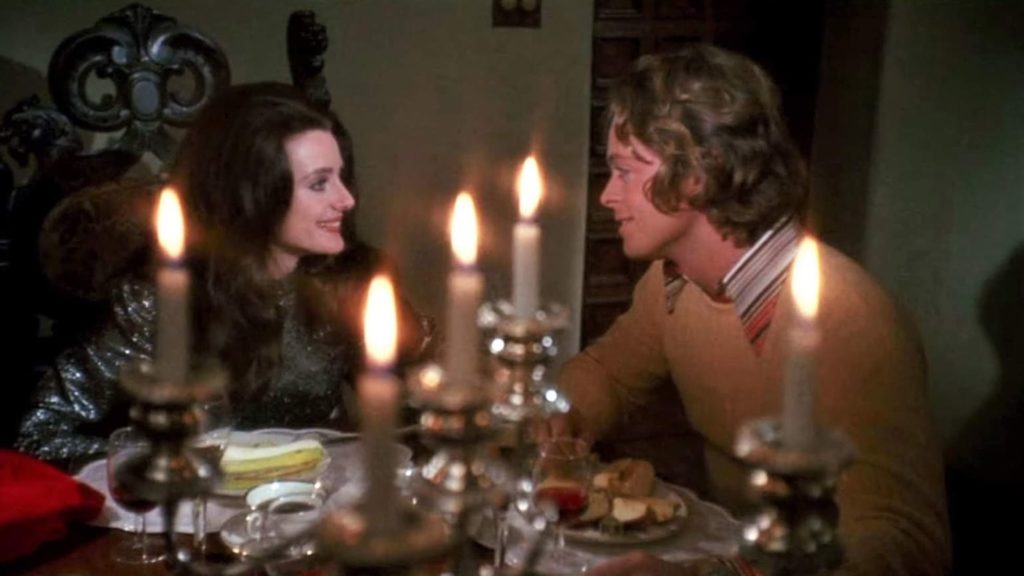 THE VELVET VAMPIRE is right up there with Sleepaway Camp and My Bloody Valentine when it comes to spectacular horror movie outfits. The carefree summery dress of Lee and Susan matches the bright visuals of the film, and leaves them exposed to not only the sun, but to Diane. Diane, on the other hand, looks effortlessly cool in what must have been incredibly uncomfortable outfits, as she’s never seen in the hot desert sun without a sweater, long pants, a wide-brimmed hat, and (more often than not) stylish gloves. Her palette is diverse, but consists of lots of classic vampire blood red, to match her iconic bloodstone necklace. Night looks in general give Diane more freedom in silhouette, they allow her to be more carefree in her styling as she harnesses her sexuality against her guests, from flowing red lingerie to shining silver evening gowns. Who is the glitterier ghoul? Diane LeFanu from THE VELVET VAMPIRE or Elizabeth Bathory from The Daughters of Darkness? Diane’s ‘fit is clearly lifted from Elizabeth’s, but it’s a toss-up as to who wore it better. 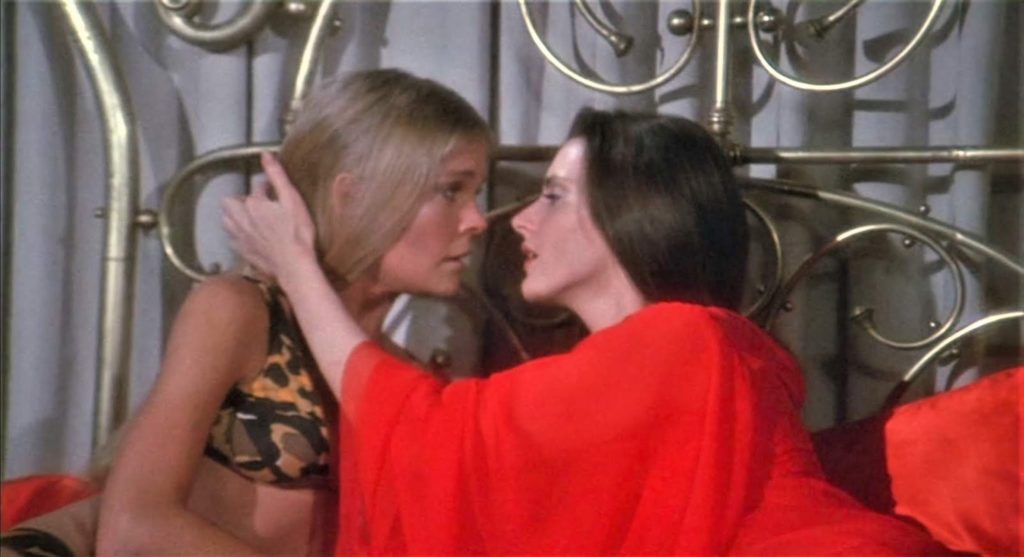 It is a horror movie after all. Despite its modernity, THE VELVET VAMPIRE owes a lot to its gothic genre roots. The opening scene presents Diane as a would-be assault victim, only to turn the tables turned and have the prey become predator. The scares comes from the action itself, but moreso from the nonchalance with which Diane composes herself after her meal, casually washing off blood in a nearby fountain. A key aspect of the film is a series of shared dreams between Lee and Susan, infiltrated by Diane. The couple lies in a bed in the middle of the desert only to be seduced away from each other as the dreams become more and more disturbing. THE VELVET VAMPIRE is a great example of daytime horror, and while horror sequences are found in darkness, in the environment of this film, darkness is something one steps in and out of, not something one is mired in.

THE VELVET VAMPIRE is available on Shout! Factory TV.